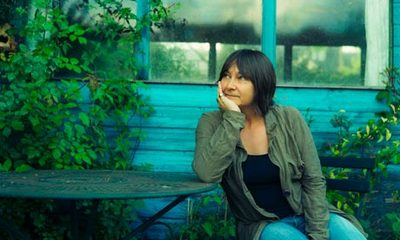 I was fortunate to be able to see Ali Smith interviewed at Oslo's Litteraturhuset earlier this month. I've been a fan of Smith's work since I happened to pick up a well-thumbed copy of The Whole Story and Other Stories at a used bookstore in Davis, California several years ago. Smith's work has twice been short-listed for the Orange Prize and the Man Booker Prize. When I heard she was coming to Oslo to promote There But For The , her latest novel and eighth Norwegian-translation, I couldn't wait to see her.

"The next time you have a whiskey, drink to my dad."

At this the audience broke out in applause. Smith nodded and raised a pretend glass in salute to the crowd. The gesture summed up the mood of the evening, more a conversation in a pub with a mentor than a lecture given by an award winning author.

Oslo's Litteraturhuset lecture hall was full of avid Smith fans on the evening of 11 April, eager to hear about the famed Scottish author's writing process and philosophy. After two introductions, one in English and one in Norwegian, Smith took her place onstage.

She sat in one of two chairs, each angled slightly toward the other, and in doing so, was forced to duck under an encroaching microphone stand. Her movement, while not quite graceful, was confident. She wore cuffed jeans and heavy brown boots, and her dark hair swung around her face in a plain, perfunctory bob. Over the course of her interview, conducted as a conversation with book critic Margunn Vikingstad, Smith displayed a delicate vigor. Her voice was both soft and tough as it waxed and wound around words, and her Scottish accent made every declaration sound both optimistic and final, as though no one could or would want to argue.

"We forget the formative moments of life until much later, but then they always have revolved around something kind."

"Clichés are a dead language, but they're wonderful. We need them. They offer a shared truth... an 'Oh good, that's happened to you, too.'"

In her chair, Smith sat with scrunched shoulders and one foot tucked up underneath herself. Her eyes sparkled as she recounted her early days as a writer, when the kindnesses of people like one of her first Cambridge landlords ("Now there was a versatile man. He was a plumber who also made hats!") nurtured her. He didn't mind whether she couldn't pay the rent. He'd take what she could pay, drink a cup of tea with her and her roommates, and then leave with thanks.
In two hours onstage, Smith referenced everyone from film director Alfred Hitchcock to British actor David Niven, from "comic soprano" Gracie Fields to author Katherine Mansfield. Smith also spent a great deal of time explaining to the audience about the process of translation when it comes to creative work.

"You must trust your translator to rewrite the book and make it alive in his or her own language. It thus becomes a better book," she said. Her Norwegian translator, Merete Alfsen, was on hand to read portions of the new book aloud in Norwegian, as well.

"I'm sorry, but whenever anybody asks me that, I always think of an author interview I went to once," she said. "[The author] was an older lady, and when someone asked her that question, you know, 'How do you write?' she answered, 'With a pencil.'" At this Smith giggled again and slapped her own knee as the audience laughed along with her.

But the details of her writing process ended up surprising me. She said it's all about "close editing," line by line as it comes. She edits each sentence as she writes it, going back over every word.

While she admitted that this process is a slow one, by the time she finishes a page, the product has been through multiple edits and reads much stronger than it otherwise would. I suddenly felt self-conscious about my own writing process, one which is often fueled by spates of unedited, binge-writing. I thought about the opulence of an unpruned draft and shuddered, then made the mental note to check myself the next time my pen attempts to run away.

At the end of the night, when Smith offered to take questions from the crowd, she seemed surprised but delighted to receive praise from several audience members. One woman stood up, her quaking voice amplified by the supplied microphone, and said, "A bunch of us were discussing before the lecture what it was, exactly, that we like so much about your books."

"Oh," said Smith, earnest and curious. "What did you decide?"

"It's the sense of optimism in your writing, something that is not part of the modern trend in literature," said the woman, buoyed by the immediate sounds of agreement from the rest of the audience. "We read [your stories] and we think, 'Good, it might be alright.'"

Honored, Smith responded with her own philosophy on optimism.

"It's fashionable to be cynical--but it doesn't get you anywhere. Playfulness and curiosity are the stuff of life, not death... [My stories are] about how dark things are, and about how light we make them."