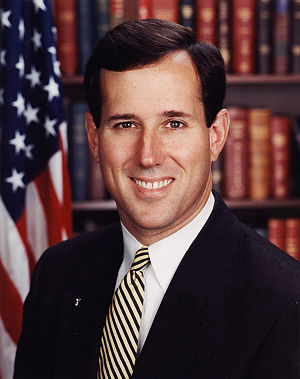 Today, Rick Santorum has a chance to be the GOP candidate for President.

On the other hand, it's EASY to come up with Rick's words on the topic. I may be a registered Republican, but contrary to the cliched image of my party, a bunch of red necks in lockstep with the bombastic conservative talking heads on TV and the radio, I vote based on issue, not on the big letter R next to a candidate's name.

So, just for fun, I'll let the man himself make it abundantly clear why he will never receive my vote... and all based on the issues.

The issue: Gay Marriage (and Sex, in general)


Good news. The Supreme Court has said that I have the right to consensual sex within my home. My Fourth Amendment right to privacy secures that. Personally, I'd prefer it if my President spent more time thinking about positioning our country for betterment and progress, and less time thinking about my sex positions. And I'm straight. I can't even imagine how much the gay community wishes their bedroom habits were no longer a topic for debate.

"[Contraception is] not okay. It's a license to do things in a sexual realm that is counter to how things are supposed to be." 2011


Young American women may not realize how close we are to finding ourselves shoved backwards into the realm our mothers and grandmothers fought and struggled to rise above. It's easy for conservative men (religious men) to talk this way. They're not the ones who get pregnant. If Rick Santorum could get pregnant, he'd buy a lifetime supply of condoms and shut up about it.

"In every society, the definition of marriage has not ever to my knowledge included homosexuality. That's not to pick on homosexuality. It's not, you know, man on child, man on dog, or whatever the case may be." 2003


The slippery slope. I can play that game, too. If we allow Christians to marinate in their own ignorance, they'll start thinking that openly gay men are simply closeted pedophiles. Etc.

"The radical feminists succeeded in undermining the traditional family and convincing women that professional accomplishments are the key to happiness." Excerpted from Santorum's 2005 book It Takes a Family .


Even better, this is the book he now claims was co-authored by his own wife. But he didn't give his wife authorial credit at publication time.

"We are seeing the fabric of this country fall apart, and it's falling apart because of single moms." 1994


Single mothers are heroic. If anything, they need more help. Not less. As a woman, I can tell you that, if I were in need of welfare support because raising a child was keeping me from working enough hours to support my family, and because the father of that child wasn't helping me parent (even in terms of cold, hard cash), I would exercise my God/Mother Earth-given right to claim that child as entirely my own. Oh, and there's the Fourth Amendment again.

To put more women in combat roles "could be a very compromising situation, where people naturally may do things that may not be in the interest of the mission because of other types of emotions that are involved." 2012

"Men have emotions when you see a woman in harm's way...[a] natural inclination to not focus on the mission but to try to be in a position where you might want to protect someone."


Santorum's probably right. Emotions get in the way. That's why, when there are only men in combat, guys leave their buddies behind all the time. No emotions. In fact, I'm pretty sure that's the Army's motto: Leave as many men behind as possible. (Thank you, Jon Stewart.)

More than 140 women in the American military have lost their lives in Afghanistan and Iraq. That number would be higher, but male soldiers have gone out of their way to save the girls. Right, Mr. Santorum?

The issue: The Separation of Church and State

"Earlier in my political career, I had the opportunity to read the speech, and I almost threw up." 2011


Let me show you what made him gag:

"I believe in an America where the separation of church and state is absolute -- where no Catholic prelate would tell the President (should he be Catholic) how to act, and no Protestant minister would tell his parishoners for whom to vote -- where no church or church school is granted any public funds or political preference -- and where no man is denied public office merely because his religion differs from the President who might appoint him or the people who might elect him." - John F. Kennedy At The Greater Houston Ministerial Association , 12 September 1960 -- Rice Hotel, Houston, Texas

Reasonableness. If you can't imagine an America where religious rights groups aren't invited into the oval office for consultation, let me remind you that, soon enough, we may have a President who is a Mormon. A Jew. A Muslim. An Agnostic. An Atheist. Still want that President calling on his "religious advisers," Mr. Santorum?

"The question is [whether] that human life [is] a person under the Constitution? And Barack Obama says no. Well if that person -- human life is not a person, then -- I find it almost remarkable for a black man to say, 'We're going to decide who are people and who are not people.'" 2011


Remarkable because black people once weren't considered people under a law written by white people. It's even more remarkable that Mr. Santorum doesn't think calling on our President to consider the issue of abortion as a black man should is, at best, ignorant, and, at worst, racist.

"I don't want to make black people's lives better by giving them somebody else's money; I want to give them the opportunity to go out and earn the money." 2012

The US Census declared that in 2010 15.1% of the general population lived in poverty:

About half of those living in poverty are non-Hispanic white (19.6 million in 2010), but poverty rates are much higher for blacks and Hispanics. Non-Hispanic white children comprised 57% of all poor rural children.


Poverty isn't a black problem. It's a problem that affects all races. If a candidate doesn't believe in the value of welfare (or wants to better regulate welfare to make it efficient), fine. Distilling it down to color is small-minded. And in this day and age, it makes Santorum look like an ape.

" The reason Social Security is in big trouble is we don't have enough workers to support the retirees. Well, a third of all the young people in America are not in America today because of abortion. " 2011


Aha. Senor Smartypants is right. Increase the number of "young people" in the current working pool by 33%, and you would increase the amount of Social Security tax gathered to support our retirees. Of course, the vast majority of abortions are obtained by women who would, without the procedure, become single mothers. And if we're really trusting Santorum's logic here, we have to remember that he thinks single-parent homes are "breeding grounds" for criminals. Criminals, last time I checked, don't usually generate more tax income than they take from the system while living in prison. Bummer, man. I thought he was onto something.


Mr. Santorum, if you're not going to do your research before talks like this one, double checking to make certain you don't insult another country before opening your big mouth, at least have one of your lackeys do it. Send someone to the source.

In 2010, the number of euthanasia cases reported to one of five special commissions was 3,136, according to their annual report. This was a 19 percent increase over 2009, but "this amounts to 2.3 percent of all 136,058 deaths in the Netherlands in 2010," said Carla Bundy , spokeswoman for the Dutch embassy in Washington.


Yes, how dare the man in charge of America's future desire the highest standards of education for the country's youth? Thank you for making it clear that this is not something we need to worry about coming from you.

Whew. Does anyone else feel a little overwhelmed by the hot air? Let me be clear. After a Presidential election is over, I never reveal my vote . And I will never disavow my President once he is elected. But Santorum isn't President yet. And until then, I will do everything I can to keep it from happening. Republicans, if you are asking yourselves why you shouldn't vote for Rick Santorum... I hope this helps.