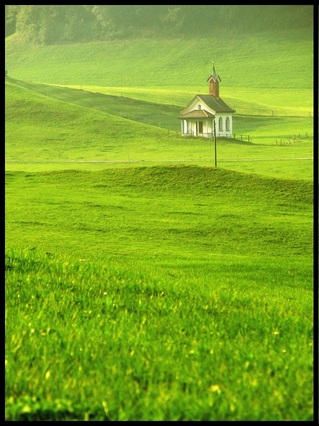 I knew I would never see a woman in the pulpit of the church where I grew up. Knowing this didn't drive me out of that church for good, though it potentially should have. My failure to react definitively to that point did make me feel like a hypocrite for many years. How could I fault Mormons or Muslims or people of any other patriarchal faith and not admit the similar shortcomings of my own cult: non-denominational Christians?

How can you say to your brother, 'Let me take the speck out of your eye,' when all the time there is a plank in your own eye? (Matthew 7:4)

Yet I kept attending occasional sermons, occasional Bible studies, and occasional Sunday school classes. I acted in our church theatrical productions and read verses aloud in front of the Sunday morning crowd. Why? When I was sometimes so vocally against what our church taught, supported, and forbade, and when other young men and women hoisted their principles and walked out the door, why did I stay?

Blogger Rachel Held Evans tackled the opposite question today in her post 15 Reasons I Left Church . Among my favorites:

5. I left the church because I believe the earth is 4.5 billion years old and that humans share a common ancestor with apes, which I was told was incompatible with my faith.

8. I left the church because it was often assumed that everyone in the congregation voted for Republicans.

9. I left the church because I felt like I was the only one troubled by stories of violence and misogyny and genocide found in the Bible, and I was tired of people telling me not to worry about it because "God's ways are higher than our ways."


I'm right there with Rachel on all of these issues, and I respect her right and her decision to leave an institution which made her feel this way. Yet, I know I'll be in the pews of the American Lutheran Congregation here in Oslo on Easter Sunday, and I'll be sharing a hymnal with my salvationally-skeptical husband. Why?
6 Reasons I Continue to Desire Church

1. I've known since I was a little girl that something bigger than nothing had a hold on our world. Even though I wasn't raised in the church, I knew. I still know. Even in my darkest, questioning moments, I can't shake that knowledge. No evidence at all, of course, which is why I stopped trying to convince anyone of God's existence several years ago. But I know. It's why, even when I doubt, I still lift my face to the night sky like a fool and say, Are you there?

2. Fellowship. It's a word Christians use often, and it's supposed to connote the deep, interpersonal communication we're called to in scripture. When done right, fellowship provides accountability, something all of us sinners need, as well as encouragement and support.

3. My people. When I walk into the physical church building in Livermore where I developed as a Christian during high school and college, my people welcome me. I am precious to them. Even with my questions (thankfully not considered "liabilities," but rather as opportunities to teach truth), my people want me there. They know me within a personal context that no other group on earth will ever understand.

4. The rest of my people. When I walk into most Christian churches, I have an assumed bond with the men and women there. Even without context, they still know me as a sister. That's a beautiful security to have when one is prone to wander.

5. A reminder. Even as my faith has adapted over time, and even as my viewpoint on social and political issues has become more liberal, I appreciate that attending church reminds me of my inherent value in the eyes of God. I appreciate the reminder, too, that to give of myself to the world is something divine.

6. Prayer. The stickiest belief I have. The most muddled. The most changed. But prayer is a part of every church service I attend, and if I haven't stopped long enough in my daily life to be grateful or to consider the state of the world or to ask for help, in church, I may be swept up in the group prayer. And whether or not God operates in the world today, whether or not he "responds" to prayer, I know prayer calms my heart and soothes my mind.


Faith is believing in something when common sense tells you not to. That's why I don't fault anyone who doesn't believe in God. They're obviously paying attention to their own common sense, and that's a valuable survival skill to have.

I will always grapple with the questions of church patriarchy, Old Testament violence, discrepancies in the New Testament text, clichéd (and sometimes inexcusable) behavior on the part of my fellow Christians. But I doubt very much that I will ever walk completely away from church. Like Rachel Held Evens, who continues to search for "a faith community" in which she feels she belongs, I can't give up the ghost, not even at the urging of common sense.