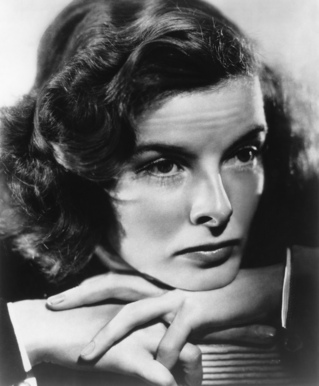 People remember Katharine Hepburn as a feminist icon, but it's worth noting how many of her films could actually be construed as anti-Feminist fables, stories that show how far a prideful, powerful woman can and should fall.
My favorite of these is The Philadelphia Story (1940), a film following the final days before a socialite's second wedding. The drama surrounds the way Tracy Lord (Hepburn) is forced to reassess her own priorities and attitudes when her ex-husband, C.K. Dexter Haven ( Cary Grant ), returns as a wedding guest. It is when Haven reproaches his ex-wife by saying, "You'll never be a first class human being or a first class woman until you learn to have some regard for human frailty," that Tracy Lord begins to see the error of her "priggish" ways.

Other examples of her less-than-Feminist films, at least as we look at them today, include Adam's Rib (1949), Woman of the Year (1942), and Pat and Mike (1952). All of these are good movies, and in all of them the moral is the same: a woman might be able to strive for equality, even superiority, but in the end she must submit to the viewpoints and values of her man.

Over the course of her career, Hepburn would be nominated for 12 Academy Awards (a record only recently broken by Meryl Streep), and she remains to be the only woman to win the category four times: Morning Glory (1933), Guess Who's Coming to Dinner (1967), The Lion in Winter (1968), and On Golden Pond (1981). Movie-goers everywhere loved her.

Today, we take that fact for granted, but we shouldn't. The adoration of the American public was hers in spite of a personal reputation completely out-of-step with the time.

Hepburn lived life according to her own dogmatic terms. She spoke out against censorship when Hollywood's infamous blacklisting began, and her name was mentioned in multiple hearings by the House Un-American Activities Committee. She was a proponent of birth control and abortion long before either had been federally legalized. She was an atheist when the vast majority of Americans believed in a Christian God. And then there was her relationship with Spencer Tracy .

Her greatest on-screen love was also the love of her life. Their relationship spanned nearly three decades (and nine films), and all the time Tracy was married to someone else.

He and his wife had separated several years before he met Hepburn, but his Catholic traditions prevented him from seeking a divorce. Hepburn and Tracy maintained separate residences, yet were together as much as possible; she didn't move in with him until he fell ill in the early 1960s. Friends say Hepburn's entire demeanor changed when she was around Tracy. She loved him "blindingly," according to Lauren Bacall. The last film they made together, Guess Who's Coming to Dinner , earned Hepburn an Oscar for Best Actress and Tracy a posthumous nomination for Best Actor. Hepburn was with Tracy the night he died of a heart attack in October of 1967. She never watched Guess Who's Coming to Dinner because it was his last film.

In spite of it all, the public continued to love Katharine Hepburn. They loved her angular beauty, her statuesque silhouette in high-waisted trousers. And, as film historian Richard Schickel explains, "Her best films were when she was presented as a woman on her high horse with slightly pretentious, often comically stated ideas about the world. It was for men to bring her down and get her to reveal herself as quite a good gal, sporty and democratic. We liked the idea that aristocratic people would be humanized by democratic values--in her case, by slightly rough-necked and good-natured males."

This last, I believe, is not only true, but is evidence of Katharine Hepburn's own, intentional crafting of her movie image.
Yes, she rocked slacks, loafers, and buttoned dress shirts. She was athletic, broad shouldered, and slim in an era when ideal beauty erred on the voluptuous side. But appearances aren't everything. In fact, her confidence and clipped Bryn Mawr accent contributed to a major downfall early in her career.

She'd been cast in a typical 1930s screwball comedy called Bringing Up Baby (1938). Today, this is one of the best known classics of all time, but at the outset, the film was a major flop. And everyone, including Hepburn, believed the failure to be her fault. In Hollywood, she was labeled "Box Office Poison."

And I agree. She was the reason her films weren't drawing a fan-base. But my theory is that audiences simply weren't buying Hepburn as the archetype she was asked to play: a man-obsessed, manipulative, airheaded rich-girl. When she tried, moviegoers could feel how disingenuous the performance was.

Hepburn was already a budding business woman. She was savvy enough to include a clause in her first RKO contract requiring her approval on any script she was presented. But she had no control over which scripts the studio chose to offer her. Just wanting a role didn't guarantee her a part. Along with dozens of other A-list actresses, Hepburn auditioned for the part of Scarlett O'Hara in the color blockbuster and instant classic Gone With the Wind (1939), but was rejected by producer David O. Selznick because he felt she had no sex appeal.

Like many of her female co-stars, Hepburn knew what it meant to be a woman in Hollywood. Playing the game equated to being chained to a single studio and susceptible to that studio's every whim. It meant taking on any boilerplate role showcasing a swooning, bird-brained female which the studio handed to her.

Of the time, she said, "The independent theater owners were trying to get rid of Marlene Dietrich , Joan Crawford , and me." For Hepburn, the reality was clear. Either she was going to lose this game or she wouldn't play.

This is where Hepburn's Feminist, game-changing sensibilities kicked in.

First, she used her own money to buy out her own studio contract ($75,000). No longer tied down to RKO, Hepburn contacted Columbia Pictures and joined the cast of Holiday (1938), a darker, high-toned comedy with Cary Grant. I love this film today, but although it was critically acclaimed, a low audience turn-out dampened her prospects as a free agent.

Rather than taking on films for less pay than she was worth, Hepburn moved from Hollywood to Broadway, and took the starring role in The Philadelphia Story , a play written by Philip Barry and tailored exactly for her. And in the shrewdest business move of her career, she partnered with Howard Hughes and purchased the film rights for the play before it opened. When the play was a smash hit, Hollywood studios were vying for production rights, and Hepburn was standing at the top, holding all the marbles.

As a foil to her edgy, progressive lifestyle and political views, Hepburn was savvy enough to understand that box office success was synonymous with catering to the presiding world view, and in a final, clever PR move before the picture was released, Hepburn said, "I don't want to make a grand entrance in this picture. Moviegoers ... think I'm too la-di-da or something. A lot of people want to see me fall flat on my face."

The opening sequence of The Philadelphia Story shows Cary Grant pushing his irritating ex-wife to the floor. And so, Time magazine declared, "Welcome back, Katie, all is forgiven."

But Hepburn wasn't a sell-out, either. She had enough self-respect to choose projects that furthered the cause of women's rights at the time, while remaining witty and traditional enough to steer clear of conservative Hollywood censors. And her plot to succeed, while never abandoning her quest for personal happiness, began with some common sense, some business sense, and a resounding self-esteem.

And that, to me, is the best possible definition of the Feminist ideal.