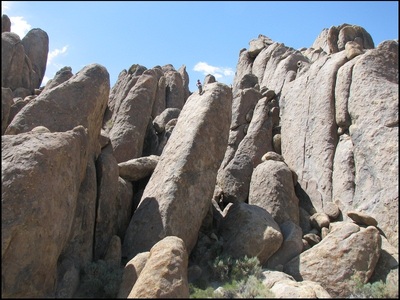 After a year's sabbatical, Jonathan and I are back on the wall. It feels good and, to keep our spirits high, I thought I'd do some retrospective chronicling of our past climbs together. LEFT: Me, topped out on Deep Dish on The Leaning Tower of Pizza.

Climbing. It's a sport we picked up together shortly after we'd begun dating in 2003. (As an aside of sorts, I highly recommend that couples just starting out take a stab at indoor climbing. Climbing requires trust, respect, sensitivity, and constant verbal communication. There is no better way to bond with one another.) For the first few years, we stuck to the plastic. Our membership at Diablo Rock Gym in Concord, California was a necessary expenditure every month. Eventually, following the organic progression of climbing, we moved outdoors. In California, that meant easy access to all types of rock almost year-round.

In May of 2009, we took a road trip down the Eastern Sierra, from the east entrance of Yosemite National Park to Joshua Tree National Park, with a pit stop of a few days in and around Bishop.

From our campsite near Big Pine, we drove an hour south to visit the famous Alabama Hills Recreation Area , backdrop for classic TV westerns (The Gene Autry Show and The Lone ranger) and blockbuster films (Iron Man and Transformers). Our car kicked up a dramatic cloud of dust as we rolled along Movie Flat Road; we clenched our jaws tight as we rattled over the washboard.

Objective: Leaning Tower of Pizza
Style: Sport Climbing
Level: Easy/Beginner
Approach: Drive up and park.
On the outskirts of Whitney Portal, the Leaning Tower of Pizza sits side by side with Elephant Rock in an area of the Alabama Hills called The Ghosts. Like all the heavy, round, reddish boulders in the Alabama Hills, Pizza is dramatic. It tilts to the right like everything else around it, but somehow manages to stand out. 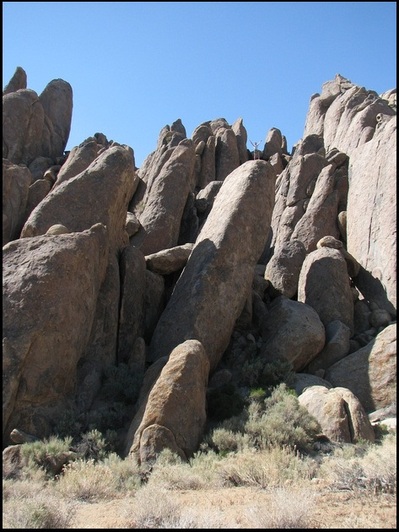 ABOVE: Jonathan on top of the world.

As this was our first long all-climbing trip, we stuck to the easy routes. Deep Dish (5.6) and Panzarotti (5.7), both on the leaning side of Pizza. 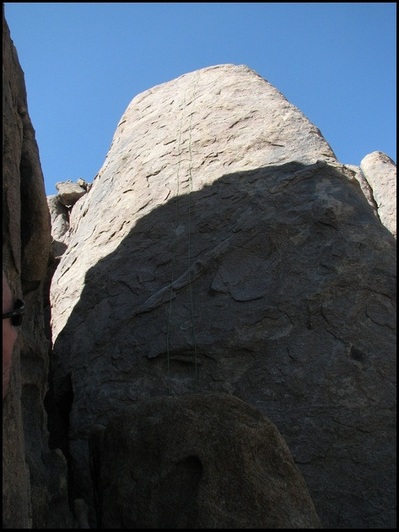 ABOVE: Jonathan led and built the anchor. I climbed both routes top-roped.

The rock itself is 90 million year old granite, standing on end and weathered into potato-shaped boulders due to spheroidal weathering . It's gritty and pocked, but there are very few true, obvious holds. As with most standard slab climbing, in order to complete these routes, you'll need to trust your feet and love the friction. 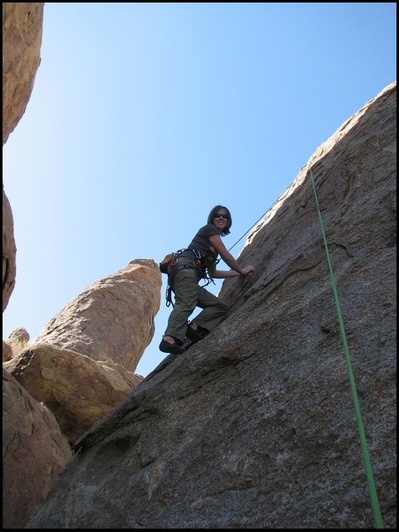 ABOVE: See the smile? I'm trusting my feet and loving the friction. So long as the camera is trained on me, I'm fearless.

In the late spring and early summer, it's best to climb early in the day, before the sun rises high enough to bake the rock. Once hot, the slab will cook your shredded fingertips and make your chest and belly sweat. Bring more than enough water. This is desolate country. And if you pack your lunch, there are lots of cool, shaded places behind the rocks to picnic.

Finally, may I just say that, your jaw may drop as you drive through the Alabama Hills, but you'll never believe how utterly alien and spectacular the panorama is from the summit of Pizza. An expanse of dusty graveyard, endless acres of neglected, red tombstones, and all under a cornflower sky. Anchor in, stand up, and have your mind blown. 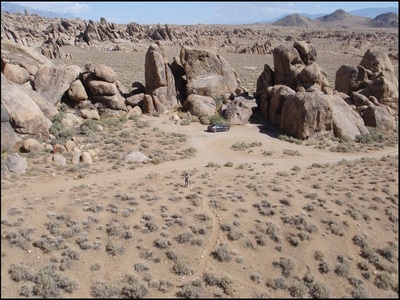 ABOVE: View from the top. That's me in the middle, blending into the sci-fi scenery wearing my Back to the Future shirt. And that's our car behind me. Gotta love these easy approaches!

Some people spend weeks at a time climbing in the Alabama Hills and the neighboring Buttermilks. One day was not enough to appreciate the potential of those parks. Someday, when we're California residents once again, we'll return for an encore.

More like this: Climb On: Trip Reports for beginning rock climbers

For more (and larger!) photos from this climbing trip, visit our gallery: Owens River Gorge and Joshua Tree

More detailed information on this climbing area can be found at SummitPost.org .