The following is a cross-post from my second blog ( Feeding the Trolls ). I feel strongly about this issue, and I hope that, upon reading my remarks, you will, too. 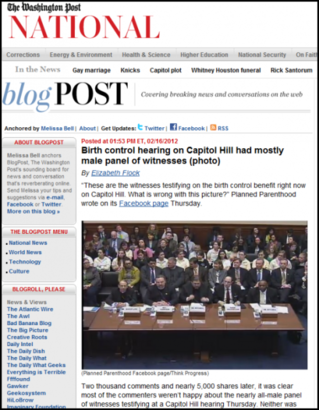 The United States of America, my home country, is stepping into a new era regarding the availability of health care. Because health care is such an enormous issue, people are bound to have trouble with individual provisions within the larger bills and debates. One of those provisions has to do with Birth Control. I capitalize Birth Control because it is, in my mind, after certain vaccines and quality-of-life-enhancing medications, THE most important health care advancement in history. But even in the U.S., where women are liberated to the point of achieving the majority of advanced degrees offered each year, there is something scary looming large around the availability of contraception: Religion.

Now, I understand that there are countries where women are still considered property, and in those places I wouldn't be at all surprised to see religious leaders refusing to allow contraception to their chattels. But when the Legislative Branch of the United States' government convenes a panel of male religious leaders to weigh in on the availability of Birth Control to American women, I am blown away. And pissed off.

So, I thought I'd write a letter to the eight male witnesses (dominating two panels of ten total witnesses ) called by last Thursday:

You don't want your government telling you that you must subsidize the availability of contraception to the female members of your congregations, female employees, and the female students studying in your halls of learning. I get it. Nobody wants to be bossed around. Nobody wants his rights trampled by Big Brother.

Which is ironic, because I don't want my Big Brother to have any say at all over my underwear drawer, my medicine cabinet, or my uterus.

I would like each member of this panel to stop for a moment and consider what readily available, affordable Birth Control would mean for society. Imagine if you, sir, were able to have sex without dreading that you would become pregnant. Oh wait. You already understand that freedom. It was gifted to you at birth, sort of a two-for-one deal that came with your penis.

What is it, precisely, that concerns you about this law? Are you worried about the sweet, chaste, thirty-one-year-old blonde who answers the phone in your front office. ("Hi. Thank you for calling First Baptist of Chattanooga. This is Marley. Oh, certainly. Would you like to speak to Pastor Bob or Pastor Pete? *giggle* You're welcome. You have a lovely day.") Right now you don't know what her bedroom habits are. You hope she goes home, puts on Looney Tunes sweats and watches TV. But what if this law passes and sweet, virginal Marley runs straight to her local Walgreens to fill a prescription for The Pill? What if your institution has to pay for the insurance that covers it?

Talk about the end times.

But the answer is easy. Get your long, male noses out of Marley's business. In 1965, the Supreme Court ruled in the case of Griswold v. Connecticut that a Connecticut law prohibiting the use of contraceptives violated the "right to marital privacy". And in 1972, the case Eisenstadt v. Baird expanded the right to possess and use contraceptives to unmarried couples. It's on the books. The "activist judges" you fear on the Supreme Court pushed through an agenda which finally separated sex and state.

As I mentioned before, there are more and more highly educated women in America who could speak intelligently (vehemently) on this issue. There are probably many who would speak on your side, as well as mine. But you didn't ask them, did you? Because you're still using the Bible as a way to measure the value of women in daily life. And because asking a religious woman to tell you the truth about her opinions on contraception is scary and shameful. She might actually use the phrase "gird my loins" outside of any Biblical context. And then where would you be?

I wonder what would happen if we turned this issue over to women only. You know? What if we said, Ladies, you get to choose whether you have access to dependable, affordable Birth Control. Check Yes or No.

Not only do I think I could call that outcome, but I think this is the deepest fear of religious men everywhere: that they too can and will be silenced. After millennia of the opposite case, men might be forced to sit back and shut up.

Exactly 100 years ago, the Parliamentary Franchise Bill was set before the British Parliament for the third time. This bill would have enfranchised British women (30 and older, and meeting certain other qualifications), but was defeated once again. Why? Let's ask one of the voters... Viscount Helmsley:

"It seems to me that this House should remember that if the vote is given to women those who will take the greatest part in politics will not be the quiet, retiring, constitutional women... but those very militant women who have brought so much disgrace and discredit upon their sex... I believe that the normal man and the normal woman both have the instinct that man should be the governing one of the two, and I think that the undoubted dislike that women have for men who are effeminate and which men have for masculine women is nothing more or less than the expression of this instinct..."

(Side note: I would love to arm wrestle this guy. Of course I'd win. Because he's dead.)

What would the good Viscount Helmsley think of the American government today: 73 women in the House of Representatives and 17 women in the Senate. Disgusting. A bastardization of what the Lord our God set forth as the rule of law. Sick sick sick. I'm as certain of this as I am that he would have nodded sagely along with the men of the cloth who sat before our Congress last Thursday. If a woman wants a say about this issue, let her petition her clergyman. Let her discuss it with her husband over the dinner she cooks for him and sets lovingly on his table at 5 o'clock sharp.

I'm also sure he'd find Congresswoman Nancy Pelosi to be an abomination. I don't. And on Thursday, she looked at the panel of men garbed in black and pounding their fists on the table in front of her, and she said :

Where are the women? The Republican leadership of this Congress thinks it's appropriate to have a hearing on women's health and purposely exclude women from the panel. I may at some point be moved to explain biology to my colleagues.

Now there's the kind of voice I want speaking for my right to do exactly what I've done. I've been married for 7 and a half years and, thanks to The Pill, my husband and I have developed a closely entwined, affectionate, passionate, loving relationship that only enhances our freedom to move, explore, and grow. That was my choice. I want every American woman, regardless of her current economic standing, to be able to say precisely the same thing. That was my choice. Not my husband's or my father's or my brother's or my uncle's or my pastor's or my priest's choice. But mine.

Get out of my underwear drawer, boys. And stay out.