Choosing not to write tonight would be too easy.

I could snap my laptop shut, flip my alarm clock on, swallow a pill, and turn out the lights. I could listen to the cars humming on Massachusetts Avenue nearby (or "Mass Ave" as the locals call it) and wonder about the shadows of strangers in dorm rooms across the street. Then I could feel a strange desire to watch Jimmy Stewart in Rear Window and spin my blinds shut. I could wince as a police car siren sounds on the street below, grimace as the wail swivels and vibrates against my eardrums, but choose to keep the windows open anyway on my first cool summer's eve in Cambridge.

But choosing not to write would also be an alarming waste of the knowledge I've amassed today. My first day of seminars turned out to be a grueling twelve hours long. True, the seminars and lectures were interspersed with two meals in the cafeteria and another public reading, but those aren't true breaks. No, here at the Lesley MFA residency, one never stops learning.

In the morning, our incoming Non-Fiction class learned about workshopping. We discussed the elements of a positive and productive critique, how to find a balance of candor and tact in everything we communicated to our classmates. It isn't easy. I'm far more candid than tactful, but I do strive to be as helpful as possible.

Still, an author's writing can become like her child, her helpless, squirming infant. While that infant may only know how to bawl and suckle and gurgle, in the author's eyes, the baby can do no wrong. If a well-intentioned critic opens by telling the author that her baby has all the career potential of a rodeo clown, the author will certainly disregard everything else you say. (She might even slap you, so step back!)

All that is to say, I came away with some useful ideas about critique which I will use this week and which I hope to see used when my classmates get the chance to dissect me on the table.
Next, all first-year Non-Fiction folks gathered in another room with author and instructor Alex Johnson , a professor at Wellesley and Harvard, for a seminar on Memory and Imagination: Re-seeing a Life. We discussed the nuances of memoir, the importance of memory and how memory can be enhanced and universalized by imagination.

Ms. Johnson urged us to seek out and study our favorite memoirists in order to gather tools for our own work, and in her urging she offered this quote by Oscar Wilde: Talent borrows; genius steals. Now, I suppose the implication is that a true genius can take someone else's good idea, someone else's pristine tool, and use it better, reinvent it so that it can be his or her own. Either way, it's a grand quote.

Over lunch I learned about two massive East Coast blizzards, one this past winter and one in the 1970s. One of the Poets propped her sandaled feet up on the metal table, her long, dark calves shining in the sunlight, and described the way the Blackberry-addicted grown-ups in "Poli-wood" were launched back to their respective childhoods by the most recent storm in D.C.

"People pulled out laundry baskets, boogie boards, anything that could slide, and they sledded down hills together," she said. "Grown men hunkered down in snowbanks butt-first, like they were at the beach, and stuck their six-packs in the snow beside them."

We laughed with her, and she continued, "For a few days, people actually looked other people in the face when they passed on the street." This, we all agreed, was something remarkable, but it's remarkableness was simultaneously regrettable.

Before we knew it, the time came to run back inside for more classes. I spent two hours in a room with A.J. Verdell , a former professor at Princeton. There were twenty other prose students with me, too, but you'd never have guessed it, not with my nerves. Ms. Verdell sauntered in a few minutes after our appointed time and launched into a lecture on the importance of crafting scenes in all prose that left me staggering.

I'd read her required material (a short, personal treatise on the topic at hand which exactly matched the outline of the lesson she taught), but her voice and her habit of circling the room, of tangential thought, of putting people on the spot, of piling on information until we couldn't possibly absorb one more fact... all of it left us reeling.

"I give a lot of information every time," she told us, switching her weight from one foot to the other, the hemline of her heavy denim dress and tips of her graying braids swinging in opposite time to her rhythm. "You'll never get all of it. But I believe that you will keep what you are prepared to take right now. If you don't remember it, you don't need it yet. You'll take what you can use, and that's just fine."

She also said, "When I taught at Princeton, I used to put people out of my class for yawning."

Dead serious. All the time. And I took pages of notes, the good kind that lead one into another so that reading through them later on won't take detective work.

Ms. Verdell asked us to pull out the scene we'd been asked to bring with us to the class, something we'd written for another assignment or a larger story, and hand it to our right hand neighbor. Feeling every bit the prepared, perfect student, I slid my few pages from the folder in my binder and handed them to the guy next to me.

Seconds later, Ms. Verdell loomed up behind my neighbor and snatched my scene from its unassuming spot on the desk. "What is this?!" she half asked, half cried out in horror, and held it up for my classmates to see. "Why isn't this formatted and double spaced?!"

I'd printed my scene in the computer lab during a brief break in my previous seminar. It wasn't formatted in my Google document, and I didn't have time to play with the spaces and the margins, the font and text size. As my classmates looked on with morbid fascination or tried valiantly to look away, I prayed for mercy.

"Do you know what a publisher would do with this?" Her voice had turned so menacing that I shuddered to think. "A publisher would throw this away. Gone. Done. Never even looked at it."

She slapped the scene back down in front of my neighbor (who jumped, visibly).

"People, you must format. If you can't take the time to do that, you're in the wrong business."

Don't worry, I didn't quit school and run off to join the circus. I'm still in Cambridge and I survived the rest of the day. This was partially due to the fact that I am 27 and not 17; at 17, such an episode might have damaged my sensitive, fledgling psyche irreparably. But it's also because the rest of that seminar was so positive.

We circled our verbs, and almost all of mine were very good, necessary, fruitful verbs that furthered the story and perpetuated action. We identified the number of characters in the single scene, and my work happily included only two characters (Ms. Verdell came down hard on anyone attempted to wrangle crowds in their few pages). We listed objects found in the scene and, if they weren't already there, listed objects that could and should be in the scene. Mine had plenty of tangible, visible objects to be manipulated by and supportive of my characters and their actions.

Tonight, if I were to sit down and take a scalpel to that bloody, unformatted scene, I bet I could pare it down to only three pages instead of four and a half. And those three pages would be an imaginative and integral scene. And, naturally, I would take the time to format it, so really it would be six pages. I was prepared to learn all of that, so I kept it. Thank God.

I learned other things today, too, but my mind is creaking and begging for rest. In less than 12 hours, I'll need to be up and doing all of this again, this time with workshops involved and the critiquing of my classmates' work. (I'm not on the chopping block until Monday.) 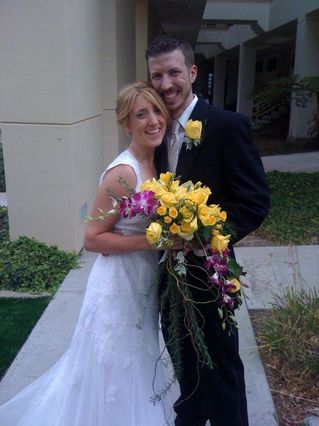 So, I will end on this note instead. My brother-in-law, Joshua Camp, married his true love, Jolene Adams, today in San Diego. Jonathan was the best man, and he sent bunches of pictures to me via his iPhone (even snapping a hip shot of the bride coming down the aisle!). I am so excited to have another sister, and Jo is a wonderful, talented, genuinely generous young woman. I have no doubt that they will take good care of one another, will learn how to magnify the pleasures and adventures in life together, and will enjoy making the most of their marriage.

Congratulations, Josh & Jo! I love you both, and my heart was with you today on that cliffside alter.