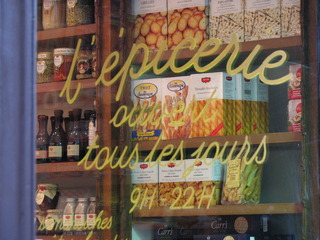 Around me swirls an exotic tango of French dialogue and cigarette smoke. We approached the Café Limo on this, our final night in Paris, tentatively. We had been worried that our whim, a quick stroll for a night cap and a chance to soak up our last hours in the city, would be thwarted by lowered curtains, stacked chairs, and a sign reading Fermé.

But coming around the corner into the Place Gustave, we were shocked to see that every café on the square was ablaze with lights and abuzz with the happy, animated conversations of Parisian night owls.

This is where we sat on our first night in Paris, a Saturday, after 13 hours of plane and train travel. Our hotel, the Hotel France Albion, is just down the street. We went in search of a late dinner that evening. What we found was true Paris hospitality. Our waitress came and sat at my elbow, offering translation of their French-only menu.

Thankfully, my choice to enroll in college French classes for the last couple of semesters has prepared me for food ordering, at the very least. I've used my "skills" at every food-related turn. It's been fun! And it's led to a couple of amusing mix-ups.

For example, on Sunday morning, we visited the Eiffel Tower. We had not expected the heat to be so intense in the shadow of the grand monument, but considering the thousands of people gathered there, cote a cote, as it were, Jon and I were soon very thirsty. Before we began our climb, we decided water would be necessary. I located a cart selling bottles of water, gelato, miniature French flags, post cards, and teeny Eiffel Tower replica key chains.

"Bonjour!" I said, greeting the proprietress of the little concessions trailer. She was a drooping middle-aged woman with dyed hair and a James Dean tank top.

"Bonjour," she replied with a lot less enthusiasm.

"Je voudrais un boite d'eau, s'il vous plait." I was all smiles, and suddenly, so was she.

Echoing her au revoir, I grasped the perspiring bottle of water and turned to go, grateful it was not the "box of water" I'd actually requested.

Not all of my mistakes have been so innocuous, unfortunately. In Versailles on Tuesday, Jonathan and chose a creperie for lunch. We had crepes in Brussels a couple of years ago and enjoyed them very much, and it's definitely not something we eat in the U.S. Going over the French menu, I translated for Jon as needed and we made our selections. The waitress came for our order.

"Pour lui," I began, gesturing to Jonathan, "Un galette jambon au pays." I had guessed that jambon au pays referred to something akin to Canadian bacon, as its direct translation is something like ham of the country or country ham.

Galettes are like crepes, but without the sweetness, and so they are prepared very fast. We dug right in. As it turned out, I'd been right about the Canadian bacon. Jon was happily shoveling his galette into his mouth. I, on the other hand, was not so fortunate. While I'd been preoccupied with making sure my dear husband wouldn't be blindsided with some gross surprise on his plate after a translation error, I had become cocky about my own meal choice.

The description of my galette had included poulet, fromage, champignions, et dijionaise. My mouth watered it arrived before me. I couldn't wait to taste the mingling of chicken, melted cheese, onions, and dijionaise sauce.

But champignions are not onions. No, the word for onion is ognion. This correction snapped to mind as I took the first forkful of gooey, melted galette and chomped into something dark, bitter and chewy.

Champignions are mushrooms. And I don't like mushrooms. No, let me be more precise. If there is anything I hate, loathe, despise, and abominate, it's a mushroom.

With as much dignity and grace as I could muster, I masticated the mushroomy mess in my mouth until it was easy to swallow, closed my eyes with relief, wiped sweat from my brow, and chugged the rest of my Orangina to remove the nasty aftertaste completely. The trouble was, I was still starving. So, I resolved to eat around the mushrooms, opting for the chicken and cheese and galette.

I sliced open the side of my galette and what I saw will forever be synonymous in my mind with that scene in the movie Jaws... The police chief and the scientist are squatting before the massive dead body of a shark they hope is the one which ate both a drunk college girl and a little boy in recent days. But because they must be absolutely certain this is THE shark before re-opening the beaches for the holiday weekend, they must examine the contents of the stomach. So, they slit the belly of the best, and the "contents" come spilling out.

Director Steven Spielberg was kind enough to do the gutting away from the camera, but I found the whole scene so obscenely grotesque that they might as well have performed the operation on my kitchen table during dinner. I remember three things from the slippery glut of junk which oozed from the stomach of that shark... a license plate, a car bumper, and the thick, milky white pool of liquid which spread across the floor of the warehouse like a plague.

No dead bodies, but that was no relief, and I was nauseated.

Such was the case with the opening of my galette, as well. The melted cheese and white dijonnaise sauce fanned out across my plate, carrying with it a wave of dark, rubbery disks... the champignons. Too many to avoid.

When Jon had finished his lunch, I called the waitress over to order dessert. That, at least, would quench my appetite for the time being. "Je voudrais un crêpe sucre avec un boule de glace chocolat, s'il vous plait."

Our waitress noted my lunch plate and asked me if there was something wrong with the meal.

I appreciated the offer to bring me a replacement lunch without mushrooms, but didn't want to trouble anyone. Within moments, I had my dessert plate before me. A sweet crepe with the richest chocolate ice cream I'd ever tasted!

As you can tell, the Parisian people have been very gracious about my errors. Many people here speak English, too, but the majority are happy to speak slow, enunciated French with me. Their patience has been much appreciated.

Across the street from our hotel is the Le Grain de Café. It's like something straight out of every French textbook I've ever owned. We had our petite-dejeuner (breakfast) there each morning. Breakfast consisted of un boisson chaud (a hot beverage), jus du fruits (fruit juice), and un croissant ou du pain et buerre (choice of a croissant or bread and butter).

The older lady who ran the café decided quickly that Jon and I were absolutely adorable. The feeling was definitely mutual. She was short and slender, rosy cheeked and bright eyed. Her white hair was pulled back in a loose chignon and she wore large, delicately-rimmed glasses. However, it is her voice which we will most remember, high and soprano sweet, musical. As she took our order on that first morning, she chose words she knew I would understand, enunciating between them.

The hardest part about being on the receiving end of a conversation with a native French speaker is the blinding speed at which they communicate. French is a melodic language, and I love the words individually, but when a Parisian speaks... the words run together in a torrent of sing-song vowels, and it's extremely difficult to distinguish between nouns and verbs. But our lady of the café knew that, and did her best to make the exchange a pleasant one for us both.

For example. We ordered our breakfast and made our drink options.

She nodded energetically and gave me another expectant look. When I came up with no response she urged me. "Et les jus du fruits... vous voulez orange ou ahreekoh?"

Now, orange I knew. But the second choice? Ummmmm... no idea.

Sensing my confusion, she leaning in a little closer, smiling all the while, and gave it to me again, nice and smooth.

"Oh!" I cried, sitting up a little straighter. Pleased. "Abricot!"

Our lady of the café nodded and crossed her arms, waiting again. I turned to Jon. "Would you like orange juice or apricot juice?"

Because he's a rebel, Jon chose apricot. I chose orange. When the juices arrived, the lady held up each of the two bottles in turn.

"Orange," she said, loud and high, letting her voice reach its peak at the midpoint of the word and then stressing the soft "g" at the end in that very French way. Then she lifted the next bottle. "Abricot!" With each syllable, she slapped her open palm against the flat underside of the glass bottle, both for emphasis and to dislodge the apricot pulp from where it rested at the bottom.

But even as she bellowed the names of the fruit at us as though we were children at the low end of the learning curve, she was smiling. It's a good thing we're cute.

After that, she had our breakfast order memorized, and her welcome was always warm.
True to form, the people of Paris all seemed sensitive to our needs at tourists. They were patient with me as I stumbled through sentences... ordering food, navigating the city, asking questions about advanced ticketing systems, etc. Now, we're leaving Paris for the Provence region of France. Our first stop is Marseille, but that's sure to be abbreviated as we look onward toward the rest of our journey. Here's hoping the rest of France is as understanding of my broken attempts at using their language as they were in Paris. Knowing I was forgiven before I began made speaking it such a joy.