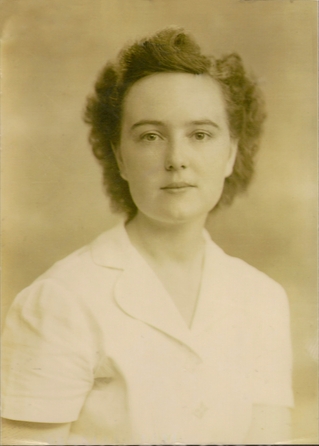 When the boys and I were growing up, Thanksgiving Week meant many things to us. Grass stains on the already stressed knees of our jeans, the anticipation of succulent turkey, hours of football with our dad (it may have been called "touch" football, but there was quite a lot of tackling going on, anyway), and long, deliriously beautiful days without school. But most of all, and best of all, Thanksgiving meant Grandma.

She lived in Illinois, two thousand miles from our little home in Newark, California. But, being a good grandmother, she wanted to give the California grandchildren some regular face time, and so she flew in the weekend before the holiday and flew home the weekend after, every year.

It was our week. While Mom worked and Dad slept (he was working the graveyard shift at a local correctional facility), Ted, Curtis and I got Grandma. We played games, went for walks, listened to her stories. She crocheted dresses for my Barbies and read aloud to the boys.

Then, on Thanksgiving Thursday itself, we'd all trundle out to the field for our big football game. Grandma came, too. She wore sweats and sneakers, had her game face on, but she wasn't a fullback by any definition. Delicate and soft at all her corners, Grandma may have been a great sport, but she was no athlete by the time we knew her. Dad would toss the ball to her, gently, and then charge at her, wrapping her in a giant hug, declaring her tackled.

When she was young, Grandma had been sporty in her own right. She won medals for archery. I remember pondering a picture of young Dot in saddle shoes, her arm cocked back, prying the string from the bow. Her eyes were narrowed. Her left arm aimed the feathered arrow, absolutely straight. Her short, brunette curls hung in the breeze as she tilted her head for a better view of the bullseye. In that picture, long before she was a wife, a mother, a grandmother... young Dorothy Bercher was Artemis, fearsome, bright and capable.

Grandma's details are what really stick with me now. She liked colorful beads, gemstones. She kept her silky, graying hair curled and short. When it rained, she wore a little, clear plastic cap to protect her curls. We called her Grandma Dot, short for Dorothy, and until now it had never occurred to me how darling the name Dot was. It fit my precious, soft-spoken grandmother to a perfectly crossed tee.

In the study of the home where she lived in Oak Brook, Illinois for much of her later life, after my grandfather had passed away and my dad and his siblings had moved out and onward, there was a desk. It was a grand piece of furniture. I distinctly remember standing on my stockinged tip-toes to see over the edge when I was about five years old. There, scattered across the glossy surface, were the remnants of an era gone-by... one in which people communicated with one another by mail. Grandma enjoyed keeping up correspondence with her friends and colleagues, and so she had stationary, pens, pencils, a magnifying glass, stamps (the lickable kind!), tape, and a blotter always at the ready.

At the perimeter of the desk were piles of letters, bills, and other incoming documents to be dealt with at her next sitting. Then, at the epicenter of the bits and pieces of all this communication, was grandma's typewriter. It rose from the tangle of papers like a majestic volcano, stark, powerful, rumbling with electricity.

I loved to play with it. Grandma taught me to load it with paper, to set my margins, to be aware of the length of the page so that I wouldn't run out of space. When I was alone in that room, sitting in that chair, my feet swinging back and forth in the air above the floor, I was Hildy Johnson, girl reporter. I churned out stories, letting my fingers skip and tap across the keys, my own zeal getting the better of me with every sentence.

The sentences were complete gibberish, of course, as I couldn't truly type at that time. And grandma's stories of her years as an expert typist, something in which she took great pride, made me green with envy. Oh, how I yearned to finish off a scathing opinion piece for my favorite New York City newspaper with a drum roll of keys, a flourish... and have the last sentence not appear as: a;lsdk asdlkfja;ienc;a asldifjalmn a;sdligj aep[woipajkf' al;j a[poikk" [ap'oja;pfjafm 3'aadeoljfkoal!7.

I shudder to think of how much paper, how much ink, how much correction tape I wasted in that room. Grandma didn't mind at all, and I think she'd love to know that I have an antique typewriter in my studio, one which still kicks me in the Hildy Johnson gear, but on which I type real, logical sentences. Today, I'm quite the typist, and I think that would make her proud.

Beyond her ability with the typewriter, though, Grandma's penmanship was enviable. Every letter, every word was tightly coiled, measured, even. She used to mail me clippings of articles or comic strips or newsletters which she thought I'd find interesting, and she always included a little note. Receiving these trivial gifts made me feel oh so special. It meant we shared something, that she felt I was smart enough to appreciate the complex highway system of branches in our family tree... or the subtle humor of Marmaduke.

Years later, after I was grown and married, she still wrote to me occasionally. Her penmanship had faded, like the color in her cheeks and the vigor in her eyes, and would slant to the right, run off the page. By the time I received the last letter, I had to fight to distinguish the individual words, had to read them aloud to perceive meaning. Her train of thought jumped the track every so often, but the overall purpose was there... virtually reaching out to caress the face of her granddaughter, just a touch of fragile fingertips to youthful cheek, Even from this distance, I love you.

This week, my grandmother, Dorothy Ann Bercher Pancoast, passed away. She was eighty-five years old. In her last years, Grandma's brain had been ravaged by Alzheimer's. When I saw her in October of last year, she called me Mary. My aunt's name is Mary and, to be fair, we do look somewhat alike. So, I didn't argue. I received the moniker of Mary as my own, held Grandma's tiny, purpling hands in my own, and gazed at her. What a wonderful woman. What a matriarch. What an accomplished, well-rounded human being.

Jonathan and I will be traveling to Illinois for the wake and the funeral mass, and because I know my family, I'm certain that mourning will be coupled with celebration and humor. We will be missing Grandma for the rest of our lives, of course, but I know I will think of her often... especially when I'm at my typewriter or penning a letter on my own stationary. And every year, when the leaves on the trees have dried and died, and the wind sloughs them from the boughs to the ground, and the scent of damp grass spirals through the air like a perfectly thrown football... during the week of Thanksgiving... I will remember those hours we wiled away with Grandma Dot in the autumn sun.

Grandma's Obituary in the Chicago Tribune

Other entries about my grandparents: