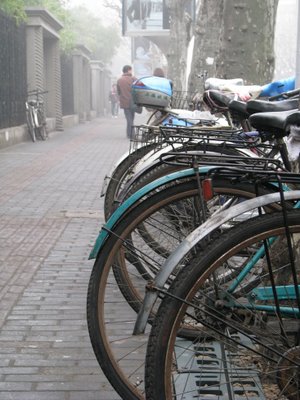 Last week, I went for my first bike ride since I was a student living in Davis. We borrowed my parents' bikes after work and went our for a quick spin.

Jon and I buzzed down the street and flew past vineyards and cruised along under the clear blue sky.

Our helmets had little brims to shade our eyes from the sun, something the helmets of my childhood lacked entirely. Six miles went by like nothing, easy and smooth; I barely broke a sweat.

The joy of zooming around on two wheels for fun is foreign to me. I've never been a huge fan of biking. When I was little, it was the way we got to school. The distance between my house in Newark and little Bunker Elementary School used to feel like an Ironman... hundreds of leg burning miles, block after block of suburbia and traffic lights and pavement buckling above rogue tree roots. Now, of course, I find that it was less than two miles total.

Still, we had to cross Cherry Street, a massive intersection where my littlest brother, Curtis, was once hit by a truck. I remember his bike flipping up in the air and his little body crumpling as he hit the pavement. The truck driver squealed away from the scene of the crime without looking back, but many other good people stopped to help.

Eventually, Curtis was strapped to a stretcher and driven away in an ambulance... the EMTs gave him a teddy bear which he cherished for many years after the incident. Curt was fine, but while Ted and Curtis kept biking through high school without any qualms, I never got completely past that terrible day. Vulnerable little Curty on a bicycle at the mercy of a demon truck.

With the exception of a Fourth of July bike show my brothers and our friends and I put on for all the parents when we were very young, biking always seemed like such a chore. Even securing a baseball card to a place on the frame where it could snap between my spokes and mimic a motorcycle motor didn't quite make it cool.

But now I'm giving biking a go once again, and it does feel cooler than it did.

After our short excursion, we returned the bikes to my parents house and went home. Later, Dad sent me his own childhood reminiscences about bikes, and I thought I'd post them here because it's fun and funny, and because he remembers his specific bikes so fondly. (I suppose if I gave it a chance, my deep purple Schwinn Sidewinder would take up residence in some happier corner of my memory, too... but that could still take some time.)
Bike Memories by Mark Pancoast 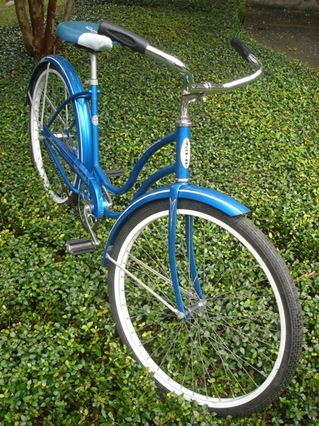 When I was a boy, I was a late bloomer to bike riding, not learning to ride until I was in second grade. Shortly after learning to ride, I was pedaling down my street with my sister, on our way to school, when my foot slipped off the pedal. I landed on the convenient "boys" bar on the bike and proceeded to fall off, hitting my head on the concrete street.

Time passed, and I next became groggily aware that I was being held under both armpits by a stranger who was at my front door explaining to my mother that she found me in the street. I believe my sister, Mary, said later that she left me in the street while she rescued my bike and placed it up the long driveway in the garage.

Apparently the lady came along to find me frothing at the mouth or something like that, and decided to haul me to the nearest house rather than putting me out of my misery by running me over in the street. My mother took me in, laid me on the couch, and later took me to the doctor. This was the first of four or five pretty good concussions I experienced as a youth. Of course, you are well aware that I still find the time to periodically fall off my bike or ride directly into walls as an adult*.

As a boy I rode a 24-inch black Schwinn called the "Typhoon." The name was in white on the black medal chain protector. I loved that one-speed tough-as-nails bicycle. I could be late for supper, ride into the backyard goin' about 30 mph, and jump off to run in the house, not ever stopping to get off. That black buzzard would just keep flying in the general direction of the garage until it slammed into something, anything. I just had to be careful it never hit the cars.

Mary's bike, which I later inherited, was a 24-inch "girls" bike called the "Hollywood" that was a beautiful Schwinn blue. The Hollywood, too, was very sturdy and was the mode of transportation most often used by my buddy John Vulpo and me. We rode everywhere on that Hollywood, Vulpo on the handle bars and me grinding up the hills, feeling like my thighs would explode any second from all the blood being pumped into them, giving me strength enough to reach the top of the hill. We laughed and talked the whole way. Being in seventh or eighth grade and riding double on that bike in order to get to our next baseball game, our girlfriends' houses, etc., was our entire existence.

My parents went all out and purchased a 10-speed Motobecane bicycle for me when I graduated from eighth grade. I still remember we bought it at Terry's Bike Shop in Countryside, Illinois. I rode it home and zipped all over LaGrange and Western Springs for the next several days. It really moved compared to the old Schwinns. After a few months, I was well into high school and anxiously awaiting the day I could get my driver's license.

The Motobecane got lost back in the bowels of the garage once I had a driver's permit and chose to drive anywhere I could during my sophomore year of high school. Once I was licensed, I almost never rode the Motobecane again.

I remember my older brother, John, asking if he could borrow it a few times when he came home on breaks from college. I sort of wondered why he would want to ride it 20 - 25 miles. It didn't seem fun to me anymore. I think John eventually took it to college. I didn't care. I was driving one of my mom's new Monte Carlos.

I don't remember the brand of our current bikes. They are decent, utilitarian... crosses between mountain bikes and street bikes. Our past bikes were not able to stand up to the 2 or 3 times a year Mom and I used them. Or it could have been that they couldn't withstand the 9 or 10 all-hell-has-broken-loose uses of your brothers and their calm, careful friends.

I think I'll go out now and take a little ride around the block. Think I'll go for a little spin, and I'll let my mind wander back to that time when Vulpo was on the handle bars and I was pumping the pedals, and we were headed over to...

* Dad took a serious nosedive off his bike one day when our whole family was biking home from the park. He was bringing up the rear, so we didn't notice that he was gone until we got home. The boys and I remember so little about that day and afternoon. Mom sheltered us from the tough stuff. Dad was found by a lady police officer who approached him because he seemed disoriented. He couldn't remember where he lived or his phone number... and when my mom was eventually called to the hospital for him, she arrived to find him injured and groggy.

We, being Pancoasts, do find humor in this story. It's the best way to mask the fear and pain. (Dad pretends that smacking his head on that concrete wall in 1993 is to blame when he can't remember the names of vice presidents today... and we let him use the excuse.) Besides, it ended okay.

I don't remember learning to ride my bike for the first time, but I love that riding a bike is something that sticks with us forever once we learn it. I love that almost every little kid has used a bike at some point in his life, has pretended it was a horse or a motorcycle or a hovercraft, has seen it as the first big step toward independence. It's a good thing to know, and a good thing to remember.