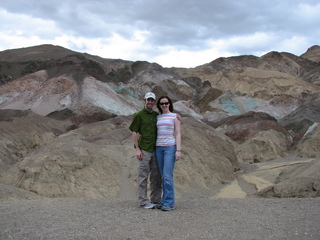 We see rocks rubbed raw by the sand and eons of devilish heat. Some places, the rise of dirt from valley into foothills is as graceful and pink as the naked thigh of a woman nestled in mauve bed sheets. The terrain is alien... from the odd extra terrestrial shapes in the stone to the unnatural colors. Not just green but hyper copper green. Not just orange but fluorescent sienna and orange. Toxic colors.

A loud snap like a bullet discharging from a gun yanks us from our reverie. There is a crater in the windshield of our rental car, small but obvious. It casts jagged, aquatic reflections back at us.

We sigh, wondering aloud about the cost of repair, the amount of our deductible. I comment that I hope we have a glass deductible waiver. Nothing is less childlike and imaginative than a conversation about insurance. But soon the haunting landscape recaptures our attention and we drive on.

Jonathan parks at Badwater, the lowest point in the contiguous United States. Hand in hand we leave the road and walk into the valley. White swaths of salt flat run untamed at the center of the basin floor. Beneath our feet, rolling mounds of salt crunch like fresh snow. Soon our soles are packed with pure white salt. We are not alone. People move in pairs and families at odd intervals up and down the silvery ribbon of the path. Here and there we pick up laughter and bits of conversation, but on the whole there is silence. Curiosity breeds quiet.

We are hundreds of feet below sea level and, even in this desolate, dry place, I feel as though we are deep sea diving. Perhaps it is the vastness of this lonely place; perhaps it is the sparse vegetation or the way the warmth on the horizon wiggles and tricks the eye.

From there we drive north again and take a detour at Artist's Drive. This loop is aptly named. Not only are the splotches of color across the face of the rock like droplets falling from God's distended paintbrush, but the varied and plentiful changes in scenery, one after another after another in such a short span, these follow the unpredictable path of an artist's imagination.

The silver stripe of the crack in the glass noses forth, a snake in clear water.

Jon pulls off the road and jumps out to take photos of the rock. I remain in the car, scribbling my thoughts on scraps of paper, napkins and plane ticket stubs.

Inspiration is thick in the unsettled air. Clouds sagging with rain are tumbling over the mountain tops. I record the poetry I see in the golden canyons, the volcanic residue. My mind is set spinning by the juxtaposition of glory and violence. To my right there is a wash of yellow sand peppered with bunches of perky dessert holly. To my left is an ominous ridge of black rock trimmed with deep rust, a layer of red so dark and liquid it appears like blood on a knife exiting a wound. There is too much to see in this dessert.

The buzz of an angry bottle fly unzips the silence, whirring behind me on approach. I realize there is no fly at all but rather a man on a bike. He glides downhill and whips past my window. The basin is unfolded below like a welcome mat.

Driving west across the valley we observe the expansive stormy sky through the windshield, riddled with shining, finite raindrops. The patter of rain matches the thrum of our tires on the long, straight road. Sunlight breaks through the wall of clouds and rushes at us, shattering the mellow grayness of early evening and reflecting off every surrounding surface... the hood of the car, the lenses of our sunglasses... and then we notice the land around us, moments before blank and brown, now we can see a million flat, black stones, their wet faces aglow with sunlight. For acres we can only see this dazzling ocean of rained on rocks.

To the east a rainbow arches prettily across the sky, as lovely as the sound of a woman humming a hymn.

Driving farther west, we transition from flat, rocky land to a segment of low dunes, golden brown and smooth, rolling and coiling against the horizon. The length of each ridge is marked by a strip of black sand, stark in contrast to the dun base, and gives the dunes the appearance of a sleeping dragon.

At one point on the horizon, we can see a place where the Panamint Mountains must have pierced the sacred membrane of the sky; a pillar of saturated gray and white clouds pours down at that spot, evacuating the heavens and flooding the earth.

Striations of cloud in the sky mimic striations of rock in the ground, and I am reminded of the cyclical nature of things and how soothing it is to see God's patterns on such a grand scale.