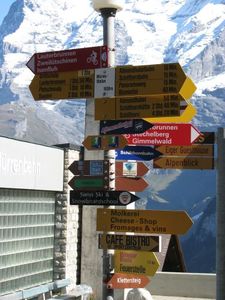 Continuation of She Loves the Transportation in the Jungfrauregion ...

In the little hamlets of Switzerland (like Interlaken and Murren), there is no sense of hostility towards the newcomer. The locals are used to and take advantage of the tourist trade, and they are well aware that the value of their magnificent Alpine view does not depreciate. In fact, if anything, it is a joy doubled when shared. We were welcomed at every turn.

Later, at a picnic table owned by the hostel in Gimmelwald (one I'd seen advertised on the internet prior to our trip and would definitely find comfortable enough to use in the future... It has a hot tub outside in view of the mountains!), I peered into the giant canyon between us and the Alps.


The grandeur of my surroundings inspired me to sit at a picnic table near a cliff and scribble the following on a piece of paper:

The tinkling of cowbells in a hundred different tones echoes along the rolling hillside. Between the emerald green of the meadows and fields and the cheerful geraniums in all of the window boxes, this place feels alive. A steady line of paragliders sweeps through the sky not so far above us, but the canyon is so vast, the valley so wide, the opposite cliff so high and sheer, that soon the colorful paraglider chutes are more like tiny, earnest blossoms against a mossy, gray backdrop. 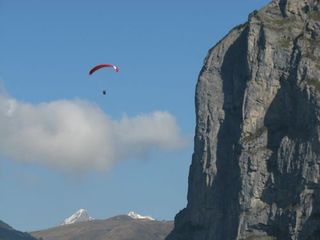 Of course, the real flowers growing wild in the grass, have no equal. Sweet and delicate, they defer to the immense landscape when cameras are clicking, but bow your head closer to the soil and you'll be dazzled by the intricacy of the butter yellow petals, the milk white stamens.

Breathe in the Alpine air, so cool and refreshing you'll wish it could be bottled to be taken home. Unfortunately, only the real thing will do. And besides, if you did take home a bottle, you'd be unable to escape the honest, brutal comparison it would require of your City air, the real life breaths you take and forget about every day. It is better to have this phenomenon of recognizably perfect breathing air only on vacation - otherwise, it would interfere with your workday productivity.

Rather than making the steep walk back from Gimmelwald to Murren, we opted for another ride on a gondola, this one slightly smaller than the first. We shared the vehicle with mountain climbers, paragliders and an elderly farmer with a long, white beard. 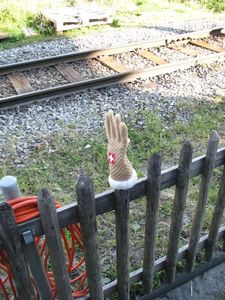 Though we could have taken the train from Murren to Winteregg, I had a little glimmer of hope left that I'd find my lost glove, especially since the temperature on the mountain was dropping with the onset of evening.

Losing a glove is something I'd day dreamed about long ago when I read Little Women for the first time and the reader gets to see Meg, the oldest March sister, fret over her lost glove (which the reader knows was found and then lovingly pocketed by Laurie's tutor as a symbol of his as-yet-unspoken feelings for Meg March). That scenario would be a completely elegant and acceptable way to lose one's glove... but I'd just plain dropped mine.

You'll not believe this... but I found my glove. Some good Samaritan had plucked it from its spot on the ground and wedged it over a short fence post to our right, fingers in the air, as though signaling to us, calling, "Greuzi, folks! I'm right here!"

Upon reaching Winteregg, we immediately ducked into the lone dining establishment, a diner filled with long light pine tables and benches. We'd made it just prior to closing. The hostess hurried our hot chocolates to the table, and we wasted no time wrapping our icy fingers gratefully around the porcelain mugs. Jon produced a package of chocolate-covered wafer cookies. Playing chicken with Chocolate Overkill, we began dunking the cookies in the hot chocolate and savoring the saturated chocolatey goodness. 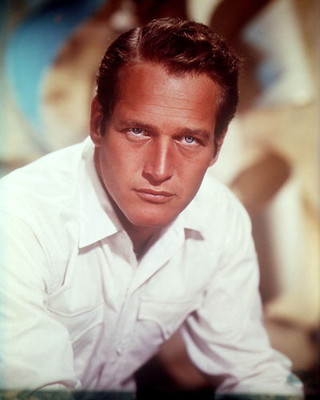 In the background, a talk radio station was playing what I could only assume was a profile of Paul Newman, one of my favorite actors. I could hear audio clips from his most famous films, Cat On A Hot Tin Roof, The Long, Hot Summer, and Cool Hand Luke, then the commentators would speak about each clip in German. As I could not decipher the commentary, I used it as a chance to play Name That Film... with myself. I won. Minutes later, as Jon and I were packing up to go, it dawned on me that what I'd been hearing could have been a posthumous tribute to Newman, something that tugged at my heart a little bit. I'd not yet heard that he'd passed away, and later when I confirmed the fact, it was hard not to cry.

I'm so familiar with the classic actors of his generation and the one previous to it that every time a faded star passes away, I'm overwhelmed by nostalgia for a time that is only mine by adoption. Just in the last five years I've lost Katherine Hepburn, Bob Hope, Gregory Peck, Theresa Wright, and now Paul Newman. Most recently, Newman was the voice of the gruff, classic car in the Pixar movie Cars. His animated automobile character was a bright, insistent blue... just like Paul Newman's famous eyes.

And so, I would like to dedicate this entry to Paul Newman and to his widow, Joanne Woodward. Thank you for your impressive generosity to charity and your dedication to one another, an inspiration in times as fickle as these.