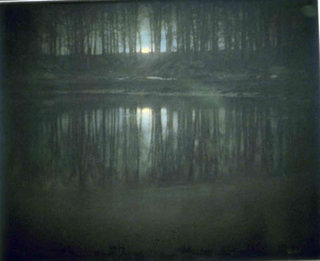 In a cluster of doubtful cedars, branches laden with despair, is an ink-black pool of water surrounded by obsidian stones. When a girl on a journey stops to rest, wandering into the woods, she thanks her god for shelter and moves to take a seat. She pauses at the poolside, the loneliest spot in the land, and looks for her reflection.

There it is, her face, the one she hasn't seen in so long. After all, she hasn't stopped for rest in days.

Ground has been covered, battles have been fought and won, mysteries have been solved, questions have been answered... but her face has been left unattended, unvisited.

Leaning over the pool, she is astonished to see that her hair is knotted and tangled, has become a thicket of burs and grease. Dirt is caked in the crevasses at the base of her neck and, yes, there behind her ears. Her nose is sunburned and her lips are chapped. She raises her hands to poke and prod at the sallow cheeks and thick eyebrows, grimacing at herself, but drops her arms in defeat when she sees the black residue beneath her ragged fingernails.

She knows she ought to ignore all of this, that she should squat at the water's edge and take up a cupful in her hands and drink it and then keep moving. But the girl in the water is heavy and soft. She bears no resemblance to the Warrior Queen, the Lady, the Woman of the Year that the wandering girl has always wanted to be.

And so, surveying the quiet wood around her, careful that no one is there to see, she lets her limp, soiled garments flop in a heap on the ground, and dips a tentative toe into the pool. It isn't warm, but the thrill of potential cleanliness tugs her forward and soon she is all the way in, up to the strong slope of her shoulders.

She treads the black water, splashing and giggling, scrubbing at her face and picking the dirt from beneath her nails. The miles of effort and plans and angst slough away along with her dead skin cells and lifeless strands of hair. Her index fingers work at the grime on her eyelids and between her toes.

Nothing can be cleaned fast enough.

She is furious, dragging her sore, cracked lips against the sharp edge of her own teeth to peel the bits of dead skin away. Her body contorts as she attempts to reach every inch of her own skin, scratching and picking and rubbing it raw. The payoff begins to show through.

Soon she is succumbing to her own sparkle. The rosy light has returned to her cheeks and her shining, dark hair slicks back from her brow and follows the scoop of her scalp and the nape of her neck, a cascade following the line of her spine and ending somewhere beneath the dark water.

And as she bathes, she drinks huge gulps of water from this spring. It is fresh and filling, and she relishes the cold as it spills down her thirsty throat and radiates from within her stomach.

A bit goes up her nose and she sputters, blinking and coughing and squeezing against the flare of her own nostrils. It hurts. But the pain, the sting in her nasal cavity, feels clean. She considers how much dust she has breathed in over the years, imagines it crusting and layering like sediment near her eyes and around her brain. The thought scares her, and she leans her face down and sucks the water in.

The stabbing burn makes her cry out, and the sound echoes against the cedar trunks and plays between the fallen logs. No one can hear her. The water sloshes against the edges of the pool. Over and over she tries to breathe the water, tries to clean her insides by inhaling it.

The bubbles cease as her body flutters down and away, like the last leaf set free from the branch of a dying tree.

In a cluster of doubtful cedars, branches laden with despair, is an ink-black pool of water surrounded by obsidian stones. When the next girl pauses by the roadside, considering a respite among the trees, she hears the hint of a whisper filtering through the needles. Soft as moss, the voice warns this next traveler to keep to the road.

"You may be seeking your reflection, but you will not find it here. A dark mirror will twist you until you believe you are all wrong. If you stop here, you will be overcome by loneliness and eaten up by your own shortcomings. I know. It happened to me."

The traveler, weary but forewarned, turns her face to the west and continues to walk, choosing to look to the world, to the heavens, to the hearts of her friends to find a more accurate estimation of herself.