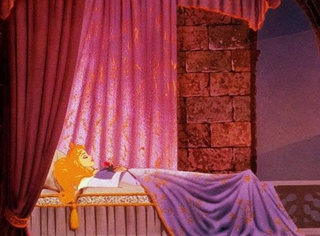 The pounding bright, white light of my laptop screen screams at me: "Something! Anything!"

It mocks me: "Just write words. You remember words , right?"

It antagonizes me: "Someone else is out there right now, licking the envelope of their submittal to the publisher. And you're eating string cheese and watching House."

Laundry is piled in my living room, folded and sorted but still in stacks. Dishes are accumulating in the sink and on the kitchen counters. I've lost count of the used razors in my shower.

It might be okay to slack off like this if I was actually producing something. And for a while there at the very nascent part of the year, I was producing. There was a story. I'd struck oil, and the fountain was unimaginable. Finally I had some meat to deal with. Plot complexity and character profiles and inter-character politics and time lines. Finally.

But not tonight. What happened?


My latest theory is that my imagination is hibernating. She was mid-sentence when she noticed that her toes were cold. It hadn't occurred to her that Winter had come the week before Christmas. I distracted her as long as I could with presents and time with friends and good, hot food. But the second she saw Winter skulking in the back yard, my imagination buckled in for the long haul. Now I must wait for her to snooze it out. How long will this take? Who knows? I fed her enough over the holidays to push her through to March or April at the least. Those mashed potatoes on Christmas Eve might extend it to May!

The good news is that while she's sleeping, I can watch movies and eat string cheese.

It's not really worth it in the long run, though. String cheese goes straight to my thighs, and I've already watched too much TV in my lifetime. If I had any wherewithal, I'd use this extra, unproductive time to clean out my refrigerator, apply to graduate school, master Yoga, cure the common cold and petition to have myself named as Bob Hope's Number One Fan of All Time. (Not only do I deserve that title, but the man deserves to have someone have that title... Totally worth the effort!)

So, let's say I grabbed my imagination by the shoulders and shook her awake. If she wasn't too irate, she might spark something new within me. Or, better yet (because I hate waste), she could jumpstart the story I began at the beginning of the year. It's much too fanciful for me to handle on my own. I like reality. My imagination lends the sense of the far-fetched. Maybe we could work out some kind of schedule where I promise to allow her to sleep for twice the amount of time she spends awake during a session to inspire me. And I'd give her free Starbucks and shoulder rubs. (Just because I don't drink coffee doesn't mean my imagination must slog through her mornings like a zombie. She likes the peppermint mocha, by the way.)

Tonight I will dream of slumbering bears, their massive paws wrapped protectively around my imagination and squeezing her tight. Or maybe I'll dream about string cheese. Either way, I hope that tomorrow I can get something other than a list of vague, ridiculous excuses for not writing out on paper. And the next time my imagination says, "My toes are cold. Oh goodness, would you look at the time! I must cease my splendid cause for creativity in favor of my annual three-month nap," I'll smack her awake and say, "Listen, Freckles, you're not bailing on me this time. Grab some socks and get back to work!"

Or not. She sometimes needs her beauty sleep. Nothing like an ugly imagination to stop a writer dead. And we haven't arm wrestled in a long time. There's a chance that she could take me.