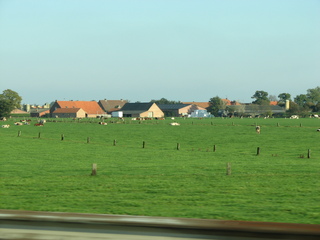 I'm behind. I know it. But we've been convalescing the last few days, hiding away at our friend's home in Klegod, Denmark, right on the coast. More about that (much more) later. First, a few words about The Netherlands...

We only drove through.

I know! Crazy! How could we not stop? How could we not wander in the rolling green pastures, visit with the milkmaids, ring a few cowbells...? The short answer is that we didn't have the time. In fact, we were lucky that Holland, as it is apparently sometimes called, was on our way to Denmark. After leaving Brussels, we spent a few hours on the road and swung our way up through that little northern country.

So, what was my impression?

I wanted so badly to love the windmills. After all, isn't that what we all think of? Holland. Hmmmm... windmills and wooden shoes and girls named Heidi. If you're Joey Tribbiani on FRIENDS, you think Netherlands is a "make believe place where Peter Pan and Tinkerbell live."

I looked for cute windmills. Mostly, though, I only saw towering, sleek ones. Red and white. Long, lean and powerful. Churning the air. Obstructing the flight paths of the birds. Occasionally we saw trucks hauling the individual pieces. Long, long trucks. And each could only take a single blade or a third of the tower. But no adorable windmills, stout and timbered. And no milkmaids, either. Bummer. 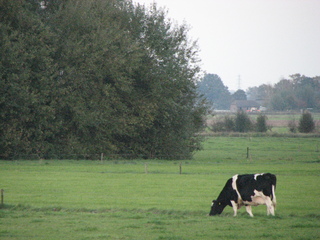 Instead, I fell in love with the cows. They were everywhere. And not the forlorn crowds of stinking Manteca cows, either. I'm talking about Holsteins. Black and white, proportioned like the perfect animated characters in books we loved as schoolchildren. They blink and sway when they walk. They are milked by hand.

They seem so happy.

We blew past most of the fields... but when we did stop to take pictures or stretch our legs, I discovered that there was nothing more peaceful than the calm calls of the cows as they ate and swayed, ate and swayed. In fact, this is what I now believe the Christmas carol "Away In the Manger" means when it references the cattle lowing. I'd never heard lowing before. It's nice.