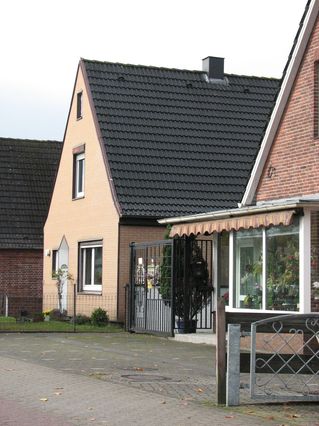 To begin, I'd like to mention that the title of this entry is accurate, but only to a point. I have actually loved the bricks everywhere. For all the talk I've ever heard about European architecture, the different styles and types and ages, I've never heard anyone reference the bricks. This is an outrageous oversight. Brick is beautiful, and California is sorely lacking it. I understand that this may be due to severe building requirements, earthquake standards, etc. But people, we're missing the sheer beauty of one of the most simple building mediums known to man.

Every city, town, enclave... everywhere people have congregated to live together, large and small, is graced with reddish, brownish brick. The facades of the buildings catch every ounce of sunlight and reflect it back, warm and easy on the eyes. Post offices and hardware stores appear stately. Homes stand like miniature castles. White window boxes, plain in any other environment, pop against the red backdrop.

The red walls spring up like flowers amid the green fields as we drove from Hamburg, north to the border.

We swung into Rendsburg for coffee. I hate to describe the little foreign towns as quaint. Somehow that word has become derogatory in our culture. Unfair. It's the perfect word. Synonyms include old fashioned, charming, pretty, antiquated, picturesque, appealing. 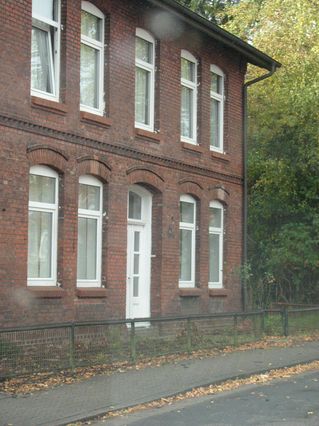 Our little car (a black, manual, diesel Mercedes, which has been very trusty this trip) swung around the corners of Rendsburg, and each sidestreet took my breath away. Between lanes of autumn-encrusted trees, sidewalks covered with piles of freshly dropped leaves, are the houses of the people who live here. Houses they may take for granted, as I often do my own. Houses they leave in the morning on their way to work, and return to afterwards in the dark. I wonder if they ever pause in the middle of the street and just look. It may be the steep angle of the roofs; it may be the white-rimmed eaves or the aforementioned window boxes; it may be the doors, each one unique.

But I think it's the brick. Astounding. Only a trickle of sunlight had yet made it through the clouds when we entered town, but bouncing off the bricks, it made everything appear brighter, better.

Even the McDonalds called out to us in a different way. Don't judge. We were in a hurry. And the McDonalds here are nicer, cleaner, slightly more expensive (we were using the BigMac Index today, ourselves). Also, some of the newest ones have a McCafe inside. And the McCoffee Jon had was better than a lot of the coffee he's come across since we've been there. Poor guy. He misses having a Starbucks or a Peets on every corner. Spoiled American.

Anyway, while there are a zillion things to love about Germany, the bricks on every building thrilled me. Someday, if Jonathan and I are fortunate enough to build our own home, we'll be incorporating bricks into the facade somehow. I don't know how we've been living so long without them.