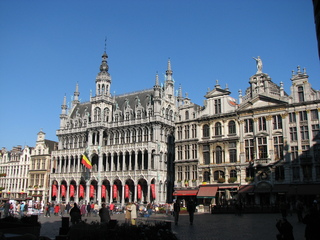 There is a square in Brussels which boasts being one of the top tourist destinations in the country. As we had only a single morning to spend in the city, we opted to check out The Grand Place (as it is called) and its surroundings. We couldn't have made a better choice.

The square itself, centered around the Hotel de Ville, it very grand indeed. Giant old buildings with cathedral-like facades and latticed buttresses sit along the perimeter like a group of old men chatting about the weather. Hidden in the pockets of their old tweed coats, as any good grandchild knows, are sweets and treasures and even heirlooms to be found. Twisting away from the square in a thousand different directions are delightful side streets peppered with shoppes, boutiques, pubs, cafes, and of course, chocolatiers . 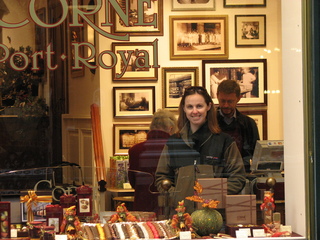 Thankfully, Jonathan was just as easily seduced by the delicate, understated advertising of the chocolatiers as I was. He didn't have to drag me out, drooling. But I will say that we needed to run an intervention collectively on ourselves to get us into a store selling something a trifle (did someone say truffle??) less fattening. Lace. 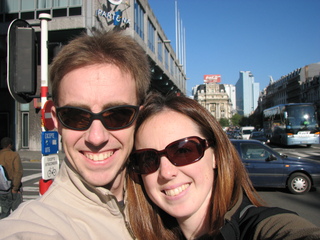 We shopped and strolled, relishing the patter of feet on cobblestone, the smell of chocolate wafting from around each corner, the mingling of a thousand different languages as tourists endeavored to see as much of this place as possible.

Of course, not every smell was good. Fish markets exploded every few blocks, oozing the odors of crab and mussel and squid. Carts were out in the open, covered in fillets and crab legs. Jon asked if the fish guys were aware that they were openly admitting that their fish was poisoned! Hmmmmm... time for a French lesson. I sang to him a bit from Little Mermaid. "Le poisson! Le poisson! How I love le poisson!"

It's not an easy city to navigate, of course. In fact, we haven't yet seen a European city that could be classified as "easy" to navigate. The biggest issue is that a single street can (and usually does) change names six times in the course of a mile or two. With every slight change in direction, even by just a degree or two, Rue de Josephat morphs into Rue de la Louise into Rue Bacourt into Rue de J.F. Kennedy. (Okay, we didn't actually see that last one, but it is a real street in Brussels. Funny, huh?) 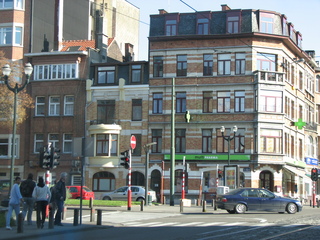 Our morning dawned chilly and perfect for exploring a new city. Bright blue skies streaked with clouds on a mission to somewhere, speeding by on the wings of the wind. Just getting into the downtown area was rough. My husband is doing a wonderful job at the wheel. Attempting to decipher traffic signs AND pronounce foreign street names AND squeeze down super narrow one-way streets and through roundabouts is tough. Add a wife on the verge of a panic attack because the map doesn't seem to reference a single street you're on at for a straight fifteen minutes... er- he's doing really well.

I was starving by the time we got in. From afar I noticed a rather demure little sign hanging from the front of a building which read: Maison des Crepes! Say no more. Crepes are thin, delicious pancakes, and can be wrapped around a variety of ingredients to make delicious wraps for lunch or even better desserts! We chose lunch. Mozzarella, tomato, basil and ham. Delicious! And, much to Jonathan's surprise, I ordered the meal almost entirely in French! Madame Fong would have been so proud! 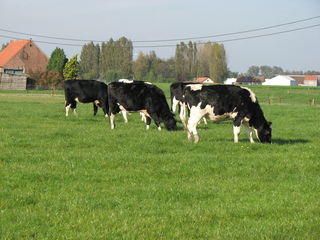 We left much too quickly (something which seems to be characteristic of the trip thus far). I could have spent a week digging my way through the street markets and tiny shops, both legitimate and silly. Oh well.

Leaving the city, we headed north to the Netherlands. Just before crossing the border, we attempted a geocache near the town of Reet, Belgium. We wound up along a small gravel road skirted by corn fields and colorful trees. All around us were rolling, gleaming green pastures dotted with happy cows (and so far from California!), the crisp black and white patterns of their coats contrasting with their homegrown emerald background.

Unfortunately, it turned out to be a puzzle cache. But we found the first piece, and that counts as caching in Belgium!

By the way, we're learning an important word in several different languages. Ausfahrt, Sortie and Uit mean Exit. So much driving. We are in the midst of the 5 and a half hours of total driving time from Brussels to Hamburg, Germany. Our sweep through the Netherlands lasted an hour and a half or so, and every single stretch gave new strength to my definition of the word picturesque. Expanses of green fields wrapped around cozy, half-timbered houses and barns, grazing ground for elegant horses and darling ponies, filled the miles. Windmills stretched their arms to the sky and looked almost ominous at dusk. 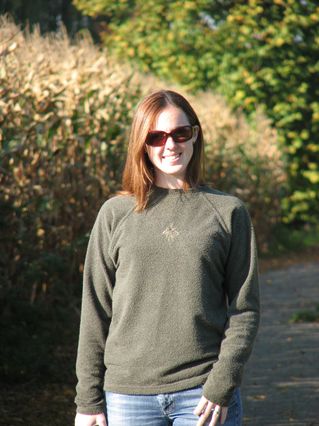 It is 7 degrees Celsius outside. When we stopped for Petrol (Diesel only... something else new), I jumped out of the car and jogged over to one of those cow pastures to take some pictures. I was so wrapped up in framing the shots (26 in all) perfectly, cows, trees, farmhouse, barn, that I didn't notice the temperature dropping. By the time I was through, I had been chilled to the bone. I sprinted back to the car to thaw out.

We are still 275 kilometers from Hamburg, our stop for the night. Because we wiled away the hours in Brussels, and because we accidentally got caught up in the near rush hour traffic of a cool-looking city, Antwerpen, Belgium, and because we paused to swing through the city of Deventer, Holland to see what, if anything, was open at night, we are way behind schedule and driving in the dark. And (look away, Mom and Dad) Jonathan is enjoying the whole "no speed limit thing" here on the Autobahn.

Interesting fact, the windmills have warning lights for low-flying aircraft attached to them. In the dark, these lights blink every so often, red and slightly demonic, and highlight the spinning blades. It's creepy. I am thinking of Frankenstein's monster.

Tomorrow we will make the 4 hour drive to our friends' house in Denmark. It is our intention to geocache along the way. According to our very handy guidebook, the terrain should be similar, the temperature colder, the food fishier and the all-around vibe more peaceful. Aside from all this blasted driving, however, I'd say that our time spent in all four countries so far has been absolutely lovely. Jonathan has asked that we spend our next vacation someplace small. I have suggested Bali.

(Speaking of which... Alyssa, if you're reading this, stop right now and go buy another copy of Eat Pray Love. I'll pay you back for it, but you must must must read this book. You must read about a woman who slams on the breaks of life and takes a sharp, unexpected, adventurous turn, and stomps her way through three countries that begin with the letter "I", and faces every one of her fears and flaws to find that she is capable of the utmost joy! I love you, and I hope you will find this book as delicious and inspiring and real as I did.)

Other people should read this book as well (I finished it on the plane), but only if you're looking to discover how one hyper, intriguing, intelligent, witty woman learned the importance of good food, good friends, good sex, good prayer and, sometimes, good long bouts of silence.

(It is a "chick book," Dave. But a real man would find learning Italian and practicing Yoga and befriending a medicine man in Bali, at the very least, intriguing, and at most, awesome and sexy. Work on that.)

Okay, major tangent. We're still on the road. Jon wants to kick me out of the car because I told him that he would definitely get his coffee on time tomorrow because we can "cook it ourselves." Apparently you don't cook coffee. Who knew? And, in other news, we've been enjoying the radio in each country we've visited. In Germany we keep hearing the same song (in English). Big Girls, You Are Beautiful. I'll have to look this one up. Catchy.

From Germany, we send our love!