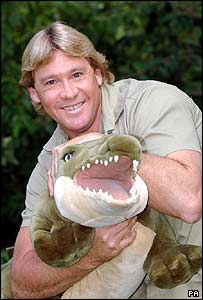 Today we mourn the loss of a great adventurer, a life-enthusiast, a loving husband and father of two. Steve Irwin, 44, suffered a fatal sting ray wound while diving off of the Australian coast. It is believed he died instantly; the dart pierced his heart.

I had a major, major crush on the guy when I was in junior high and high school. When he married his wife, Terri, in the early nineties, I was devastated. I have to admit, though, she's quite the studmuffin herself. She dove into the muck with him, held the angry croc's feet while Steve tied it's jaws shut. What a gal! She went everywhere with him. And I understand the dedication.

Something about the way he smiled through every wrestling match with every crocodile, I think there was some John Wayne in him... which may have been the real attraction. That and his cargo pocketed khakis, the way he deftly handled the poisonous snakes, the way he curled his lips around that ever-excited, "Crikey!" 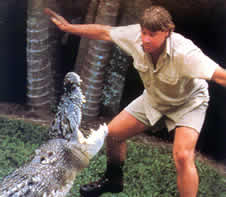 While I didn't try to catch every episode of his show or anything, I do have a picture of him on the first page of my first scrapbook ever. I dreamed of his sunny, Australian accent. Naturally, this led to some teasing, from both brothers and friends. I didn't care. In my mind, Steve Irwin was the last outlaw, the last really rugged, fearless guy.

When I was a sophomore in high school, rumor of his death was circulated on the Internet. The claim was that both he and Terri had died after being bitten by poisonous spiders. Everyone at school said, "Well, we all knew that was gonna happen." No one seemed to care. I, on the other hand, mourned in typical teenage fashion: I wrote a poem.

A guy named Justin let me in on the hoax. The poem was discarded and elation set in. The man braved death. He was like a god.

Granted there have been times when good ole Steve stretched the boundaries of normal behavior. Not only did he continue letting spiders scurry across his face, poking ticked-off cobras, juggling poisonous dart frogs... but occasionally he did so with his newborn under one arm. Oh, all right, he only did that once (on camera), and he acknowledged it was dumb. I forgave him. He seemed like he would be a very cool dad.

But as of yesterday, that has changed. He was filming a documentary, and the sting ray didn't appear to be a threat. I suppose, just as he handled every other excursion of his life, Steve Irwin smiled and splashed right in, eager to share his knowledge of exotic sea creatures with the world.

He leaves behind his wife of fourteen years, Terri, and his two children, daughter Bindi Sue and son Bob Clarence. And the rest of us, his fans, are left behind, too. The world won't be the same without his thick, muscled legs stomping through the brush, stalking lions or dangling writhing copperheads by the tail. I won't be the first to say it, of course, but he did die doing what he loved, and I hope that is counts for something. In the meantime, Steve Irwin's zoo will remain open.

I hope I get to visit it someday. 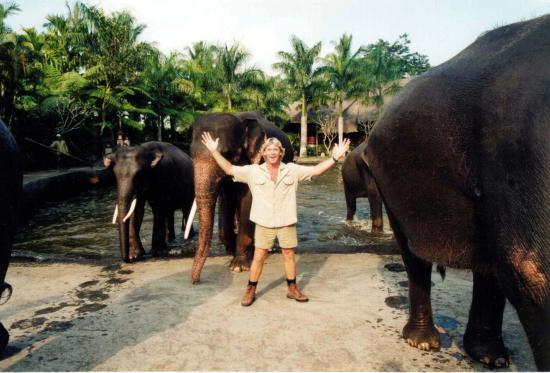