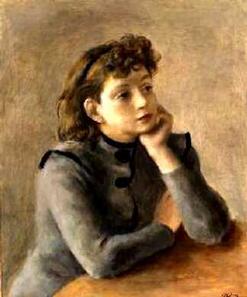 I saw a woman today, sitting with a man I assumed was her husband. He spoke to her animatedly, hands pushing his stories out into the air and across the table to his attentive audience. She nodded to the rhythm of his enthusiasm, understanding and supportive. Her hands rested, crossed and plain, on the table before her, but stretched toward her husband just enough that I noticed from afar. As his hands twirled, her eyes followed every finger twitch. When his story was done she smiled with her whole body, lips, teeth, eyes, cheeks, ears, shoulders. Her hands slid even an inch or two futher across the table. I saw the stretch of her gray cotton shirtsleeves. The husband smiled back and then, sniffing and blinking as if to calm himself after all the exertion of storytelling, reached for his drink. He wiped the condensation that transferred from his ice tea to his palm onto his jeans, and let his hands fall onto his knees. The smile fell from his wife's face simultaneously and she pulled back into her chair.

Later, he opened the car door for her. She stepped in, but even as her lips wrapped around the words, "Thank you," he closed the door, oblivious to her gratitude, or perhaps to her routine appreciation. It hurt to watch. No meanness, no spite, just oblivion. These people weren't particularly intelligent or successful, interesting or beautiful, generous or religious. Just people who would probably decribe themselves being in love with one another. But he didn't appreciate her, and she was silent.

You may think I'm overreacting to this, or you may decide I couldn't possibly have observed such details at a local Starbucks over lunch. Whatever the case, it spurred something in me, a little heartache all women dread and most of us have experienced at some level. And, thankfully, I was feeling poetic, too.

A feathery portrait of a woman
adorns a white wall
as shadows pass hour by hour
and questions hang on plump lips that never moved,
even when the model wanted to ask the painter,
a thin young man with eyes like the deepest black wells
in a West Virginia ghost town,
when he would lift his head and breathe,
stop his monotonous brush stroking and color blending,
break the layering of lighting and toying with angles,
and see her.

Instead, he painted her and her silence, a masterpiece.
He wanted to achieve the impossibility of
displaying what refuses even to be heard,
and she wanted him to spray his genius onto canvas,
be the realization of potential he'd only dreamed of.

She kept sitting, positioned in a gray dress
that once, in just the right light, had appeared silver,
neck craned this way and that way
until needle pricks of pain scurried up each vertebrae
and whined in her soft-curved ears,
ones he'd not spoken into in days, weeks, years.

Occasionally the sitting gave way to memories,
herself as a perfect subject, statuesque and patient, one
who realized her place as a vessel of true art,
one who embodied that place
so that watchers recognized her talents, too.
One man had watched every day,
from the windows of buildings, a place above the leaves
near the sky, heavenward.
His voice was soft like angels, questioning,
hopeful, honest, earnest.
May I please paint you?

Muse of art, passion, impression,
just the woman he'd discovered in the museum courtyard,
hair flaming in the spring breeze flecked with sun,
she touched him deeply to a heart he'd only imagined he had.
She quivered when he touched her back.
At the slightest tremor he picked up his brushes,
intent on capturing this magic luster of
woman enraptured.
His renditions were still, but close enough to the real thing
to draw applause.

He memorized the movement, the way her
bright eyes widened and fell, like ocean waves,
and he painted it over and over and over again,
until he no longer needed his model,
let alone his muse.

She stayed.
Sat in that gray dress every day.
Not once did she stir, cry out,
but rather chose to allow herself the silent agony
of being taken utterly for granted.

The painting: Girl in Gray Dress , by Robert Philipp