Last night I met Cindy and her roommate, Sru, and her new RA friend, Marta, in San Jose for a girls' night out. Dinner and then the much-anticipated Shakira concert. Yay!

We walked into the restaurant we'd chosen online wearing sparkly tops and blue jeans, enjoying our opportunity to be fancy. There are a zillion restaurants running down San Pedro Road, and we chose one called St. Peter's something... I'd advise everyone I know not to eat there. But I cannot remember the name, and I'm too lazy to look it up now.

Anyway, we walked in, and a very cute, curly-haired waiter met us at the door. He took the double-take we became used to as the night went on. Not because we were all looking so fabulous (though we were), but because Cindy's hair is currently cotton candy pink. All of it. And Curly, as he came to be called over the course of the evening, was flabbergasted.

A different guy had to come and take us to our seats because Curly wouldn't stop staring. And, unfortunately, while he hovered like a moth around Cindy's pink flame, he did very few things right. In fact, he judged all of us because of her pink hair. No wine menu for these girls. Obviously they're still young enough to do punky things like hair-dyeing. The man took our wine glasses away without so much as an offer.

Now, I don't usually order wine with dinner unless Jon and I are out for a special occasion anyway, but it's nice to have the option. Lousy waiting etiquette, Curly.

To top it off, the food didn't measure up. My chicken and sweet corn tortelloni (not tortellini, completely different thing) was okay. The spinach salad was so-so. The seafood was, apparently, awful. I wouldn't touch it because the eight dark blue muscle shells hadn't been removed. They gaped from within the linguini, salty smelling and sharp. Ew. The four of us passed our plates around to share, hoping no one would notice how uncouth we were (once judged... what's the point?). Curly noticed. He brought Cindy a completely unrequested third spoon. He ignored the rest of us entirely.

Since the rest of the girls mostly pushed their food around their respective plates rather than pushing it into their hungry mouths, and since we ended up sharing everything and I only ate a quarter of my own, we starved all the way through the concert. But I digress.

The HP Pavilion was overflowing with people ready to hear some very upbeat Latino music. Shakira is originally from Colombia. Her accent it divine. But it's her darling personality, the way she smiles through her songs and never takes herself too seriously, which endears herself to her audience. Granted, she's also gorgeous enough to captivate fans without her incredible voice. (A male friend of mine told me today he enjoys watching her perform just as much with the TV muted.) However, I can attest to the fact that she is overwhelmingly talented. 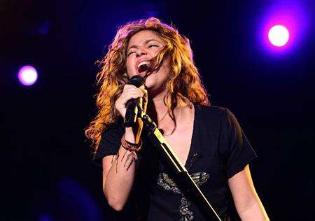 More than half of the songs in her set were entirely in Spanish. She's been around for a decade, but here in the states we've only been aware of her popularity for the last three years or so. Marta, Cindy's newest pal, is from Spain. She sang her heart out all night long, in both languages! It's amazing how music can translate emotion, bridging cultural and linguistic gaps. Even though my mouth and tongue couldn't move along with the Spanish songs, my heart knew the rhythm. I was completely moved.

And oh boy did we dance! Something about that hot, Latin beat and the evocative whine of trumpets behind devilish bongos gets everyone moving! Every hip in the house was shaking by the end of the night. Right now her most famous song is Hips Don't Lie . It was the number we were all waiting for, and it brought the night to a climactic, fantastic finish! Belly dancing and confetti, shadow dancers and energy.

We swung by McDonald's at almost midnight, stomachs growling, Shakira posters in hand, humming, "Senorita, feel the conga, let me see you move like you come from Colombia!"

Around 2:00am I finally fell asleep on Cindy's air mattress. My alarm was set for 6:00am so I could drive back to Livermore and shower before church. I was in the morning drama, a ten-minute comedy sketch called Nursery Workers Anonymous. I was Karen, the woman who had spent one or twenty too many mornings working with the toddlers and had subsequently scattered her marbles all over the church. It was pretty fun.

One line... "Yup!" But lots of goofiness, personality and heart. I don't know if our performance (there were seven equally quirky roles) will result in an influx of volunteers in the church nursery, but I hope so. If not, it may get people volunteering to participate in the drama ministry. We all had a good time.

Where was Jon while all this was going on? Yosemite. Where else? He's not a fan of Shakira. And today he climbed a new mountain: Mount Conness . I love his indomitable spirit when it comes to summiting these peaks. What an incredible nature. Couldn't possibly be more proud. (And I'm not even kissing up because he has to read my blog...)