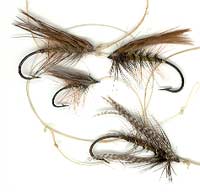 I've watched my father gear up for fishing trips many times in the last few years. And, while I never really sat down to observe, I noticed his efficiency and quickness as he handled the rod and the reel and the line. Not once did I consider how his length and level of experience with these tools might make his set-up time shorter than average.

Jon and I are off to the mountains on Friday night. We'll be staying at a friend's cabin North of Yosemite. And on Saturday morning we'll rise at the crack of dawn and drive to a pack station where we'll start a trail ride that winds up in the back country. Prime fishing locations await us at the end of the journey, so we need to be ready.

For our birthdays my folks gave us matching rod n' reel sets. Jon has been fly fishing exactly once, and he caught an enormous trout on his sixth cast that trip. He claims he knows how unlikely it is that such luck will pass his way twice. Look at me. I haven't caught a fish in years. But secretly he's hoping he'll do it again. And secretly, I hope so, too.

But gearing up for us took forever. Jon's reel was tangled. Mine was on upside down. And tying the tippet to the leader, even with the set of illustrated instructions in front of us, was torture. Pull the lines parallel to one another, twist and fold into a knot, pull tight. Tug.

After an hour (and if it took us that long in the air conditioned living room of my parents' well-lit home... Lord help us...), we went out to the backyard to brush up on our casting. Jon caught a tree and I deftly snagged the grass more times than I could count. In the violet twilight we couldn't see the little beige fly at the end of the transparent line. It hooked in the skin on my forearm and I yelped. But, as we all know, there's no crying in fly fishing.

So, I have new admiration for my Dad's skill as he twirls the flies tightly onto the end of his line. And I wish he'd been here today as we set up for such a trip. Let's hope he's with us in spirit out there in the wilderness. More importantly, let's hope I catch a fish!

(As long as wishing for things... let's make it bigger than Jon's, okay?)