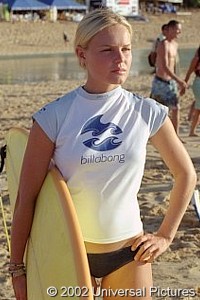 Adding to the list of my guilty pleasures (that I am apparently unafraid of sharing with anyone who reads my blog) is one of the worst movies ever made... Blue Crush . Starring the gorgeous Kate Bosworth, one blue eye and one brown eye twinkling, as the surfer girl of all surfer girls. She lives with her sister and two best friends in a beach shack in Hawaii, works as a maid because school wasn't her "thang", and lives off of rice crispy treats when she's broke.

Could this sound less awesome?

Well, the secret truth is that I once wanted to be a beach bum. No joke. Me, the girl who is deathly afraid of the ocean, wanted to surf. I understood the athlete mentality anyway. I know that urge to conquer something bigger than myself, bigger and stronger than anything or anyone I know.

Why didn't I do it? To begin with, I was way too white to be a surfer. And my family didn't approve of tattoos. Granted, these are only parts of the surfer image. Still, there was a darn good chance I'd be terrible at the actual surfing part.

Because of that obscene beast called the Ocean. It's not even that the water frightens me. I happen to be a very strong swimmer. Or, I was. And I don't mind the stinging, clogged-up pain of getting water up my nose (too much). Mostly it's the sharks.

It would be hypocritical of me to want to look the part, a tasty, kick-butt, surfer chick dominating the waves... and at the same time be upset with the sharks who agree with the "tasty" part.

Anyway, back to this terrible flick of a movie. Ignoring the love story... ignoring the predictible Mom-ditched-me-so-I-run-from-my-problems-too angle... ignoring everything, in fact, except the surfing... I feel good after it all. Watching someone, an underdog, get back up, swim back up after getting absolutely owned, is inspiring.

And I admire the fact that the best women surfers in the world advised the director as he undertook a film like this. It's tough to make an audience sitting in a movie theater or nestled into one comfy corner of a couch to feel the waves, to be splashed and crushed and wiped out. Somehow I feel it, though. They did something right. When the girls are sucked under and are struggling to find their way up, my lungs burn, too.

Plus, there aren't any sharks.

Now I work 8 to 5 every day. I do not have any tattoos (which is something I've considered changing, but old taboos die hard). I remain whiter than white. And my shark-phobia has not subsided. But I admire my best friend and Ya-Ya, Amy, because she throws it all to the wind and does this sport that I am so impressed by. I've been tamed, but she hasn't.

Jon and I are planning a trip to Hawaii within the next six months or so, but I don't think I'll attempt surfing even then. No, I'm more suited for beach volleyball, beach horseshoes, reading on the beach. We all have to find our niche. Mine is just obviously going to be found on dry land.

Thankfully, Netflix allows me access to terrible movies with zero plot and fantastic sporty-chick appeal... without forcing me into the embarrassing position of owning the darn thing.