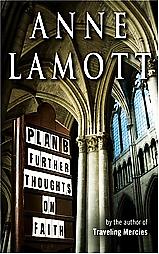 "Jesus was soft on crime. He'd never have been elected to anything." (183)

When I can hear a writer's speaking voice in their text, easy and authentic in tone and humanity, I more easily appreciate the point behind the writing. So many people can write, but so few can convey a conspiratorial wink or a bashful smile on paper merely through tone. Anne Lamott can do all of these things. Thus, I appreciate what she has to offer as a fellow creative spirit. I have loved her other books, partly because of their uniqueness and partly because I found Bird By Bird especially useful. I owe Lamott my return to writing regularly, because in that book she excused my cliches and my bad habits and my 'sh---y first drafts'. She told me that I absolutely was not alone in my exasperation or boredom as a writer. But we're not talking about Bird By Bird .

Let's get the elephant out of the room... George W. Bush is not eloquent, nor has he made stellar decisions in the last several years. He does not make me, a hard-core rightwing Californian, feel terribly safe. He bumbles and mumbles and laughs funny and undoubtedly finds poo-humor entertaining. But he is a good, kind man. And, best of all, he doesn't give a flying leap what Anne Lamott or any other crazy, leftist, hippy-elite, Marin resident thinks about him. Lamott is allowed her opinion, but talk about overkill. She should stick to truth and beauty, faith and humor. Criticism of anyone besides herself does not suit her.

That aside, I enjoyed Plan B. Lamott is wise in a cute way, but she can overstretch her limits, and she does too often in this book. Her inspiring moments were fewer and further between than in previous works, but each time a swell came my way I leapt for it. Her struggles as a liberal Christian, the single mother of an adolescent male, a former addict, an acclaimed writer under pressure to deliver a book that critics will feel is up to par... are honest. She takes unabashed digs at herself, even at her most flawed moments. Really brave authors strip themselves naked in front of their readers and then, rather than demurely covering themselves with the closest leaves or an awkwardly positioned arm and hand, they invite inspection. Lamott redeems herself in my eyes by admitting her own childishness:

'Others, of every race, came forward to support us, although they did not offer to help teach. I heard that people were talking behind our backs, and I wanted to call Veronica and tell on them'Pastor, Pastor, so-and-so was bearing false witness against us!' (74).

Not beautiful writing, to be sure. But that's part of Lamott's mastery. Her tone is reinforced by her style, and it changes periodically to really make a specific point. In this case she writes like a child, foregoing her usual flowery prose and mature rhythm in order to give the most accurate interpretation of her emotion at the time. Anne Lamott, a brilliant writer and an intelligent woman, will attend her own pity parties as the guest of honor, and she isn't afraid to admit it.

In between her admissions of childishness, egocentrism, confusion and envy, Lamott's material sweeps me away like a familiar river. Like me, she does not 'have the right personality for Good Friday, for the crucifixion: [she'd] like to skip ahead to the resurrection. In fact, [she'd] like to skip ahead to the resurrection vision of one of the kids in [her] Sunday school, who drew a picture of the Easter Bunny outside the tomb: everlasting life, and a basket full of chocolates. Now you're talking.' For just a moment 'Octopus Head' and I see eye to eye.

That's why I eat up her writing, because I want to understand her better, but I have to be careful not to let the current carry me too far from home. The woman is wild, crazy, not always my cup of tea. There are times when I merely tolerate what she has to say, as I would tolerate the views of any person to whom I must defer as my elder or my intellectual superior. While I loved the chapter about her time working with inmates at San Quentin, and while I was unsurprised by her protests at the prison's gates when a death row inmate's time had run out, I so violently disagree with her stand on the issue of capital punishment that I had to take time off from the reading in order to give the chapter its deserved equal consideration.

Educating convicts is important, even noble. I would love to admire her father's work with prisoners as she does. But the fact that he 'did not bog down in complex moral and ethical matters'victims' rights, recidivism' actually negates his usefulness in that capacity, at least in my own mind. That she thinks of that standpoint as positive diminishes her contribution for me, as well.

The chapter entitled 'Hard Rain' caught my imagination in a choke hold. First, it threw me. For some reason her rhythm got lost in the shuffle. I hate that, because I have no rhythm anyway. Finding a groove isn't easy for me. (Just ask Jon; I clap on the off beat. Whatever that means.) I read the chapter again. Little things like her references to being a 'crabby optimist' gave me hope, the incentive to find the value hidden in the text. For an entire paragraph she really talks herself up. I am not used to Lamott being excessively arrogant. Any published writer is allowed a little arrogance, but the paragraph that starts on 128 and continues, listing every anti-war move she made, crossed the line. I was rolling my eyes.

Then the rains came. In the book the rain 'suggests that you should go inside, rest, try to stay dry. The scent of rain is fresh and earthy, clean and woolly, of leaves and dirt, wet dogs. We get whiffs of our animal smells, of feet, sweat, and the secret smells of the earth, which she often keeps to herself. Rain gives us back something that has been stolen, a dimension we've been missing'our body, and our soul' (129). That same rain washed away my irritation with Ms. Lamott and her super-sized, Demo-crap ego. And the bulbs she planted as a form of prayer blossomed. As it turns out, this chapter is not about rain at all. It is about remaining vigilant, not only regarding the political administration or whether your teenage son is doing his homework, but keeping a close eye on your own tendencies when it comes to people. Don't hide inside. 'Get out of the damn car already' (132). Be of service; serve the community; be kind.

There, like the creamy center in a Hostess Cupcake, was the value, the moral. Lamott walks away from Plan B succeeding in providing her readers with further thoughts on faith, but I walked away slightly bored. I'll read her again, and I'll recommend her other books first, and I'll even recommend this book to a very patient, optimistic friend. The fact that I compared Plan B to a Hostess Cupcake really ought to speak volumes, though. I do love a good cupcake.