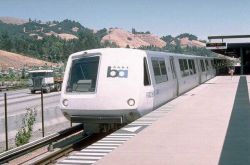 Hooray! My broker's license class is over. sigh Now only a review session (Monday) and the 3-hour test (Thursday) stand in my way. Tomorrow it's back to work with Mom. And thank goodness. I learned to love San Francisco during this last week, the longest of my life. But I will NOT miss BART. Nope. BART may have zipped me to class each day, but there were so many weird people on that one train. And they all found a way to take my train, too. Let's list a few of my (least) favorites:

Likes-To-Hear-Herself-Talk-Chick ... the woman stood loudly joking to her friends about how she heard that, "George W. Bush can't even pro-NOUNCE Katrina! No, HA HA HA, SER-iously!" I wasn't the only one rolling my eyes and wishing that she'd lower her viewpoint by at least a decible.

- No-Sense-Of-Personal-Space-Guy ... he found his way onto the train, cramming in just as the doors sucked shut and locked us all closely together. Very closely. At least you would have thought so. He was grabbing the ceiling rail right next to me, shoulder to my shoulder. I could feel his breath on me. And the best part was lurching to a stop and clunking knees with him. No, wait, the actual best part was looking around the car and noting all the space that was available for standing, but wasn't being used.

- Unnecessarily-Loud-Walkman-Dude ... he pushed through the doors of the train, bringing with him the joyful beat of "Cellllabrate good times, Come on!" Technically the bass-less tune was pumping from the walkman he held in his hands. And why, you ask, could everyone else in the car hear the song, too? Well, the man had accidentally pulled the headphones from the walkman, letting the music play through the speakers alone. Wonderful! In fact, it made me want to celebrate.

- Woman-With-Excrutiatingly-Abnoxious-Children ... I think her title speaks for itself. How sweet. Little Johnnie and Janie Junior were jumping back and forth over the seat in front of them, shrieking loudly all the way. Two! Four! Six! Eight! What don't we appreciate?! Children! Children! Ill-mannered Children!

- Self-Absorbed-Swearing-Guy-With-A-Phone ... "Hello, Mike? Mike? This is Jeff. Yeah, I need you to fax those Z29 Forms over to the New York office right away. No, the guy in accounting over there is such a @(*)#! Listen, the Limited Real Estate Clause has to be revised. Do that. Give me a #)(*@