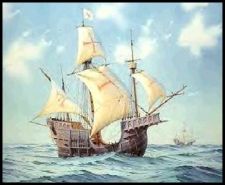 It was in my alone time as a child that my imagination took to the sky. Sitting cross legged beneath my parents' dining room table, I fancied myself in a mossy, green meadow sheltered by a willow tree. This tree spread her benevolent arms in many of my daydreams. At night I was lulled to sleep by the whispering of her leaves.

It was my mind that sent a thousand ships sailing across the seven seas. It was my mind that pulled up their golden sails and draped the wooden maiden at the bow with regal purple fabric. My mind invented the pirates, teeth bared and feathered hats tilted, that rallied to conquer those ships.

The pirates usually won (a fact I felt really guilty about), and I manipulated the scenario so that no one died and all the loot was divided equally among the pirates and their happy families.

Never was there a damsel in distress complicating the plot, disrupting the fight scenes and wandering nervously, even superfluously, around the edges. No, absolutely not. Any female character in my dreams knew how to handle herself. She could swashbuckle, scuba dive, parachute, use a gun (or a bow and arrow if necessary), dog sled, mountain climb, ride horses, speak several languages, fly a plane, kickbox, and drive a motorcycle.

And she was lovely, naturally and inexplicably gorgeous. To avoid being shallow I justified my heroine's beauty by attributing it to her inner qualities. Her kindness, intellect, sense of humor and generosity of spirit were what spurred on the sparkle in her big green eyes, her curly black hair.

I catapulted my female characters to the forefront. Pirate women sometimes sailed their own ships; a town in the wild West was often kept in line by a woman sheriff. Robin Hood had a little sister with comparable bravery, gall and attitude.

When I say I was alone as a child, I'm misleading you. Really I was surrounded all the time, by little boys. My younger brothers and their friends, my guy friends, my dad. They were everywhere. So often what I was actually inventing was the foreign, coveted idea of loneliness.

Snap! They would disappear. And I would be left in a silvery valley at twilight with wood nymphs, unicorns, sprites and orchids. In that lovely lonely land I never had to wear shoes or do math or watch my brothers. Rather I'd settle gracefully down in front of a library the size of a mountain, reading in the luxurious silence.

Even little girls, though, long for adventures in lieu of solitude sometimes. My own heart sent me spinning into one of my favorite past eras. I had my pick! The California Gold Rush, the Civil War, the Revolutionary War, the Great Depression, Plymouth Rock, World War II, the Roaring '20s. My choice was usually fairly arbitrary, often based on the most recent movie I'd watched.

So I'd pick the era, give my characters names, contrive a heroine, a villain, a goal and a hero. Maybe I should call him a co-hero, because with me at the helm there was never a guy 'who got the girl.' Instead there was usually a girl 'who got the guy.'

When configuring a man to be gotten, though, the mold from which he came was a complicated one: John Wayne, Jimmy Stewart's George Bailey, Harrison Ford's Indiana Jones, Bob Hope, Ronald Reagan, Robin Hood... the list goes on. After I'd imagined my Superman, I gave him a problem. It had to be a big one, exciting enough to revolve the story around, but it was nothing a good woman couldn't fix.

Playing my games alone made me powerful, though including the little boys in the neighborhood, inflicting my parameters on them gave me the same element of control. Sure we could play 'Cops and Robbers', but I was always the Chief of Police. Sure we could play 'Cowboys and Indians', but I was always the Chieftess of the Indian tribe. Sometimes I'd hear the peasants grumbling, but I never feared a real mutiny. In my imagination the boys loved to swim.

After all, I was the oldest and the most creative (not that I allowed anyone the chance to try and best me at the latter). At the drop of a hat magical names of far off locales danced off my tongue. I'd dub each boy with a new, more exciting name before the games began. Ryan became Gerard and Jim became Apollo. With the new name and the detailed history I endowed upon each of them, the boys grew into the man whose persona they had been gifted. By maintaining my position as Queen, in charge of gifting those names, I kept the ranks happy and always had a place to play.

Unfortunately my fun was never really maximized. I couldn't be Nancy Drew because I was the one who created the mystery. Hot clues were placed by me. I always knew the end. The same was true of any mystery. That's why I devoured books. Mysteries unraveled in front of me, and I sat very still so as not to disturb Nancy's process.

I crammed my mind with as many plots and characters as possible, and I felt the feelings of the protagonists in a deep, scarring, almost unnatural way. I was ashamed with Hester Prynne, and I was heartsick with Juliet. My heart broke with Travis' when we shot Old Yeller. When Jim hid in the apple barrel and overheard Long John Silver's treachery, I was huddled among the apples with him, just as horrified.

My dad often said I was hypersensitive. He chuckled when I cried over the little stuff, even in books. Reading the sequel to Gone With the Wind when I was fourteen was a bad idea. I sobbed my way through it, half because I longed for Rhett and Scarlet to work things out, and half because I had recently hit puberty.

That was the beginning of my southern belle phase. Though the ultimate tomboy at school and on the playground and on the basketball court, I changed once I got home. My metamorphosis was all in my mind, but I emerged a delicate, charismatic lady with a penchant for waltzes, parasols and fine china. I believed that buttermilk would rid me of my freckles. I hummed imagined slave songs, pensive and low, agonizingly simple, haunting. And I twirled in my pretend hoop skirts. I was Scarlet 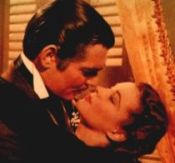 As usual I was drawn to the feisty, bull-headed main character, and was almost disdainful of her sweet, naive counterpart, Melanie. Not until many years later would I learn to appreciate Melly's kindness and humility. I never thought that Scarlet was justified in most of her choices, the ones that rocked the worlds of everyone around her. I wondered why, after everything, Rhett hung around as long as he did. Wicked was alluring. Not a new concept in fiction. But I wasn't wicked, not even a little bit.

I adopted orphans and cared for stray dogs (a giant Newfoundland named Saskatchewan was my favorite, recurring in my play). The wrongfully imprisoned patiently waited for me to set them free. Lofty dreams for a skinny, freckled girl in seventh or eighth grade. But that's what dreams are for. Slaves were given their independence and illiterate women in third world countries were taught to read. Those were my imaginings.