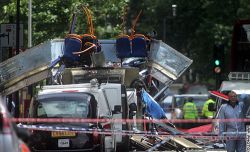 A deadly day has come. Evil infiltrated the London Underground and the London bus lines and detonated multiple explosive devices, killing more than 30 people and injuring hundreds more. Is this Britain's 9/11?
When our twin towers were so tragically toppled only four years ago, Tony Blair and his country stood staunchly behind us. Today our president got the chance to reciprocate.
In a statement condemning today's attacks, President Bush drew the battle lines once again. "The contrast couldn't be clearer between the intentions and the hearts of those of us who care deeply about human rights and human liberty and those who kill, those who have such evil in their heart that they will take the lives of innocent folks."

Many innocent people were murdered today. And I wouldn't be surprised if there were a few Muslims among the casualties, too. The perpetrators of this barbaric crime may honestly believe they are committing such acts in the name of their god... but their reasoning doesn't matter really. Feeding off the fear and pain of civilians is sadistic and wrong.

I pray that justice is done in the name of all the victims, that the leaders of the world can unify through this tragedy and pursue more efficiently and effectively the terrorists who seek to destroy our daily lives. Most of all, though, I pray that we who are not to blame can find peace in the idea that we are in the majority. Republicans and democrats, Christians and atheists, men and women, adults and children, every race, every creed, every color... we are what the Muslim extremists hate simply because we can live in relative harmony with one another, promoting respect and tolerance, maintaining our right to life, liberty and the pursuit of happiness.