Summer is so beautiful! Today I gazed out my window with Disney sitting on the sill. Birds took flight, catching the sunlight with their backs and wings. Everything was green with freedom and health. I love summer.
But, as a young woman I know that summer is finite, like life itself. I know that there is an end, just past August, to all this loveliness. My August hasn't quite begun yet. I think, on the grand scale, I must be at the beginning of my July. And that's a great place to be. Seeing days like this sends me back to a time when summer did seem eternal. I was legitimately surprised when school time came around again each September. Childlike oblivion. Bliss. 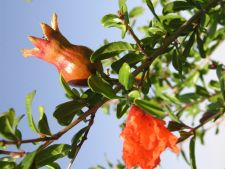 I've decided to include one of the most interesting and touching poems I've experienced in a long time. The Pomegranate is an insightful look at the mother-daughter relationship from the perspective of a mother who remembers what it was like to be a daughter. The legend she references in the beginning is found in both Greek and Roman mythology. Ceres, the mother, has made a literal deal with the devil to save her daughter, Persephone. By telling her tale from spherical and overlapping viewpoints, Boland rounds out a story brutal and gorgeous in its familiarity.

I love it. And it happens to be almost exactly what I've been feeling lately. Slightly burdened with new knowledge, new light that comes with age and marriage and experience. That burden is one that I know I can't give up, but it is also one from which I was spared for many years. My parents, loving me more deeply than I could begin to understand when I was a child, refused me some of the inevitable disenchantment that life offers later on. They'd felt it, coming to grips with death and anxiety, the stress of work and need for money, what true love really takes in order to succeed. In their success they could have prepared my brothers and me to face it all. Instead they chose, as good parents do, to give us "rifts in time"... the best gift of all. I don't feel betrayed. I feel loved.

I was lucky to be sheltered and cared for, lucky to br shielded from the weight of the world. Mom and Dad never explained to me just how the summer of my life would fade out into an autumn of age and ability. Instead they helped me to revel in the springtime of youth and eased me sweetly into the beginning of my summer. What a beautiful way to grow up! Anyway, this is a poem worthy of deep consideration. In the end it is hopeful... and that's like life, too.

The only legend I have ever loved is
the story of a daughter lost in hell.
And found and rescued there.
Love and blackmail are the gist of it.
Ceres and Persephone the names.
And the best thing about the legend is
I can enter it anywhere. And have.
As a child in exile in
a city of fogs and strange consonants,
I read it first and at first I was
an exiled child in the crackling dusk of
the underworld, the stars blighted. Later
I walked out in a summer twilight
searching for my daughter at bed-time.
When she came running I was ready
to make any bargain to keep her.
I carried her back past whitebeams
and wasps and honey-scented buddleias.
But I was Ceres then and I knew
winter was in store for every leaf
on every tree on that road.
Was inescapable for each one we passed.
And for me.
It is winter
and the stars are hidden.
I climb the stairs and stand where I can see
my child asleep beside her teen magazines,
her can of Coke, her plate of uncut fruit.
The pomegranate! How did I forget it?
She could have come home and been safe
and ended the story and all
our heart-broken searching but she reached
out a hand and plucked a pomegranate.
She put out her hand and pulled down
the French sound for apple and
the noise of stone and the proof
that even in the place of death,
at the heart of legend, in the midst
of rocks full of unshed tears
ready to be diamonds by the time
the story was told, a child can be
hungry. I could warn her. There is still a chance.
The rain is cold. The road is flint-coloured.
The suburb has cars and cable television.
The veiled stars are above ground.
It is another world. But what else
can a mother give her daughter but such
beautiful rifts in time?
If I defer the grief I will diminish the gift.
The legend will be hers as well as mine.
She will enter it. As I have.
She will wake up. She will hold
the papery flushed skin in her hand.
And to her lips. I will say nothing.