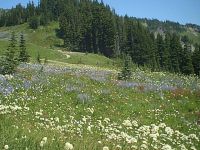 My English Literature class this quarter has moved into the life and works of William Butler Yeats (1865-1939). I'm a Yeats fan. What an incredible man. While looking again at some of his poems, I began to feel a new sense of identification. Yes, I've always enjoyed his style, finesse, and love of finding the perfect words. Yes, his imagery has always evoked beautiful pictures in my mind. But this time I really felt his deeper meaning. As a result I began to write my own poetry. It's been a while since I've felt so compelled.

At a time when the world was slowly disolving the authority and structure of Imperialist powers world-wide, Nationalism was growing in nations everywhere. Ireland was then being run by the United Kingdom and yet had very little say in the British Parliament; the people of Ireland longed for a sense of themselves and their country.

Yeats believed in the role of art as education, exposition and inspiration. While many of his predecessors had struggled with the social repercussions of publicly expressing one's own private thoughts and feelings, Yeats embraced that prospect and utilized it to unite his countrymen under the common hope for independence.

His ideal sense of Ireland seemed to be the untouched outer-reaches of the West, places very much removed from the commercialism and technology found in Dublin and London. In Yeats' quest for authenticity he studied folklore and Irish history.

Over the course of his life he performed many roles. Not only was he one of the most well-known poets and playwrites of his generation, Yeats founded the Irish Literary Society (1892) in the hopes of insighting a revolution of words and art. He traveled the world, spoke out against British imperialism, rioted in the streets with his fellow Irishmen, and was eventually a Senator of an Irish free state in 1922.

Today we went over several of his most famous works in class. One of his best known poems, "The Lake Isle of Innisfree", is one I've read and thought about many times before. But I learned something very interesting about it today. At the time he wrote the poem, Yeats had been reading Thoreau's Walden . And Walden remains the quintessential book about the rewards of solitude. Thoreau moved to a cabin in the Northeastern United States on Walden Pond, and there he postulated about everything, having all the time in the world to think. "Innisfree" (pronounced inn-ish-free ) was Yeats' response to that work:

The Lake Isle of Innisfree

I will arise and go now, and go to Innisfree,
And a small cabin build there, of clay and wattles made;
Nine bean rows will I have there, a hive for the honey bee,
And live alone in the bee-loud glade.

And I shall have some peace there, for peace comes dropping slow,
Dropping from the veils of the morning to where the cricket sings;
There midnight's all a glimmer, and noon a purple glow,
And evening full of the linnet's wings.

I will arise and go now, for always night and day
I hear lake water lapping with low sounds by the shore;
While I stand on the roadway, or on the pavements gray,
I hear it in the deep heart's core.

How beautiful. I think we all long for solitude sometimes. I know my dad does. And I can't think of anyone better suited for life in a cabin in the woods, far from the raging, swirling world. (But I also can't imagine how the rest of us would handle that same raging, swirling world without him. The needs of many... and so on and so forth.)

Anyway, I agree with Wordsworth, "the world is too much with us." Crass commercialism and the pressure to go through the right motions and steps towards a goal predetermined by everyone but ourselves has made us insensitive to the natural world. At least, that's how it is the majority of the time. Sometimes a few of us run frantically to the nearest government sanctioned National Park, praying it will still be as beautiful and fresh as it was the last time we were there. But the rest of the time we seem much too busy to appreciate those termed to be "the little things".

On days like today, a beautiful day in California, the smell of freshly cut grass or the sound of birds and sprinklers gets me thinking. Wouldn't it be nice to take the time to really let go? Anxiety plagues me when it comes to school. Driving driving driving fatigues me. And then there's work and chores and all the other daily demands, things I should just accept because everyone else does... that's part of being an "adult", right? Maybe. Today, though, with Yeats' steady, humming cadence flowing through my brain, I fancied my own hideaway.

Gazing around this summer place
and feeling feelings churning deep,
I consider the bees, leaves, and flowers,
and running away before it sours.
I'll take with me memories, all of the grace
and rest then in Eden to finally sleep.

For my faith is fading so fast
in life and after, God and truth.
Heroes are men who bleed and die,
and were once boys, sons who cried.
Escape calls clearly; the die is cast!
And I, too, yearn for the fountain of youth.

Grab my hand, Love, and come with me
away to somewhere of once I dreamed.
I miss the enchantment of infinite life.
Here I am standing, always your wife,
trusting and hoping, in spite of things
that are not as lovely as they once seemed.

We'll not lose our way, trust your guide.
The meadow there is real, green and low,
and in it hides a dappled fawn.
He waits there as his mother is gone.
Deep in this magical place we'll hide
with childlike faith and a love-happy glow.

(I realize the how presumptuous it is to place my poetry anywhere near Yeats' own. Just remember that I'm not competing... I'm responding.)