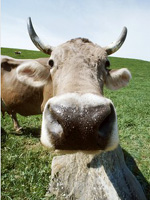 One afternoon not long after high school graduation, the Ya-Yas (Cindy and Amy) and I went on a drive. Our destination does not matter (it has since been forgotten, mostly because we never reached it anyway). The point is that Amy had donated a CD to our mini-adventure: Jerry Seinfeld LIVE.

Now, all three of us had enjoyed his show in the past, but I had never experienced his stand-up comedy. Let me tell you, I've never laughed that hard in my life. That's not a bad thing. I'm sure Jerry would be proud. But the problem was that I was driving at the time.

Yessirree. My 2001 green Honda Civic, the "Ya-Ya-mobile", had only one pilot. Me. (Cindy moved it from one spot to another in the church parking lot once, as a joke. Ha. Ha. Ha.) Anyway, I was driving, on the freeway no less. And in the midst of it all I had a coniption because Jerry had begun his diatribe about the elderly living in Florida.

And then of course he wanted to talk about the unnecessarily high maintainence of leather:

"Water ruins leather? Aren't cows outdoors a lot of the time? When it starts to rain do they all run up to the barn yellin', 'Let me in, man! I'm suede!'" Ohhhhh the three of us girls are lucky I maintained the wherewithall to take the nearest exit before doubling over.

So why am I thinking of suede? Well, I've never owned anything suede before. And today I changed all that. Thanks to my new job at Banana Republic in the local mall, and thanks to an OCD patient who bought and then returned a perfectly beautiful jacket (with a teensy little hole in the inner lining), I am now the proud owner of a lovely tan suede jacket! So soft, so classy.

It's not that nothing interesting happened to me today. At work I met a woman with hair that fell to just above her knees! I got whistled at by a guy at the mall. I had lunch with my mom at Red Robin (where they have the BEST banana milkshakes!). And I picked up my first paycheck in a really long time! Again, I did interesting stuff, but the suede jacket was the highlight.