If you can talk with crowds and keep your virtue,
Or walk with Kings--nor lose the common touch,
If neither foes nor loving friends can hurt you,
If all men count with you, but none too much;

I am a candidate for Chair and Vice Chair of Democrats Abroad Norway . If you're an American expat in Norway, I ask for your consideration and vote. You can read my candidate statement here . If you register with Democrats Abroad by 15 February 2017, you'll receive a ballot via email. Thank you! 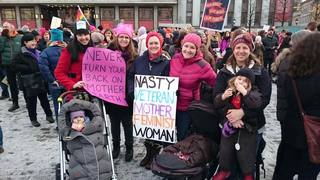 Last month, millions of women and our allies--people who love, respect and value us--rallied and marched in cities and towns around the world. Ask any one woman why she participated in the Women's March and you'll get a unique answer. We didn't agree on everything, but we do agree on this feminist principle: Women's rights are human rights.

Of course I showed up on a Saturday afternoon to remind the world that this is important. Of course I brought my husband and daughter. Of course I marched.

And, of course, there has been blow-back.

I understand a lot of it. People are indignant because they see this movement--the largest single populist demonstration in U.S. history--as a threat to the new President's agenda, which they support. People are offended by women dressed as vaginas or wearing "pussy hats." People are upset that pro-lifers were ostracized in some cities. And people are skeptical about what such a nebulous event accomplished or can accomplish in the long run.

This is part of my political philosophy that I want to wear right out in front:

We're too quick in our speed-dating, Snapchat, 140-character culture to divide along these lines. These things shouldn't be mutually exclusive. Understanding comes with intelligence and experience. It does not require agreement. And it does keep the conversation going. Open mindedness is not gullibility, but we often act like it is. Easier to shun the thing we don't understand than to sit down and ask questions about it. Discernment takes too long.

A friend of mine is a national park ranger. Garrett and I, in his words, "disagree fairly extensively." But his post on Inauguration Weekend and the Women's March is important to me. Not because we agree. We don't. But because his perspective is unique, and his sincere love of history and respect for our government are admirable. He makes good points in this piece about the procedures around peaceful protests and the way security works, how demonstrators step on their cause when they fail to clean up after themselves, etc. And he reminds us of history's long view on both the march and the presidential campaign that gave rise to it. Best of all, Garrett presents his perspective in a way that doesn't entrench him on a specific side, and he doesn't close off debate by rejecting opposition. On the contrary.

I believe the Women's March was a beautiful, proud moment of solidarity. At the same time , I cede all Garrett's points about respect for officers of the law and posted road closures and cleaning up. At the same time , I disagree with him about what the march accomplished. At the same time , I understand that the vague "mission" of the march could make people roll their eyes or throw up their hands. I stand strongly enough in my beliefs to listen to people who don't agree with me and to push forward with an open mind, ready to engage in a real dialogue.

I marched on that January Saturday knowing that President Trump was never going to be swayed by millions of women marching.

Unlike many of the marchers, I accept him as my president. I'm not happy about it, but I accept some responsibility for his being there. Only 26% of American citizens voted for the man, but he won. And all I did was donate money to the DNC, post scathing comments on social media, preach to the liberal choir, and try to avoid shouting matches with my conservative relatives. I could have done more, and next time I will. Meanwhile, I will respect the office of the president and our long-standing tradition of the peaceful transition of power.

I will do this, because it's what I asked those on the other side to do while Barack Obama was our president. Even if many of them did not behave thus, my principles stand, and I must abide by them.

I will resist the president's efforts to dial back the hands of progress any way I peacefully and meaningfully can. Not only on behalf of women, but on behalf of all vulnerable parties. That's feminism.

Lots of people have a difficult time with the moniker of feminism.

It's been co-opted too many times, both by angry groups of "man-bashing" women and by angry groups of threatened men in power. Feminism in the U.S. has become synonymous with its most negative context, and the majority of people seem to forget that the word and the mindset behind it are positive: the belief in and pursuit of human equality. The real success of the Women's March was that so many women of differing backgrounds and differing motivations and differing political priorities showed up at the same time and enjoyed one another's company.

I like the way Alicia Garza, cofounder of #BlackLivesMatter, puts it :

"I decided to challenge myself to be a part of something that isn't perfect, that doesn't articulate my values the way that I do and still show up, clear in my commitment, open and vulnerable to people who are new in their activism. I can be critical of white women and, at the same time, seek out and join with women, white and of color, who are awakening to the fact that all lives do not, in fact, matter, without compromising my dignity, my safety and radical politics."

We found common ground. This is victory. Even before real, more focused work begins on the kaleidoscopic fronts empowered marchers might move toward after the fact.

This definition of success is unsatisfying to some. Much like the Occupy Wall Street movement (of which I was critical), the platform and agenda of the Women's March seems too broad and vague. How do we calculate its success? How can we tell if it worked?

Measurable success for feminism as a world view is different. It begins with nearly 1% of the U.S. population finding terms--broad, vague terms about women's rights and solidarity--under which they can come together. And it continues in every smaller group that springs out of it, every individual engagement with our political process that goes beyond the easy vote. But these successes will be much harder to quantify. You will not get a clear agenda from the Women's March, because there could not be one while still allowing us all to move as one. However, I do believe you will now see clear actions. Possibly millions of them. From every corner.

I felt dismay and fear and disenchantment after Trump's election. My hope for positive change was reinvigorated by the march, and I can't be the only one. How do you measure the rising hope of more than 3 million American citizens? In my world, you can measure it by the proverbial fire in my belly. Next time, I will not be caught watching.

I am proud to have had friends marching in Seattle, San Francisco, Oakland, Los Angeles, Phoenix, Denver, Austin, D.C., Boston, New York, Calgary, London, Paris, and Sydney, to say nothing of my wonderful network here in Oslo. We showed up for our own reasons, but also just to stand side by side. Different but together. The way society works when it works.

Here is a selection from the official mission statement on the Women's March website:

"In the spirit of democracy and honoring the champions of human rights, dignity, and justice who have come before us, we join in diversity to show our presence in numbers too great to ignore. The Women's March on Washington will send a bold message to our new government on their first day in office, and to the world that women's rights are human rights. We stand together, recognizing that defending the most marginalized among us is defending all of us."

I marched with my fellow women and our allies to demonstrate for kindness and decency, to advocate for "the least of these." Of course I marched.

And now I'm going to act. This month, I'm running in an election of my own. I am a candidate for Chair/Vice Chair for Democrats Abroad Norway, my small bid to help affect the culture of my party. I have also joined multiple smaller action groups to oppose the worst of the President's policies and appointments. Next time, I won't be caught watching. Please wish me luck, friends. I'm excited about the next chapter.