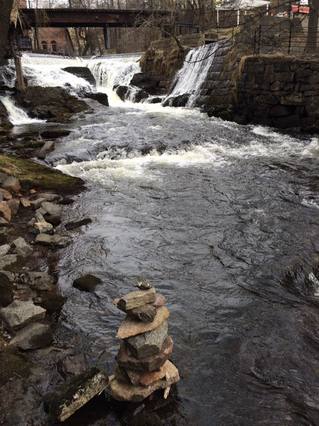 No single thought is more important than any other, at least at the outset.

The trees remain bare all over the city. From my chair on the third floor of the main library I can see across the city to the hills on the opposite side of the fjord, and it is all still black and gray and white. An overcast sky, mottled whites and grays, snagged by the lazy gray turns of seagulls. Spring is on the verge. Spring is tightly wound. Spring is kinetic. There is a paper cut on my thumb. The man beside me at the desk has neon green plugs stuffed deep into his ear canals to block out even the slight rufflings of pages, the scratch of pens, the gentle tapping of keyboards, the sniffing back of running noses, the gurgle of upturned water bottles, the muffled footsteps, the swish of closing doors, the whir of a distant printer, the whispered questions at the reference desk, the unzipping of backpacks. All white and gray noises--delightful sounds--of library life. The man with earplugs finds even these distracting. I don't envy him. And perhaps I am him, too. These sounds now populate this paragraph because I couldn't or wouldn't shut them out and focus on something else. But this is as it should be, perhaps, if I stick with my original thesis. In the moment, unguarded, open, no single thought is more important than any other.

My semester is drawing to a close. There are a few weeks left, but most of it will be dedicated to research and paper writing. Finals come in mid-May, but there's much to do before then. I find it easier now to sit someplace and focus on my assigned readings and writings. I find it easier to tap into that sacred vein where I keep my words and release them onto the page.

Honestly, I felt a bit dead. When I tried to read, the stuff--plot, philosophy--couldn't find purchase in my mind. It was like throwing undercooked spaghetti at the kitchen wall and watching it bounce stupidly and disappointingly to the floor. It was like trying to eat something delicious with a no taste buds. Ash in my mouth. Not for the first time since my daughter was born, I began to wonder whether I would ever be the same again. Whether it would always be this new, numb way. Dread came in a flood and sat there, a stagnant pool. When I moved, everything felt heavy. Heart, hands, head. But I kept trying. And there were, occasionally, shudders and sparks that reminded me of my old self.

It was Whitman that got the gears moving again. A bilge pump. "The young mother and the old mother comprehend me."

It was Hemingway that said, "Don't worry. You have always written before."

I have always written before. Now I write again. I can't tell you whether what I write or how I write will be different or harder or more necessary or less necessary. I can only move my fingers and release the caged bird of my mind. I trust Virginia Woolf, who allowed herself (her unnamed first-person character) ample time to meditate on a mark on the wall, and the Schroedinger's Cat-ness of that meditation, for as long as she did not rise from her desk to inspect the actual mark, it was simultaneously all of the things she imagined--head of a nail, scratch in the paint, rose petal--and also all of the metaphors and philosophical wanderings to which those things gave birth. She boarded the train of her own thought and rode. Her stream of consciousness wasn't Joyce's stream of consciousness, but it was valid, especially if not held up next to Joyce for inspection. Especially if one ignores Joyce completely. And Shakespeare. And every other preeminent author who built the original canon and then called it and all within it, exclusively, worthy.

In class, we were asked whether reading The Mark on the Wall was difficult, and many affirmed. I did not. Relieved. There was no ash in my mouth when I read it through the first, second, third time. No, rather, Woolf's stream is familiar to me. It is "a world which one could slice with one's thought as a fish slices the water with his fin." I am a fish. I am light and almost two dimensional in my efficiency and easily sustained as long as I keep to the water that nourishes me. I am also necessary to the survival of someone else.

The baby ate my mind. That's the short of it. I have breastfed her for a year now (exclusively for the first six months), and that part of our adventure together is drawing to a close.

In Norwegian, they have an expression: ammetåke . Breastfeeding fog. Let me tell you, the fog they're describing, at least in my case, was no pretty silver-furred animal, sitting on "little cat feet" overlooking a harbor. No, this was tule fog. Viciously thick. Moor fog, obscuring the bright, well-intentioned lights of home completely. Viscous and ashy and murky and terrible. I could remember nothing. I could barely access anything new. In front of a mirror, I couldn't recognize the contours of my own face.

If I have met you sometime in the last year, I apologize in advance of our next meeting, for I've likely forgotten your name. I apologize for the slick perspiration that has been on my upper lip and above my eyebrows. I apologize for my posture and for the way I sometimes sway like a lone pine atop a windy mountain, because I am used to having a baby in my arms or hefted on my hip, and movement keeps her calm. Keeps me calm. Keeps me calm. I apologize for talking about breastfeeding at odd moments. I know you didn't ask. It's just that the surreality of being food haunts my subconscious. You have your own set of quandaries in life; I have to make my peace with having been eaten alive. As well as with the Stockholm symptoms that remain. I'm unbelievably eager to have my body to myself again, and I am heartbroken at the thought of no longer sharing that precious, curled up, arterial connection with my child. It kills me to think about that last time, when it comes.

Then again, maybe I shouldn't be apologizing for any of these things. Women apologize too much in general. I'm the same. I know how the game of life is played, and there is a time and a place for everything, as determined by everyone who came before me. So I try to follow the rules. But sometimes the rules suck.

So, let's break them.

Whitman acknowledged "the mechanic's wife with her babe at her nipple/interceding for every person born."

No single thought is more important than any other, at least as the stream of consciousness flows. Heraclitus said one cannot step in the same river twice, but he never ranked the rivers. I'm letting the current take me, even if someone else doesn't think that's the most efficient way to write an academic thesis, or the most productive way to survive post-partum depression. This is an exercise in survival. The trees in Oslo in early April look dead, especially from afar. Black branches against a gray sky. Winter feels eternal. Dreadfully heavy and unbeatable. But there are buds at the end of every branch, and if I press my ear to the rough bark, I will hear the tick-tick-tick of a heart reluctantly at rest. Tick-tick-tick. A fuse burning down.