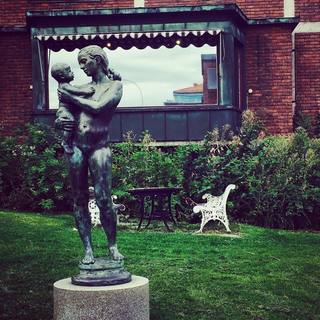 In one of the least explicable parts of early motherhood, I find that, after battling to get her down for yet another nap, and finally finding some peace and alone time, I spend some measurable amount of that priceless time flipping through photos and videos of the kid sleeping in the next room. As if I miss her. Which is true. This shocks me. It's like the way I miss her when I manage to get away for a quick, afternoon run--the way an astronaut's body must miss gravity while in space. I run in a loop, and I find myself picking up the pace to get back to her, even though my bondage to her was what I was running gratefully away from in the first place.

These days, the Hazelnut is more alert than ever. She bounces and wiggles when she wakes up and sees me. Being awake is her joy. As I hoist her from the crib and press my lips to her cheek, I am simultaneously overcome by two thoughts:

There's so much I won't miss about those first weeks. For example, how in the dark I was about why she was upset and how I might stop it. Attempting to problem-solve through the air-raid level of her wailing.

Actually, come to think of it, that's it. That's all I won't miss. I mean, I wouldn't want to go through the physical discomfort of labor or breaking in my breasts for nursing again, either, but other than that, it wasn't so dreadful. What I do miss is the general tininess of her. The crumpled, curled-up look of her. The dark eyes meeting the light in the room as if for the first time each day.

She is always making new sounds. The latest is a high-pitched peal that seems half sigh, half screech. She explores the bounds of her mouth with itself, sucking at nothing and pushing her tongue in behind her upper lip so that she looks like a little monkey. Every part of her seems to be moving unless she's asleep or leaning that way. I'm exhausted and I yearn for her to nap long and deep and without needing me.

Then, the second this happens, I begin watching videos captured after her last bottle of the day before--huge smiles and prolonged, happy noises--or of her twisting on the activity mat in a bid to roll over. Or, many weeks ago, swaddled and gazing uncomprehendingly into the camera's lens uttering the faintest, least intentional, most darling series of little coos. What a thrill that was, and how far we've both come since then. My heart cracks at this thought.

There's no going back. There's no again. From here on out, there is only new and different and forward and bigger and louder and more complex and more sophisticated.

That crack in my heart mends quickly under the balm of hope for the future--hopefulness being a byproduct of the mere presence of such unabashed and vital youth in our home every day--but there remains a scar. A hairline of glistening, slightly stretched skin. It joins the rest of the little splinter-sized heart scars: one for the first night we moved her out of our room; one for the first time Jonathan fed her with a bottle, and my breasts went disused; one for the first onesie she outgrew; the swaddle we discarded; the first time she seemed to recognize her name; the first time she looked for me when placed in the arms of a stranger. All these good milestones I prayed to come to pass. They hurt. And they are what make me want to run into her room and pull her close and breathe her in just the way she is now. Bottle the moment. Never let her go.