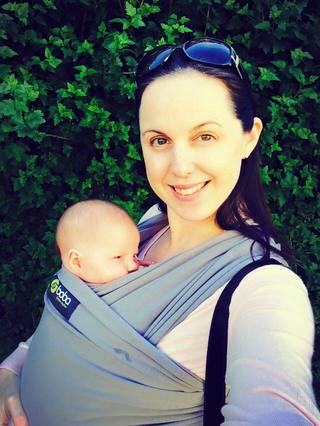 My husband took his standard two weeks off after the birth. (His Norwegian papapermisjon will begin in January.) My mom flew in from California for two weeks. While I fed and changed and comforted my wailing baby daughter, they fed and changed and comforted me. Then my mom flew home, and Jonathan returned to work. And there I was, with a tiny baby who seemed to cry endlessly, angrily, and inconsolably.

Here I have to state for the record that I am exaggerating. I didn't know it at the time, but the Hazelnut's crying was absolutely within the normal range. Maybe three or four hours total during the day in the beginning, and never consecutive. Any little thing would set her off, which made it seem endless; the sound she made--frantic, earsplitting--made her seem angry; the fact that Jonathan and I apparently sucked at consoling her made her seem inconsolable.

After eight weeks, I'm happy to report that both of us now have a repertoire of baby-comforting moves. Rocking, bouncing, shushing, swaddling, patting, pacifying, dancing, singing, swinging... No single thing always works. No single thing works two days in a row, in fact. But something works. Every time. It might take five minutes or an hour and a half. It might need to be combined with something else. But she calms and, eventually, goes to sleep. She's done it every day, multiple times a day, for the last two months. This is something we have to keep reminding ourselves of, especially on those days when she fights off her nap, and it seems that she may never ever ever ever ever sleep again.

Thankfully, in my neediness, I was never alone. I've managed to surround myself with strong, savvy, sensitive women in Oslo over the last four years, and many of them are mamas already. When I was at my most lost and confused in those first weeks, my friends came through for me. The following are three products, introduced to me by my mama friends, which have saved my sleepy, weepy self over and over. Gold, frankincense, and myrrh delivered to me by three wise women.

On one especially rocky Saturday, the Hazelnut stayed awake for fifteen straight hours. I didn't know newborns could do that. She was exhausted and on edge the whole day. Jonathan and I were beyond fried as the screamy time stretched into the evening. Along the way, I posted something about our mini-hell on Facebook, thinking I was being self-deprecating. I wanted to tell the "truth," while hiding just how hard it was actually hitting me.

When the doorbell rang after 9pm, Jonathan and I stopped and stared at each other. We were zombies. Unshowered, dressed in pajamas from the night before, with spit-up covered burp cloths draped over our shoulders. The Hazelnut was weeping madly into Jonathan's chest. I picked up the intercom phone.

My neighbor, my hero. Maddie swept into our home that night with hugs for me, an offer to babysit, a bottle of wine, chocolate, chips and salsa, and some advice. Carry the baby, she said. Strap her to your chest. Like a bomb , I thought.

But baby-carrying, especially in the first three months of her life, was something I'd always intended to do. It's just that neither of the carriers I had (ErgoBaby360, Sakura Ring Sling) could be employed fast enough or comfortably enough to be convenient.

It was Maddie who told me about the stretchy Boba Wrap. She'd donated hers to the Oslo Sling Library , but she urged me to borrow it. So easy, she promised. And the Hazelnut would sleep in it. And I'd get my hands back.

All this sounded too good to be true, but I attended the next Sling Library meet-up and tried the Boba. Immediately I was in love. Tying it on is already second nature to me, and it takes a simple knot. Because the material is stretchy, it will continue to accommodate my growing daughter for months. The Hazelnut sleeps long and hard in the sling, both in our home and out on walks.

This week, I stopped in at Bæreglede in St. Hanshaugen to buy my own. I use it every day. My hands are more often free. My heart is lighter. And I owe this to Maddie. 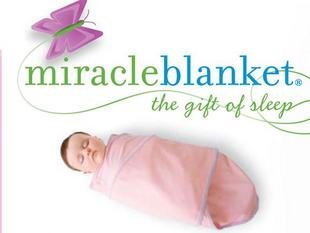 Our daughter needs to be swaddled in order to sleep. If we had a dollar for every time she slapped her own tiny face with her tiny, spazzy hands in that first month, we could afford to send her to grad school. So, we swaddled. Badly. We used big, stretchy, square receiving blankets. We consulted diagrams. We watched YouTube videos. Somehow, our little wiggler managed to free at least one arm every single night, sometimes multiple times. When my friend Zoe offered a solution, I think I knelt on the ground and stretched out my hands and whimpered, Please .

She brought us the Miracle Blanket she'd used with her own daughter, now five years old. Consisting of slick, soft material and a couple of strategic flaps, the Miracle Blanket is really a baby straightjacket. Which is precisely what we needed. Two quick folds, tuck the legs into their pouch, and wrap the tail of the blanket around the baby twice. Boom. Inescapable.

The first night we used the Miracle Blanket, the Hazelnut slept soundly for four hours at a stretch. We rejoiced and promptly bought two more Miracles. Each time I unswaddle my little girl now, especially after a deep, restful nap or a long overnight sleep, I thank the patron saint of desperately overtired parents for the inventors of the Miracle Blanket, and then I thank the gods of friendship for Zoe.

The Hazelnut wouldn't take a pacifier. When we tried to soothe her with a dummy, she rejected it. Oh, who am I kidding? When we tried to plug her scream-hole with a series of different pacifiers, our newborn child would gag, choke, spit, turn red, and, if possible, scream even louder than before. This reaction came mere seconds after we placed the thing in her mouth, and we panicked, plucking it out again and apologizing profusely for even attempting to make her cease and desist.

The "Soothie" pacifier was also a suggestion from Zoe, but the credit for its success in our home has to go to my friend Chelsea. On her first visit with the Hazelnut, she dispensed solidarity with me, snuggles for the Hazelnut, and one more extremely important thing: she taught the baby to take the pacifier.

"Do you trust me?" she asked before she began, even though I'd already pleaded with her to give it a try. She knew that I was squeamish, weak, overly quick to react to my child's crocodile cries. Chelsea's little boy is also school-aged, and I covet her wisdom openly, so I nodded.

The Soothie is designed to better fit the mouth of a newborn, targeting the roof of the mouth so as to appropriately activate the sucking reflex and mimicking the feel of the nipple. None of this seemed to matter to the Hazelnut. She fought and kicked and screamed and cried. Chelsea held her gently but firmly, rocking and shushing with a slow, consistent rhythm, and kept the Soothie in my infant's wailing mouth. I sat on the couch and tried not to tear my hair out. Those two minutes took forever.

And then she'd taken it.

That afternoon, my child fell asleep in Chelsea's arms, suckling contentedly on something other than me. It took the right pacifier and a practiced hand. My gratitude is endless.

Life is already far easier than it was. An impossibility without these three things and the three friends who gave them to me. The Hazelnut is also sleeping through the night consistently, though she still fights naptime pretty hard, which means I have to choose how to spend my limited "free" time, alternating between a shower, cleaning my house, feeding myself, and writing. Today I chose the latter. So, stand upwind if you see me.