I received a past due notice from the university library this week. I owe them 80 nok and a Norton Anthology of American Literature. The book has been sitting in our front hallway awaiting its return since last month, but I haven't been on campus since just before my birthday. It turns out that, even an easy pregnancy like mine is too taxing in the last month to make sitting behind a desk for four hours twice a week worth it. I miss being in school, but I'm happy with the reason.

My baby girl, my little Hazelnut, is due today. We discovered my pregnancy fairly early, at exactly four weeks, so this day has been a long time coming. At the same time, the pregnancy has moved smoothly, so my moments of real impatience have been few. I wanted to feel her sooner than I did (21 weeks). I wanted to start to "show" sooner than I did (26-ish weeks). And now... I want to meet her!

For a control freak, pregnancy can be especially strenuous. We can't control any of the aforementioned milestones. We have no idea how our labor and delivery will go. Instead, we dutifully watch what we eat and how much we exercise, and we read book after book about pregnancy and childbirth until we have at least a false sense of control on that issue. 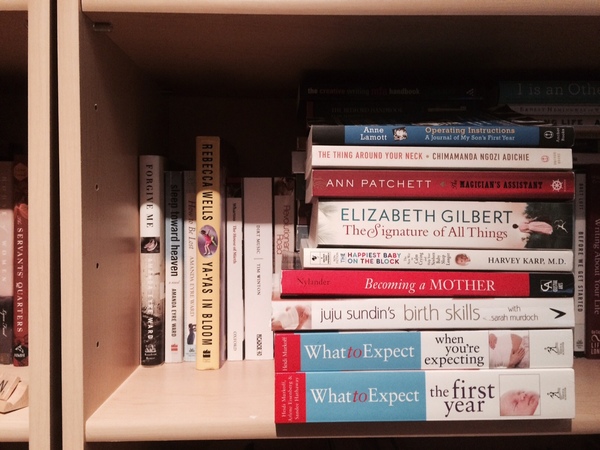 Here's the stack I've worked through over the last few months. My favorite was Becoming a Mother by Gro Nylander . I read the English translation of this Norwegian classic, and its reasonable, encouraging tone made me confident about motherhood. It's one of two books I'm bringing to the hospital with me. The other is Australian midwife Juju Sundin's Birth Skills , which has equipped me for labor. By that, of course, I mean that I understand that the pain I feel will be purposeful, and I hope this will alleviate my fight or flight reflexes and keep me calm. I also have a list of strategies to help me cope with the pain. Whether I will have the presence of mind to execute those strategies when the big day comes is anyone's guess. But still, a false sense of security is better than none at all in my world!

Beyond that, I found the two What to Expect books to be a little cliche, but the First Year edition should be a good reference. And I'm very pleased with The Happiest Baby on the Block by Dr. Harvey Karp . Here's hoping his fourth-trimester philosophy makes as much sense in concrete as it does in the pre-baby abstract.

Oh, and if you need some real-talk from a no-holds-barred mom, there's no better place to start than Anne Lamott's Operating Instructions . She succeeded and screwed up so many times that first year with her little son Sam, and she hides none of it. Because we fellow first time moms need to know how it's going to be:

It has been a terrible day. I'm afraid I'm going to have to let him go. He's an awful baby. I hate him. He's scum.

I'm not even remotely well enough to be a mother. That's what the problem is. Also, I don't think I like babies.

Sam loves the kitty more than anything else in life except for me and my breasts. On Valentine's Day we were in the kitchen and Sam was lying on the floor, and suddenly the cat came in and started rolling around on the floor near him, like some blowsy Swedish farm girl rolling around in the hay. Sam laughed for ten straight minutes. He sounded like a brook... So I got down on all fours to be near him. I stared at him and listened to him laugh, and said aloud, "Now where did you come from again?"

The Hazelnut is a very active little girl, swishing around and kicking hard almost constantly. My symptoms throughout the pregnancy have been blessedly limited, but I have been experiencing Braxton Hicks contractions consistently for several months. And now I'm rocking something unfortunately-but-accurately named "lighting crotch." We take long walks every day, hoping gravity will work its magic, and that magic--increased pressure on my cervix--manifests as electrical shocks through the groin and down my legs. Starbursts of pain at random intervals. If the Hazelnut were playing fair, she'd at least yell "Clear!" before each one. But no.

According to this Labor Probability Calculator , written by my friend Sarah Tyler Colon, I only had a 5.68% chance of going into spontaneous labor today. The odds of my delivering within the next week are 42.53%, though, so... fingers crossed! (And legs definitely uncrossed.)

The day is drawing to a close. The sunset was bright pink and scored by tangerine-colored contrails. After our walk to Aker Brygge, where we sat in the sunshine and ate a cone of hazelnut flavored ice cream, I queued up Anne of Green Gables. One of my all-time favorite films. I just had to. After all, the world lost Gilbert this week . Like so many of his fans, I was in the depths of despair.

Watching bright-eyed, red-haired, book-obsessed, imagination-fueled Anne find her family and grow up made me laugh and cry as it always does, but there was something new, too.

Standing at the train station watching Anne depart for college, stoic Marilla begins to break and says to Matthew, "It wasn't a mistake. It was providence. He knew we needed her."

Wish us luck! We'll be a family of three sometime in the next two weeks! (Oh, and I really ought to return that book...)