At some point during a blogger's pregnancy, it's obligatory, right? 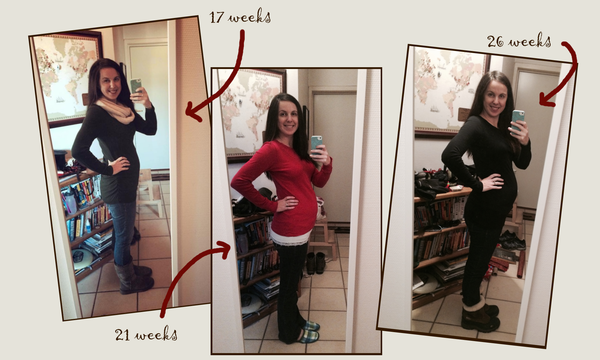 For so long, the Hazelnut was only with me. She was the shock and the blurry, happy numbness in my fingers as I held the positive pregnancy test. She was the raw, beautiful squeeze of a bear hug Jonathan gave me when I told him the news. She was a blinking set of pixels in the middle of a kidney bean shape on a screen at the 8-week ultrasound. She was on my mind. She was the exquisite curve of a forehead and shoulders bobbing and spinning at the 12-week ultrasound. Even after I shared the fact of her with our family and friends, she remained mostly my own. She was the galloping horse of a heartbeat on the doppler. She was the flexing arms and kicking legs and precious lips at the 18-week ultrasound. She was the tightness around my middle that required elastic-waisted jeans and belly bands.

Then, one day around week 20, she was a flutter. She was a vibration, a shudder, a spin, a tumble. She was a blink, a fidget, a bubble bursting, a breath against my skin. But still all inside. Still all mine.

From the outside, to the stranger on the street, I looked like the same girl I'd always been. Or maybe that same girl after recently enjoying a few too many pints of Ben & Jerry's Cookie Dough ice cream. Which is fine by me. The better shape I stay in now, the easier time I'll have regaining my previous shape after the birth. At least, that's what the books tell me. I can still zip up my parka without too much trouble, which is important as temperatures plummet, as they did around Christmas. That's the milestone I'm not looking forward to... losing that capability. Here's hoping we can make it to March first. Probably a pipe dream.

Only recently has the Hazelnut become a presence in the world, too. Something obvious. No more guessing. She gets noticed. I get congratulated. It's lovely. And I'm proud to wear her out in front of me. Better still is the way I now share her with Jonathan, as her kicks and turns have become, at least occasionally, unambigous and strong enough for him to feel with his hands.

This is as close as we'll ever be; it's as much control as I'll ever have. For the rest of my life, she'll only be drifting further and further from my side. Now, at least, I can move my palms over the rise of my own stomach and feel her there. My kid. That dandelion of potential. She's safe with me. All mine.

My third trimester begins in a week and a half, just after I start a second semester at the university. It's going to be a challenging few months for body, mind, and soul. Wish me luck!