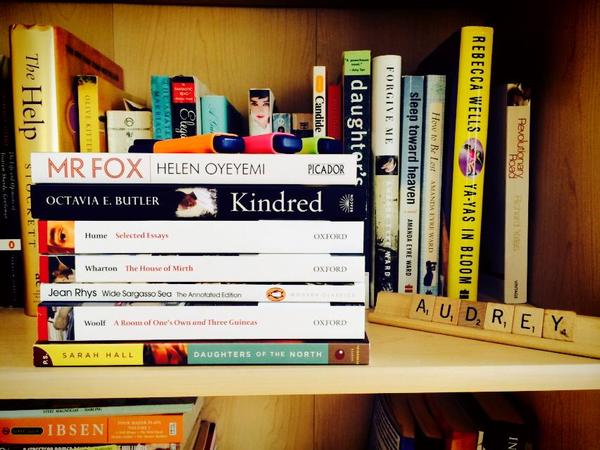 As I launch into the writing of my third and final term paper of the Høst 2014 semester, it occurs to me that I never did share my reading lists with you, my readers, many of whom like lists of books almost as you enjoy the actual reading of the books themselves. I'm like that, too. Reviewing a soundly curated book list is like taking an imagination break and walking the stacks of a library of the mind. So, I thought I'd post a couple of the lists here for your pleasure/edification. (Course descriptions have been cribbed from the UiO website .)

This is a course in English-language feminist fiction from the nineteenth and/or twentieth century. Students will study a selection of novels and/or short stories that focus on women's lives and reflect on what it means to be a woman and a feminist from various sexual, racial, class, and national perspectives. The course will consider the development and thematics of feminist fiction and its contribution to the development of new narrative techniques.

This was my favorite reading list of the semester, and not because I'm a raging feminist, either. I simple responded well to the variety of voices. Every book was unique and uniquely suited to the aspect of Women's Writing we discussed that week. Mr. Fox was, far and away, the strangest, but being the most contemporary, that didn't surprise me. A Room of One's Own was the book I couldn't believe I hadn't encountered prior to this course (having graduated with my B.A. in English from UC Davis in 2006 and my M.F.A. in Creative Writing from Lesley University in 2012). And Wide Sargasso Sea is the book I'm not recommending to people who tell me their favorite classic was Jane Eyre .

Time and money are two of the main forces that shape human ends. Our conception of time has a profound impact on how we understand ourselves, and on how we draw the boundary between the possible and the unreasonable. In a similar fashion, our collective understanding of money exerts a sharp influence on how we order our personal and communal lives. This course will examine these two forces through the lens of literature. It will use the reading and analysis of a select group of American novels as a way of interrogating the links between time, money, and literature.

In this course, we will examine the ways in which novels work to naturalize or challenge social conceptions of time and money. More importantly, we will consider all the ways in which the reading of novels helps us reflect on the nature of time and money, and we will think about the way these reflections are connected to issues of race, sexuality, subjectivity, and community.

Honestly, I think this course needs to be renamed. Time, Money & Race in the American Novel would have been spot on. These were challenging texts, all. The Octopus was exceedingly long, but beautiful, and it was a perfect fit for the class. The Quest of the Silver Fleece is the book that will stick with me longest, I think, and I enjoyed writing my final paper on it. Here I'll admit that I did not read Judgment Day . I was in California for the class discussion and had already selected a different text as my qualifying essay topic, so I gave myself a break. And between the surreal Cosmopolis and the enigmatic Gain , I'd have to say that this was the most eclectic class reading list I've ever encountered.

This course teaches you how to analyze and contextualize British and American political literature of the eighteenth and early nineteenth century: the Age of Revolution and Enlightenment. To a great extent, British and American political writings of this period spring out of a shared literary culture, and this course provides an opportunity to study keystones of political thinking from both sides of the Atlantic, including classic texts by David Hume, Thomas Jefferson, Thomas Paine, William Burke, James Madison, Mary Wollstonecraft, and others. While the primary texts on the syllabus will be subjected to close rhetorical and literary analysis, they will also be situated in their immediate historical context and understood in light of their reception in subsequent political discourses. A central concern is the ways in which political discourses in specific historical situations develop from a variety of literary traditions, including the civic humanism of the Florentine Renaissance, as well as from traditions of scientific and religious writing.

Here's what I'll say about this class: It was a good idea in theory. I enjoyed delving into the literature of men and women committed to furthering their own political ideals. Unfortunately, the syllbus and reading list were a bit ambitious for a 10-week course, and though I did make it through almost all of the reading, we only touched on about 70% of it in class. There were also a handful of textbooks assigned, meant to supplement these readings with historical context. But the attempt to shore up historical knowledge in a roomful of students focused on literature was a bit doomed from the start. We're curious people, of course; I adore learning about history, personally. Ultimately, there wasn't enough focus on the literature, and I wish I'd taken a different class, one that would have put me closer to determining my own thesis topic.

This was my first semester as a master's students in the English & American Literature program at the University of Oslo. It's been challenging, which is usually good. Challenge builds character. Discovering I was pregnant the week or two before classes began made things a lot more--um--interesting. I have registered for classes next semester, though my due date is in mid-April, so it's unlikely I'll complete the semester before the Hazelnut shows up. As it turned out, the Norwegian educational system is built to accommodate women desiring to study and start a family, so I'm not at all stressed about what this means for my degree. As long as I'm healthy, I'll stick with it.