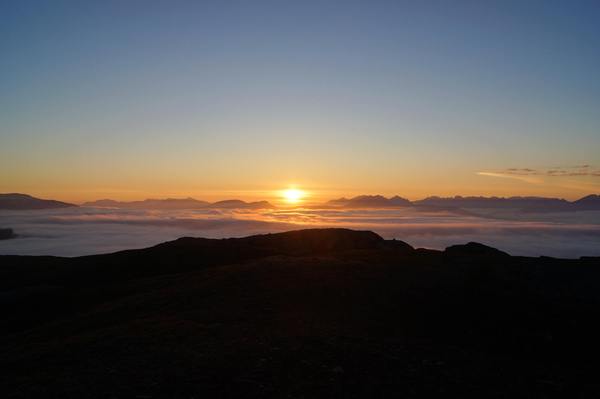 This morning the wrinkles of our sweatshirts smell like pipe smoke and DEET. We left the hytte at 20:30, slathered in bug spray so that our cheeks shone in the late sunlight. Stopping to watch fish rise in the river--just a slip of dark, shiny head above the sparkling surface, then rings expanding to the shore--we found ourselves surrounded by a cloud of insects.

They hovered and glowed in the light, whirring and bobbing. It took me a moment to realize they were mosquitos. Enormous mosquitos. Their terrifying blood-sucking apparatus long and curved and visible. They appeared more like hummingbirds than insects. Thankfully, the spray kept them at bay.

We walked on up the road to the turnoff just before Rundvatnet, then up another steep fire road to its end. There we found no trail, but our object was the North-facing ride of Ostre Omasvarri (654 m), an understated hunch of a hill in this region of sharp-peaked giants. We turned and wandered in to the forest of birch--widely set from one another and branchlessly white down low, a departure from the forests of our Sierra home--which happens to be excellent for off-trail tramping and bushwhacking. 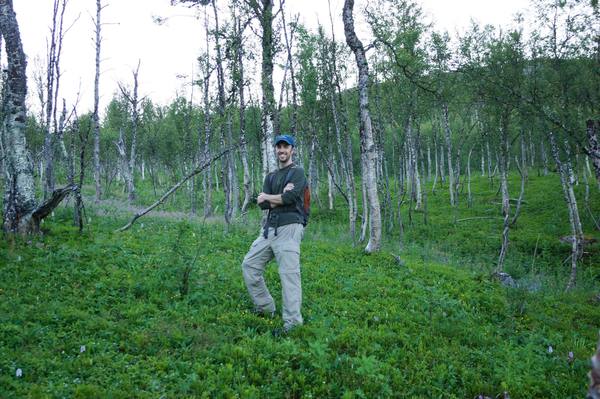 As we stomped through the lush underbrush, we marvelled at the varieties of ferns and flowers that swayed in our wake. Delicate fronds the color of sea foam. Buttercups and bluebells and lupine. Tall stalks of fuchsia flowers whose unbloomed buds looks like licks of pink flame. And everywhere green, green, green. The higher we climbed, the more it changed. 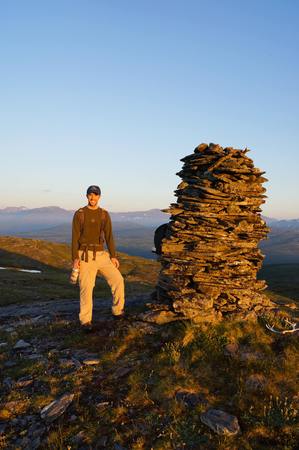 After an hour, we were clearing the treeline and walking on the spongey terrain we recognized from our trip to Lofoten last year: a conflagration of mosses and lichens and tightly knit, low-growing plants covering an immense field of ancient boulders. It bouyed our steps as we came to the crest.

Stilt-legged birds the size of small gulls called to one another from their sentinel points. Danger. Danger. It was 23:00 when we stepped back into sunlight. Blinded, we moved carefully to the highest point on the mountain, marked by a 10-ft tall cairn. All the while, we were followed by the same cloud of humming mosquitos, though with the altitude there had come a shift change. The night crew turned out to be smaller and less overtly frightening, but just as persistent as their bulky, daytime counterparts.

Jonathan lit his pipe and we contemplated the view. 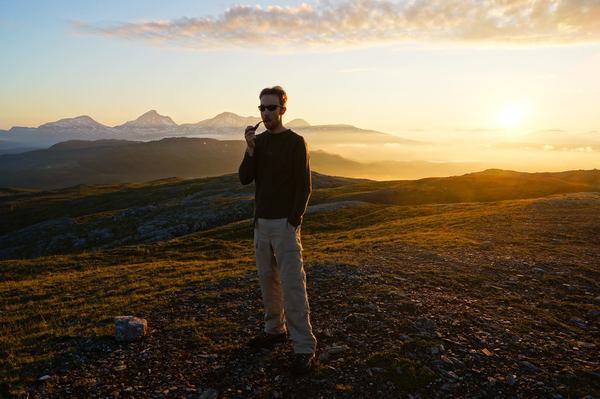 Three-hundred and sixty degrees of purple ridges, as sharp and pronounced as sharks' teeth. Snow patches on the faces to the southwest flared pinkly in the perpetual sunset. The valleys between us and the sun--low, but fully visible and going red under the northern sky--began to fill with fog, a sea of mist flowing in from the ocean we could not see.

As we snapped photos and cooked dinner on our little camp stove, we talked about the disorienting quality of a sunset which does not occur in the west, the achievement of signing a log book at the most northern point of our global travels, and our gratitude for the fragrant pipe smoke which was keeping at least a few of the less intrepid mosquitos away. 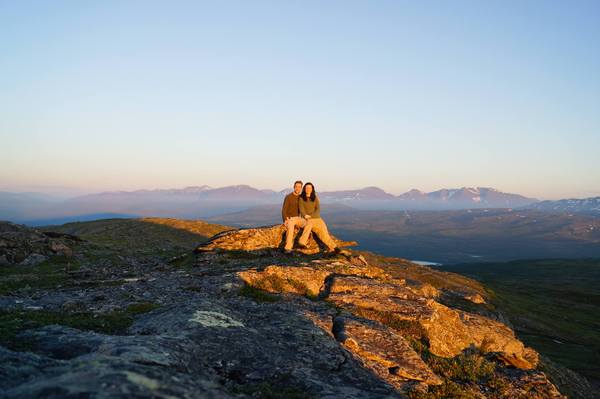 At midnight, we stood very still and silent, enjoying the red-orange glow--a sunset which was suddenly sunrise--and held hands. Then it was time to go home. 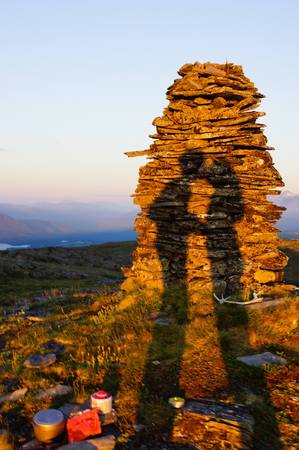 We made it down and back to the cabin in two hours. Passing the same way we'd come, but through a silvery morning mist near the lakes and streams. Our mosquito cloud dispersed in the chilly morning air. Brown and black speckled frogs squatted in the middle of the trail. While the smaller frogs made hasty, graceless escapes into clumps of nearby ferns, the larger ones froze in place, refusing to move or breathe, and we were forced to slow our descent so as not to accidentally crush one.

In the final miles, fatigued, our conversation wound between books, childhood, death, and linear algebra. And then we were home, back in our snug little hytte by 2:30. The sky still bright and pinkish blue, but this time with the dawn.