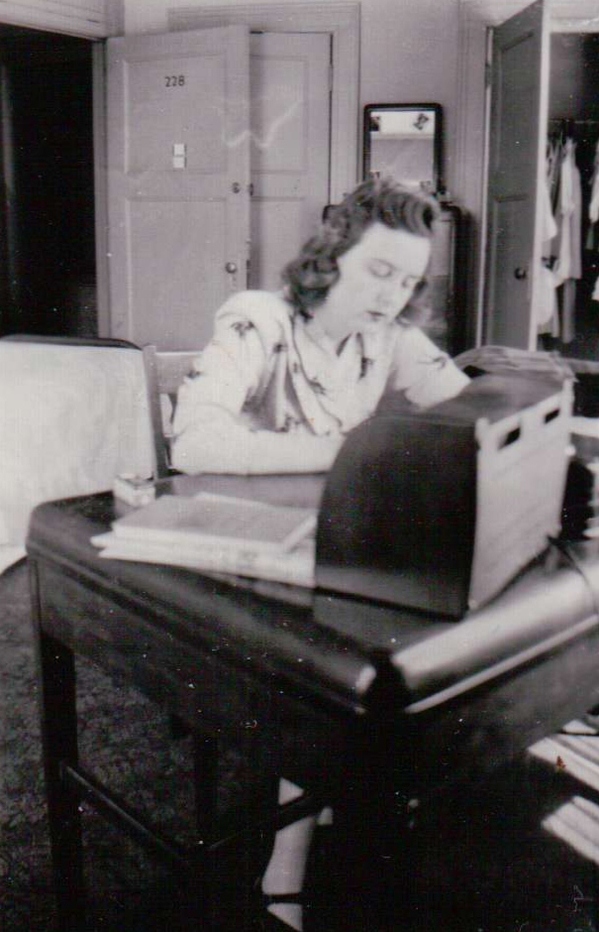 "There is no gate, no lock, no bolt that you can set upon the freedom of my mind." ― Virginia Woolf, A Room of One's Own

Dorothy Ann Pancoast (nee Bercher) was born in Cicero, Illinois in November of 1923. Her mother called her Dots. Cicero was a small town, and most people knew the Berchers because Dot's Uncle Frank was the mailman. The families in Dot's neighborhood grew their own vegetables and raised chickens, geese, ducks, and goats in their backyards. As a child growing up during the Great Depression, Dot was more aware of her family's circumstances than they realized. She knew not to ask for toys or treats or store-bought clothes. So long as there was food on the table, she knew her family was okay, better off than many others.

At night, Dot would lean on the window sill and stare out at the fluttering softness of two huge maple trees in her front yard, dreaming about becoming a beautiful woman. Later she would claim she never became beautiful, but determined quickly that she would be a very interesting old lady instead. I think she accomplished both.

My grandmother's college degree definitely set her apart. According to this study , there were only 530,000 American women enrolled in college in 1947. Less than 15% of the girls who graduated from high school went on to university at all. Dot was a trendsetter, as it turned out. Over the next 40 years, the number of women in college increased to 7.1 million (1988). Today, women vastly outnumber men in both their pursuit of higher education and the number of degrees and graduate degrees awarded every year.

I love seeing these photos of my grandma as a young woman, leaning over her typewriter or laughing with classmates, showing off her enviable calves. These are years we have in common, and our passions of the age are shared, as well. One of my most treasured possessions is an "English Romantic Poets" textbook which belonged to Dots at U of I. Her pencil-notes in the margins are so similar to my own. (She was fascinated by the young age of Keats when he was writing his most important works. She admired Wordsworth's contribution to the canon.) Before my grandmother was a wife or mother, she was a curious, intelligent, ambitious young woman with dreams of world travel and a career.

But back then, as was so often the case, Dot didn't have much chance to use her degree. She met my grandfather at the Electro-Motive office where she worked between her semesters at school. He was hard-working, friendly, handsome and dependable, and he loved her very much. In fact, he asked her to marry him several times before she finally said yes. On her wedding day in October of 1949, she wore a white, satin dress she sewed for herself.

This month I will begin pursuit of a second graduate degree: a Master of Arts in English and American Literature at the University of Oslo.

This morning I finished reading A Room of One's Own for the first time. In her most famous essay, Virginia Woolf talks about the history of women in relation to the writing of fiction. She delivered the essay as a series of lectures to the female students of Cambridge University's Newnham and Girton Colleges in 1928. Her message was creative, scathing, honest, and hopeful. At one point, she invoked the existence of "Shakespeare's sister," a bright, creative, poetic girl named Judith.

Woolf demonstrated how impossible it would have been for a girl like Judith to create anything like what her brother is so famous for, no matter how much literary genius she'd been born with. In the 16th century, girls weren't educated. They were betrothed and married off the moment puberty set in, usually to suitors selected by the girls' fathers based on some kind of material transaction. Women in the 16th century weren't allowed to travel unchaperoned or walk the streets of London alone at night. They couldn't find a mentor to help them learn a craft like acting. Rather, they stayed home, kept house, and bore children--lots and lots of children, as many as their bodies could stand--until they were old. Then they died. For a 16th century woman, this was a decent existence, a best-case scenario. Women who varied from this track were scolded, beaten, tossed out, used and ruined. Between all this, there wasn't time for creativity, let alone a foundation of knowledge and training to make it worth publishing for anyone to read or perform.

But things changed. Slowly and painfully and thanklessly. Over the next four hundred years, things changed. In 1928, when Woolf was speaking to the young, female scholars at Cambridge (whose colleges were vastly less equipped or funded than their male counterparts), women in England could vote, own property, and pursue higher education. They could marry for love and make their own living. It wasn't much, nor was it anything equal to what men had access to, but it was something. In the faces of these students, Woolf saw the history of all women burning brightly:

"I told you in the course of this paper that Shakespeare had a sister; but do not look for her in Sir Sidney Lee's life of the poet. She died young--alas, she never wrote a word. She lies buried where the omnibuses now stop, opposite the Elephant and Castle. Now my belief is that this poet who never wrote a word and was buried at the crossroads still lives. She lives in you and in me, and in many other women who are not here tonight, for they are washing up the dishes and putting the children to bed. But she lives; for great poets do not die; they are continuing presences; they need only the opportunity to walk among us in the flesh."

My memories of Dot are all of her as an interesting old lady. Of her penchant for large, colorful beaded necklaces. Of Scrabble tiles turned between her fingers. Of the plastic hood she wore on rainy days to keep her silvery curls from going flat. Of her softness, the extra skin pooling at her elbows, her wrists, her chin. Of her slow, tentative gait. Of her melodious, open-mouthed chortle and the way she dabbed her lips with a napkin between bites at dinner. This collection of memories shows her age.

But today I am thinking of her in vitality. Fire alight in her mind. When I run my hands over the faded blue cover of her English textbook, I know her unwrinkled fingers passed this way, too. Everything I learn and everything I write holds something of her in it, as well as something of my mother and her mother. Where I walk, they all--we all--walk together.