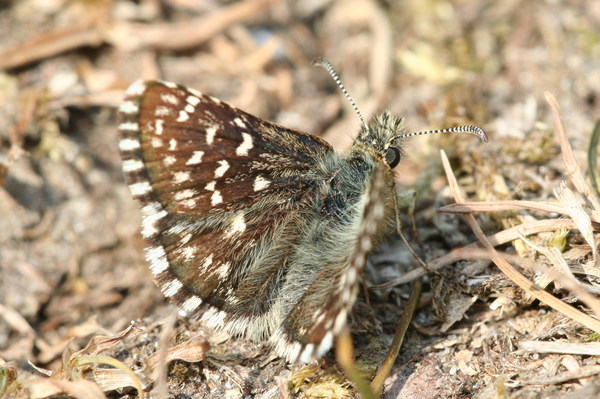 At a supermarket bakery in Bardufoss, Norway, Jonathan and I shared a baguette and waited for the pizza joint across the street to open at noon. The eating area at the Coop had quite a few tables inside. Older men chuckled and chatted in one corner, at a table which, I imagined, they've staked out for decades. I selected a table near the windows where we could people-watch.

A middle-aged man with shaggy blonde hair and glasses crossed the street toward the Coop. He wore a garish, oversized, Pac-Man sweater.

On the black, metal lip of the window before us, a moth the size of my thumbnail flapped in vain against the glass. His antennae tested the air, full of fresh bakery smells--yeast, butter, cardamom--and the damp closeness of strangers escaping a light rain.

As we ate and triple-checked the bus schedule, the moth struggled and fell. Struggled and fell. Over and over again he was defeated by the window. A hanging basket of pink flowers suspended from an exterior hook beside the market's sliding double doors seemed to be his objective.

Jonathan offered me the last bite.

The moth slumped over--like a sailboat taking on too much water--and lay on its side. Still, the antennae twitched, if half-heartedly.

"It's noon," Jonathan said, and began to gather our things. We had lunch to procure, two busses to catch, hytte keys to pick up from a Shell station at a tiny spot on the map labeled Overbygd, and a six kilometer walk down an unknown road to an unpowered, unplumbed cabin in the woods of Northern Norway. I yawned and rose from my chair.

The moth surprised us both by fighting to his feet at the same time and taking another leap up the glass.

I shouldered my bag and stepped toward the window. Gently but firmly, I pinched his speckled-mauve wings together, careful not to rub away the magical, fritillary powder, and lifted the tiny creature from the place where he had found himself marooned.

We walked like that, my other hand cupped protectively beneath the moth, who had surrendered to the unexpected lift entirely, through the Coop and to the exit. The market doors sighed and slid open. A rush of cool, rain-soaked air met us there, setting the basket of bright, pink flowers swaying. I placed him on an open flower. He stretched his wings against the petals. Wiggled his antennae. Tickled the velvet surface of this new place with delicate, black forelegs.

"And thus, a giant hand arrived in his darkest hour of need and carried him to the promised land," I said. An enormous kebab pizza steamed fragrantly between us on the table. "His belief in God now assured, he will spread forth the good news wherever his wings take him from here."