Maybe it's because I'm a writer, but I love it when life looks, smells, tastes, sounds, or feels like fiction. When I stumble upon something (or someone) so perfectly proportioned, so quizzical and memorable, that it couldn't be coincidence. Or fate. Or chance. Or anything true. No. When the hair rises on the back of my neck due to the poetry of a place, a name, or even a set of meteorological elements, it's because, had I found the same stuff between the pages of a book, I would be in awe of the craft of it. The intention of a creator. At random, these perfections in an imperfect world make me look up and say thank you.

I'm not making any sense, huh? Here's an example:

Yesterday, I was doing some research. My serendipitous journey began with an essay titled The Lives of Girls and Women: The Writing of Alice Munro . This essay, originally published by The Center for Fiction had been reprinted by the VIDA blog. It caught my eye because Alice Munro won this year's Nobel Prize for Literature, and while I have read and enjoyed one of her short story collections ( Runaway ), I'm curious to read more from and about this literary heavyweight.

The essay entertained and educated, as good essays are supposed to do. It also forced me to recalibrate my own thinking in a matter of just a few sentences:

"[Munro] is making a political point, one that's radical because it's so enormous and so unsettling. The point is that the lives of girls and women, even of those who lead narrow and constricted lives, those who wield no influence, who have a limited experience in the world, are just as significant and important as the lives of boys and men, those who take drugs, ride across the border, drift down the river or hunt whales."

This recalibration is what prompted me to look up the essay's author, Roxana Robinson . She's a successful novelist, and her most recent book, Sparta , is about a young American veteran returning from war in the Middle East. She is also the author of a Georgia O'Keefe biography. All this made me want to contact Ms. Robinson to request an interview with her for The Postmasters Podcast . Unfortunately, she didn't have any personal contact information listed on her website. What she did have was a small regiment of people set up between herself and me. A publicist, an agent, and someone who coordinates speaking events. I decided the publicist was most relevant to my goal, and that's when the magic happened.

Ms. Robinson's publicist is named Lottchen Shivers. Has there ever been a more perfect name? Strange and exotic and unforgettable. The name of a character in a novel with a leather binding. A delicate blue-gray pattern of lace on the inside cover panels. Lottchen Shivers.

Before I could address my correspondence, however, I had to deal with another element of the perfect name: its gender ambiguity. I knew it was probably a German name, and that the German word for girl is mädchen. It seemed likely to be a woman's name, then, but I didn't want to count on my pitiful knowledge of the German language to dictate my salutation to a stranger. So, I Googled Lottchen Shivers. After all, how many could there be?

The top result in Google was this: 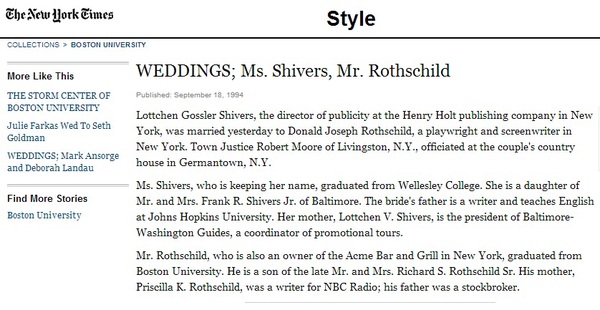 It was like that moment when the clouds part and the sun streams in and an off-screen chorus of angels hits a high note.

Lottchen Shivers is the daughter of a literature professor at Johns Hopkins University and the president of a D.C.-area touring company. She is the kind of woman who, in 1994, not only had her wedding announced in the New York Times, but also had resolved to keep her own name, and included that fact in the announcement. She has long been a woman of varied imperatives. She graduated from Wellesley, too. But what struck me most heavily, a resounding gong, was that Lottchen Shivers's mother's name was also Lottchen Shivers.

A woman named after her mother is unique. I don't know why. Plenty of men throughout history have been named after their fathers. It's a sign of respect, of love. A nod to the importance of the name being passed down. A heritage. These boys named after their fathers receive a suffix, too. A Jr. or a III, or sometimes even a IV. But this almost never happens for daughters. Maybe because passing your own name along to your child takes hubris, and women aren't supposed to have hubris. Or maybe because women enjoy the poem-making that is involved in the naming of a child. Perhaps Eve's penchant for christening things imaginatively remains hot in the female DNA. Whatever the case, this phenomenon is rare, and the two Lottchens made me look twice.

Derived from Old German, Lottchen is a version of Charlotte, and it translates to "free man", which is also fitting given the Feminist context of the trail my fingers walked across the keyboard yesterday. Lottchen Shivers is a name worth passing down. It's a name worth keeping even in the event of marriage.

All of these things came together for me. The dazzle of lights on a wall traced back through the prism into a single ray. And my gut said fiction, because the existence of Lottchen Shivers was too good to be true. She is a Scout Finch. An Elizabeth Bennett. An Antonia Shimerda.

She is also the Associate Director of Publicity at Farrar, Straus and Giroux .

I will concede that Lottchen Shivers is a real person, but I can't help allowing the prominent details of her history to strike my fancy. It inspires me in my quest to render and build characters who will resonate with readers this way. Little perfections in an imperfect world. Unique. Nuanced. Dreamy. Worth remembering.