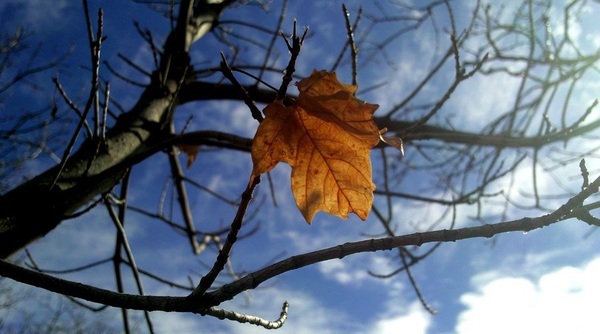 Someone must be last. That's the rule. And in my kingdom, this works out fine, because the last shall be first. Yet, this little leaf, now brown and curled around the edges, dampens even my spirits today. Perhaps it is the way it clings so hopefully to the branch. Well, last week, still surrounded on all sides by his family, his clinging might have been hopeful. Not so much now. Unflanked and exposed. His determination, then, brings me down a fraction of an inch. He won't give in to the turning of seasons--a process which has undergone more revolutions than anyone can count. Except me, of course.

Revolution: The act of rising up in defiance.

Each spring is something of a revolution, and even this last leaf has had his spring. That's the rule, too. I don't demand that the trees give up their leaves, all of them, at the close of the year. It's merely the way I built the machine. And the circumstances of spring--all noisy green, pushing up through the snow to hail the sun--seem like a victory. A resurrection. A thrilling surprise, at least for the new buds, the newly unscrolling leaves, green and emphatic. We live in spite of the death that came before!

But resurrections in my universe are also part of the plan. People were surprised by mine, you know. but make no mistake. What appeared a revolution embodied in a revived heart behind a stone was really ordained long ago. Back before there were springs at all, which is to say, back before there were winters.

And so, even this last leaf must fall.