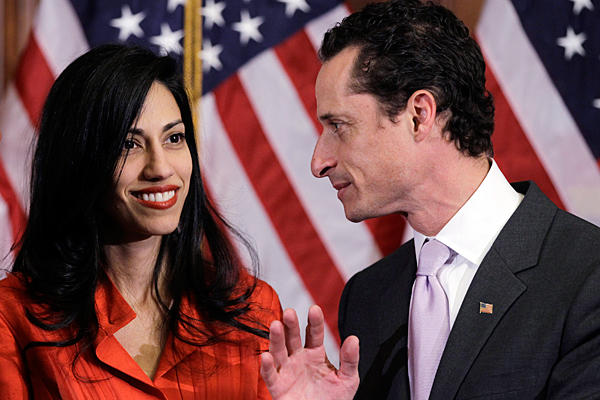 A man sins, breaks his vows, lies, gets caught, denies it all, gets confronted, confesses, apologizes, begs for forgiveness... and we judge him. Disgusting. Unworthy of the public trust. And his wife holds his hand. Forgives. Steps with him back out of the spotlight. Helps him repair his marriage. And his image. He stands up again, calls for attention, swears he's changed, improved. Credits his wife for her deep understanding, patience, mercy, and love. Nowadays, this is enough for the public to grant him that second chance we believe everyone deserves.

Then the man sins again.

Because, as a very wise friend of mine has said, "People can change; they just can't change a whole helluva lot."

That's not the easy part, though. It's human nature, sure. This is how we fail. Over and over and at our own weakest point. We recognize the pattern. It's predictable, but no, the failing part isn't easy.

What happens next is the breeze.

It's so easy. Anthony Weiner is a repulsive human being. His utter lack of self-control is revolting. He deserves every bad thing that will come his way because of his perverse need to share his genitals with strangers. He's like an animal. Like a dog. Well, that's not fair, actually, because dogs might lick themselves, but it's just their way. They don't know better. And they never vow not to do it. Loyal a dog may well be, but so few of them pledge their fidelity. Anthony Weiner is far, far worse than a dog.

And then, we condemn her.

No self-respecting woman would put up with a guy like this. Obviously, she has an ulterior motive. Like ambition. Or greed. She works for Hilary Clinton, so she drank that sad brand of Kool-Aid. Or else this is her fetish, too. She encourages it. And if none of those things, then she's got to be dumb. How stupid is she? Expecting him to change? What a pathetic excuse for a modern woman. She, too, deserves every bad thing that happens next. It'll serve her right.

Huma Abedin is well-regarded on the political stage for her intellect and coolness under pressure. She's cultured, educated, and determined. On top of all that, she's a vibrantly beautiful woman with an impeccable sense of style.

And she's a wife.

In sickness and in health.

It's so hard to remember that, even if Mr. Weiner disregards his marriage vows daily, according to the traditional view of marriage, Ms. Abedin isn't supposed to reciprocate. Her vows are supposed to stand.

When Anthony Weiner loses his mayoral campaign, he will announce his intention to lick his wounds in treatment for sex addiction. Predictable. And it's not hard for me to believe that sex addiction is real. At this point, given how much the man had to lose, and how keenly he must have felt that, I can't think of any way a healthy person would have continued participating in this grossly inappropriate behavior. It's just that his addiction stopped being a valid excuse the minute he chose to run for office again, knowing he would be putting his family through the hell of an identical scandal all over again.

But a vow is a vow whether your partner keeps his or not. That's unconditional love. In marriage, that's what's required of us.

For better or for worse.

I have an enormous amount of sympathy for Ms. Abedin. It's so easy for the public to condemn her now. She will be scrutinized, pitied, doubted, split wide open, consumed, laid to waste. For what? Choosing the wrong man? Millions of women do that. Repeatedly. Perhaps the way she embodies foolishness and love-blindness acts as a mirror--one of those horrible, cheap, department store mirrors under fluorescent lights--for the women who have made the same mistake. And the women who fear that the same mistake will one day befall them, too.

If behind every successful man is a great woman, then... behind every man fallen from grace is a woman who is guilty by proxy?

"I have no way of knowing whether Huma, for whom I have great respect, is responding out of new motherhood, the Stockholm syndrome or a mystery," Gloria Steinem, the feminist activist, wrote in an e-mail. "I strongly object to holding one spouse responsible for the other's acts. He's the one who should get out of the race."

I find it inconceivable that their marriage can survive a second blow like this one. But if it does, I promise right now not to second guess Ms. Abedin for her decision to stay. At the end of the day, it would simply mean that her respect for the institution of marriage and for the vows she took years ago is deeper than that of anyone who thinks she should cut and run.