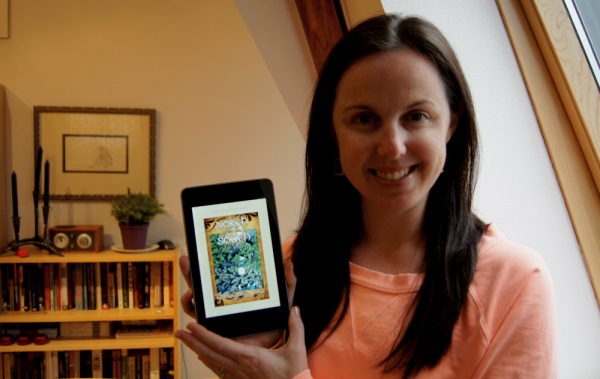 Kindle me! The digital edition of North of the Sun, South of the Moon: New Voices from Norway is available for download.

Now, I assure you that you'd be hard pressed to find someone who better appreciates small, independent booksellers than me. I can spend hours perusing, reading, paging, running my hands along the shelves of colorful bindings. There's nothing better than finding a bookshop with a diverse and thoughtfully indexed inventory, a knowledgeable staff, a section dedicated to local authors... all things which are only available and enjoyable face to face. I try to support such small businesses whenever possible.

But I can't deny that it's a profound pleasure to have a book which is, in part, authored by me now available on Amazon ! 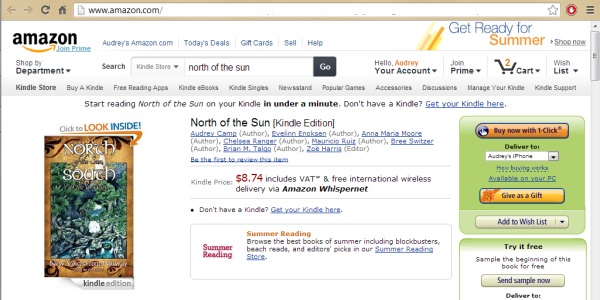 I blogged last week about the release of North of the Sun, South of the Moon: New Voices from Norway , an anthology of work by members of the Oslo International Writers Group . My essay, Orientation , appears between these digital pages. The following is an excerpt from the book's introduction, which I co-wrote with friend and fellow OIWG member Zoe Harris :

When the Oslo International Writers' Group (OIWG) formed in early 2012, the initial aim was camaraderie: to create a network of writers who could share and critique work, discuss writing as only writers can, and support one another in what can often be a rather lonely pursuit. Soon it became evident that the talent and ambition of this set of writers warranted a project, some kind of collective effort to showcase our work to the outside world. Pulling these short stories, essays, and poems together under a single flag was no simple task. It took more than a desire to help ourselves, or even to help each other. When someone suggested donating the profits to a charity, momentum truly began to build. Utdanningshjelpen is a Norwegian-based charity which fosters education and literacy in Kenya, Ethiopia, Ghana and Mozambique.

In this anthology, we have included stories of life's light--personal transformation, friendship, and love--as well as stories of life's darkness--political persecution, kidnapping, and death. The members of the OIWG hope that you find this collection to be a thought-provoking and deeply moving reading experience. And remember, just as we who live in Norway must, that even when the winter feels long, the summer sun will rise again and hang there in the sky, defiant and dazzling, as long as it possibly can.

The paperback will be available early next month, coinciding with the launch party at Cafe Fedora in Oslo. Tickets are still available, so join us for dinner, drinks and readings on Friday, 7 June!