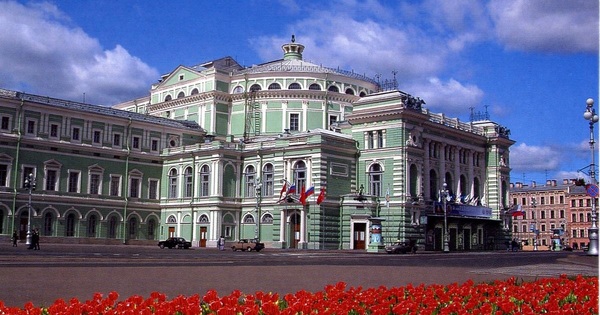 Sometimes I'm such a girl. When Jonathan asked me what I wanted to do for my 30th birthday, I told him the truth, even though it felt like a pipe dream. I wanted to attend a ballet at St. Petersburg's legendary Mariinsky Theatre . In my imagination, nothing could be more romantic. So, we made plane reservations (Norwegian Airlines flies directly from Oslo to St. Petersburg in two hours), obtained the necessary visas, and purchased tickets to the ballet. And I held my breath.

You know how it's totally possible to look forward to something so much, to put such a great deal of pressure on a single moment, that the reality can't help but fall short of your expectation? 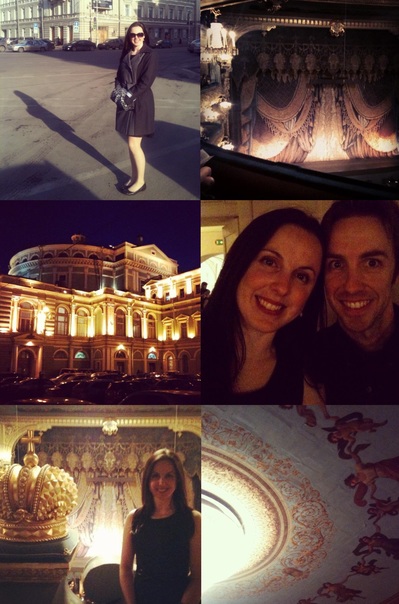 Twilight hung just above the city. The light layer of snow which powdered the streets and sidewalks that morning had melted away. Jonathan and I hurried down ul. Dekabristov from our hotel to the theatre, a walk of just over a mile. Around the last corner, we saw the green curves, glittering with gold lights, of the Mariinsky Theatre.

My handsome husband took my hand and we stepped into the lobby. The Mariinsky, often in the shadow of Moscow's Bolshoi Theatre, is exquisitely Russian: colorful and ornate. Like many of the sights we visited in the city, the theatre reminded me of a Fabergé egg : beautiful on the outside, but containing some secret gift, some magic within.

Our seats were in a semi-private box on the third level. A circle of smiling, dipping, whirling cherubs adorned the ceiling, backed by a delicate blue sky. We leaned in over the bar as the house lights fell.

The Fountain of Bakhchisarai (Бахчисарайский фонтан) is a ballet inspired by Russian poet Alexander Pushkin's epic poem of the same name. Pushkin penned the poem over three years, from 1821 to 1824. My undergraduate studies at UC Davis included the obligatory courses in 19th century poetry, and I loved it! But I never read Pushkin, the man who epitomized the so-called Golden Era of Russian Poetry. Before we boarded the plane to Russia, I found the poem online and immersed myself in its rhythms and story, to prepare myself for the ballet.

It opens at the Fountain of Tears on the Crimean Peninsula, in the palace of Khan Giray. The Khan is restless; the opulent pleasures of his court no longer satisfy him. Calling up his army, he invades the home of a wealthy Polish landowner, executes the men, and steals the beautiful Princess Maria. Once home again, he falls in love with his new conquest, and his love is so sincere, he cannot bring himself to sully her purity. He wants her to love him in return, and forsakes the rest of his harem in favor of Maria. The princess, though, brokenhearted over the murders of her father and her fiancé during the Khan's raid, cannot return his affection.

But the real drama comes when the harem meets Maria. Zarema, the Khan's former favorite, is consumed by jealousy. Once shunned, Zarema sneaks into Maria's private chamber (with wicked intentions), and confesses her true love for the Khan to her reluctant rival:

"Before the Khan with bosoms beating

We stood, timid my eyes I raised,

When suddenly our glances meeting,

I drank in rapture as I gazed;

He called me to him,--from that hour

We lived in bliss beyond the power

Of evil thought or wicked word,

The tongue of calumny unheard,

Princess, thou comest a captive here,

And all my joys are overthrown,

His soul possessed of thee alone,

My tears and sighs the traitor spurns;

No more his former thoughts, nor feeling

For me now cherishes Giray,

He from my presence hastes away.

Princess, I know the fault not thine

A suppliant wretch, nor spurn her prayer!

Daria Pavlenko , the prima ballerina, received a standing ovation the moment she stepped out in front of the heavy velvet curtains... before she'd pointed a toe, she brought down the house. As Zarema, her envy, her wrath, and her desperation were palpable even from high up in the mezzanine. Maria in all her purity, also a beautiful part to dance, paled in comparison to Zarema's passion.

Jonathan and I were captivated from start to finish. At one point, I gasped audibly! (I won't tell you when. No spoilers here!)

And when the ballet ended, once the soloists had received their bouquets of roses, we took our leave. My heart beat a little faster the rest of the night, spurred on by the ballerinas. Their strength, heart, flexibility, grace, and sumptuous costumes. But really, it was the Mariinsky which enamored me. Her 19th century architecture was elegant, but I think it was the history lingering in the halls which left me breathless. So much music, so many performances, so many legendary dancers. Now I'm a part of that history, too... one of so many enchanted fans.

I'll be blogging more about our colorful, exotic trip to St. Petersburg, Russia, of course. But if you can't wait... our full St. Petersburg gallery is posted here on Zenfolio.