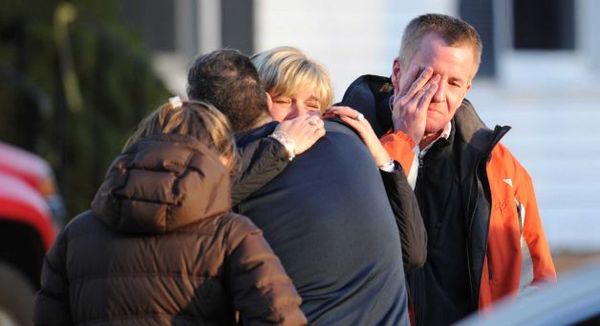 I've been accused of cowardice.

Yesterday, I reached out and told someone that I didn't agree with him. Not a shocker. We don't agree on much. But I also told him, via a Private Message (PM), that he ought to be more careful of the kinds of things he posts on Facebook.

This particular young man has a habit of libeling our President, of posting items about the gun control debate that can only be described as antagonistic, and of bullying people who don't agree with him. I've seen him attack the character and convictions of individuals and groups. These social media choices mirror his real life actions: he lives unapologetically. Which is to say, he steamrolls through his conversations with deaf ears and blind eyes... self-righteous to the point of recklessness... and it pisses off a lot of people.

In this case, he shared a Reuters article about the defeat of gun control legislation in the senate with just one comment: "WOOHOO!!!!!" Unfortunately, the thumbnail that accompanied this article was a portrait of distraught parents in the wake of the Newtown school massacre. I doubt he selected this photo intentionally, but it was still insensitive. At best. In fact, after the correspondence that ensued in the wake of that post, I wouldn't put it past the guy to choose precisely that photo. You'll see what I mean in a minute.

I did not air these grievances on his Facebook timeline publicly because I have, heretofore, held him in some esteem. He served in the United States military, for one thing. As the sister, cousin, and granddaughter of American veterans, that fact goes a long way with me. He also married one of the most intelligent, capable, warm women I've ever had the privilege to call my friend. Besides that, he's a loving father, and he claims to love and serve the same God I do.

All of this is why I tried to keep the dialogue civilized and productive by sending him the following PM:

"Seeing your victory shout next to the faces of people mourning the loss of children to gun violence made me feel ill... You are entitled to defend a snippet of the 2nd Amendment as though it were scripture. That's your inarguable 1st Amendment right. But when you take your viewpoint to the level you do sometimes in this forum, it does look like you're doing a touchdown dance in the end zone... completely disregarding the grief of Newtown parents and the people who sympathize with them.

"We can be friends without agreeing on guns, but common decency, while not spelled-out by our Constitution, is something all of us should consider when we decide to hold our ground. Whether you like it or not, you are in the minority when you say you don't want further restrictions on background checks or online gun sales or the sale of high-capacity magazines, etc.

"I'm not asking you not to have a voice. Hell, I keep lines of communication open with my more conservative friends in a conscious effort to stay apprised of both sides of each story. But I am asking you to think of the way your posts appear. It's difficult to respect the viewpoint of those who consistently make inflammatory Facebook posts which only serve to ingratiate themselves with those who already agree, while alienating those who don't."

Here is his response, posted publicly:

"Minus your sarcasm.. And clear lack of courage to speak your mind in a public forum by sending me a PM with your true opinion.. I'll just say.. Damn straight. Oh.. And in response to your direct quote of Messiah Obama.. I'm definitely "spiking the football" Victory for liberty is something to dance for.. As I witnessed myself with people literally dancing in the streets of Iraq on January 30th, 2005 waving their inked fingers over their heads."

Only this man would mistake a friendly reminder of personal accountability (something we Christians are Biblically called to do for one another), respectfully offered out of the public eye, as a "clear lack of courage." And only he would have the audacity to compare the defeat of a gun control bill in the United States, one which the majority of people wanted to pass, with Iraq's first free democratic election since the ousting of Saddam Hussein. His pridefulness taints most interactions I've witnessed between him and those who don't agree with him on Facebook, and I suspect this holds true of his face-to-face encounters, as well. This, unfortunately, was no exception.

The man didn't hear a word I said. Which serves me right, really. What did I think?

That he would address the issue at hand? That he'd accept responsibility for the pain his carelessness could cause others? That he'd agree it's possible for a digital dialogue via social media to contribute something substantive to the process, rather than digressing into petty squabbles?

Yes, I wanted to believe all of those things would happen.

There's nothing more insufferable than a blowhard and a bully, and, again unfortunately for him, there are few people less successful in winning hearts and minds.

Where does that leave me? Down at least one Facebook friend. Possibly more.

But if this means that my news feed is less cluttered by the trollish postings of people intent on contributing only their bluster and volume to what could and should be an earnest debate, then I think I'm better off. Because I think change can be synonymous with progress. Because I believe Christians and Muslims and Jews and Hindus and Buddhists and Atheists and Agnostics can coexist. Because I'm grateful that the people of Boston and Cambridge and Watertown remained safely in their homes, rather than yanking guns from home lockers and forming a posse. Because, at the end of the day, consistent humility is far more admirable than consistent pride. Because I do my best to offer my respect even before it's been earned by a stranger, but a true friend will prove himself worthy of that respect over time. And that certainly didn't happen here.

Posted in memory of the 11 students and 1 teacher who were murdered at Columbine High School 14 years ago, on 20 April, 1999.