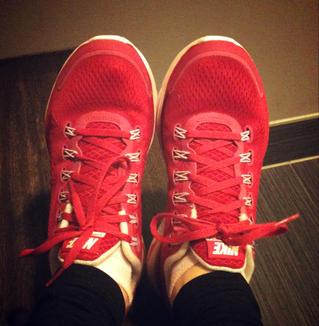 My running shoes are neon pink.

This morning, I laced them up and stepped onto the treadmill at my gym, just as I have many mornings in the last few weeks. And I ran.

I ran toward the glossy faces of the broadcasters on CNN and the BBC as they told the story. Two bombs exploded in quick succession near the finish line of the Boston Marathon , yesterday. At least three are dead. At least 144 are injured. Critical injuries include amputated limbs. Among the fatalities is an eight-year-old boy from Dorchester.

Yesterday, I was watching the live stream of the Boston Marathon as the elite runners churned through the miles between the halfway point and the finish. I was watching as Yolanda Beatriz Caballero Pérez of Columbia pulled ahead of the women's lead pack by more than thirty seconds.

A year older than me, Caballero looked strong and fluid, pumping along at a blistering pace (at Mile 12, her split was 5:26). The announcers ran through the details of Caballero's life as she ran straight toward the camera. Last year, she lost her husband of five years to a stroke. He'd been her best friend, her true love, and her running coach, taking her from a daily jogger to a marathon champion. Last year, she placed 8th at the Boston Marathon and earned a selection for the Summer 2012 Olympic Games.

After a couple more miles, I watched as Caballero was overtaken by Portugal's Ana Dulce Felix, her long, blond ponytail swishing in time with her stride.

Already, I was looking forward to my next day's workout, inspired by these incredible lady athletes who make it clear what the human body is capable of.

Once the elites had crossed the finish line, I stopped checking the Boston Marathon Twitter feed . We had a birthday to celebrate. While thousands of people continued to run from Hopkinton to Boston, I sang Happy Birthday to Jonathan and carried his angel food cake into the living room. The candles wavered. He made a wish and blew them out.

Just about then, there was blood in the streets of Boston.

President Obama has warned against jumping to conclusions, but promises that whomever is responsible, be it an individual or a group, they will feel "the full weight" of justice.

Detonated for maximum carnage, the "crude devices" placed among the crowds at the finish were timed to coincide with the moment that the most runners would be crossing the finish or arriving in the last miles. Thus, we are reminded of the evil which human beings are also capable of.

Could there be anything more sadistic than cutting off a runner at the knees?

On the treadmill this morning, I saw the video footage for the first time. A fireball and a smoke billow and runners falling and people screaming. The smoke consumed a row of flags from the 50 countries represented in the race that day. Norway's waved somewhere in the middle. I wanted to cry.

But that's what they want. The ones who placed the bombs. My tears thrill them. Blood, funerals, running shoes left empty and disused by the front door... all these things give them a perverse sense of victory.

Instead, I reached out and punched the buttons on the treadmill to increase my speed. Faster and faster. Until I was flying nowhere, until my breath couldn't come fast enough for me to cry. There was a hot ball of fire in my chest, and not because I was raising my heart rate to an unhealthy level, but because I felt simultaneously enraged and impotent.

The people who perpetrated this crime miscalculated.

Is there anyone better equipped to overcome impossible odds than a marathon runner?

Some of the victims of yesterday's bombings were athletes. They'd trained for months, rising early, staying out on the road for hours at a time. They'd modified their diets, their schedules. They have ignored pain and put themselves through month after month of drills, all in the interest of striving for the combined goals of fitness and a finish line.

Imagine what these men and women will be capable of when the thing they must strive for is survival.

I suspect many more of those injured were spectators. But even if they weren't in prime condition, they remain to be the kind of people who would show up to cheer others on. The kind of people who believe in the indomitability of the human spirit. Twenty-six point two miles? It's a goliath distance for the average mortal. But everyone waving a flag or a poster or ringing bells along the sidelines knew it was possible, and they wanted to be a part of the beautiful, peaceful thing that is the marathon.

Every one of the survivors knows what it means to fight, and what it takes to win.

Since the race was established in 1897, the Boston Marathon has grown increasingly exclusive. This exclusivity was meant to keep the crowds down, but it has only enhanced the appeal for distance runners. It's a holy grail. And because I know my country and my countrymen, I would bet the farm and then some that the status of this race will only grow from here. There will be new symbolism weighing heavy on the hearts and thighs of those who make it 20 miles only to have to crush Heartbreak Hill .

They'll do it. Not only the crop of elite runners from all over the world, but the tens of thousands of Boston hopefuls who drive themselves to the brink just to qualify every year. And joggers like me who can barely complete a 5K. And people who have overcome injuries and disease and the loss of those they love. And born runners. And people raising money to help others. Yes, we will all do it. Why?

For the same reason I put on my hot pink shoes this morning... because I know what the bombers wanted to accomplish yesterday and, to quote one of my favorite fictional Bostonians, Will Hunting :

"Because fuck them, that's why."

Something good: Civilian Response at the Boston Marathon Show the Very Best of Human Nature

"Within hours, thousands of people from all around the Boston area had offered spare rooms and sofas to people who had evacuated the downtown area. A Google document created by members of the public and accessible online was full of phone numbers, addresses and offers of warm beds. Huge numbers offered to drive into the city to collect evacuees and provide comfort in the face of desolation.

"Dozens of runners didn't stop running when they saw the explosions. Many went straight from the Marathon to local hospitals to give blood for life-saving transfusions, or ran towards the site of the explosion to help the injured.

"Over 50 countries were represented in the Marathon. In some of the pictures you can see the flags of dozens of nations lining the end of the course. The ethos of the Boston Marathon was community, camaraderie, human endurance and caring."