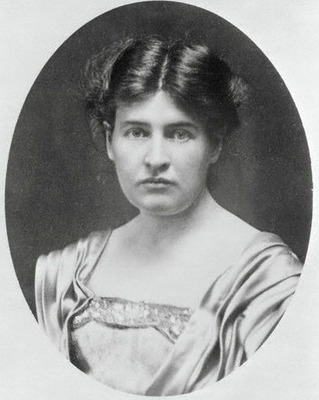 Before Willa Cather died in 1947, she specifically requested that none of her personal correspondence ever be published or even quoted from. Executors of her estate have adhered to that personal request ever since. Until now. Roughly 500 of Cather's estimated 3,000 letters will be published shortly , and are set to answer long-time questions about Cather's life, including her sexuality and her literary relationships. I'm fascinated, but conflicted.

Reading the personal correspondence of writers I admire is always a treat. It's a raw look at their personalities and belief systems. It's a chance to see something closer to a first draft. Without editors or publishers or even an audience to worry about, how does Hemingway think? How does O'Connor express her emotions? To say nothing of revelations about characters and stories limited to the public by the words The End. Fans want to know whether somewhere, deep in the gray matter, their favorites live on.

This blog and the girl behind it are part of an exhibitionist culture which has only grown over the last decade, fueled by Facebook and Twitter.

Then there are my personal favorites: Status updates and photos of failed attempts at potty training.

I unfollowed my favorite professional athlete the other day because her younger son didn't make it to his potty on time, and all 126,000 followers got to see the result. We're talking number two. When I peruse my news feed, I don't want to hear about (or see!) other people's adventures with excrement. Either from their animals or their little children. Unlike.

I imagine that young mothers out there, feeling isolated and overwhelmed by the task at hand, are probably thrilled to see that the anti-glamour of child rearing affects everyone, including celebrities with washboard abs and two Olympic gold medals. Maybe one of her other 120,000 followers was having an exceptionally rough day. Kid wouldn't nap. Wouldn't eat. A pile of wet sheets was stinking up the laundry room. And that person needed to log into Facebook and see that she wasn't actually alone.

For centuries, societal taboos have made certain topics difficult to learn about, even between friends. Sex, yes. Menstruation. I once spent two hours in a public restroom calming a girl whose own mother hadn't bothered to explain what it would mean when the blood started coming. As a teenager, I was told never to leave any evidence of my monthly period exposed for the world to see. This meant covering up the trash with extra toilet paper, for example, so that tampon wrappers weren't visible to those who used the downstairs bathroom. Nice, right? Also childbirth. In fact, it occurs to me that so much of the stifled dialog has centered on women's bodies, the changes they go through, and the wondrous things they can survive.

So, I cannot in good conscience tell any woman not to post whatever she wants on the Internet. But I also get to choose whom I follow and which updates I see.

I also maintain full ownership over what I post.

Last year, two of Fred Phelps' granddaughters finally rejected their grandfather's shameful, bigoted teachings at Westboro Baptist Church in Kansas . They were shunned by their families and forced to move thousands of miles from the only place they'd ever called home. I read Megan Phelps-Roper's statement about their choice to begin life anew and it struck me right away how tough it's going to be for her ever to be seen by the world as separate from WBC. To open, she quoted one of the Batman movies:

"There's no fresh start in today's world. Any twelve-year-old with a cell phone could find out what you did. Everything we do is collated and quantified. Everything sticks."

She goes on to say:

"Up until now, our names have been synonymous with 'God Hates Fags.' Any twelve-year-old with a cell phone could find out what we did. We hope... that the changes we make in our lives will speak for themselves."

My favorite beach volleyballer will forever be culpable for posting pictures of her son's feces on the bathroom floor. Megan Phelps-Roper's list of crimes against society, all protected by our First Amendment, include picketing the funerals of soldiers who died in Iraq and Afghanistan, holding signs like the one she mentions, above. At WBC, children as young as five and six commit these same acts every week outside other churches in their community, too. In a BBC documentary about Westboro Baptist Church , I watched Ms. Phelps-Roper laugh and dance and sing... all about everyone else rotting in hell.

For Ms. Phelps-Roper, I don't know what kind of an escape there will be. I suspect an incomplete one. People aren't the most forgiving lot.

According to the New York Times , Willa Cather's letters aren't steamy or subversive, but they do reveal that she "was a powerfully engaged literary businesswoman who corresponded with H. L. Mencken, F. Scott Fitzgerald and other notables of the day... [and] they do make clear that Cather's primary emotional attachments were to women." Ms. Cather's desire to keep her correspondence private seems to come from her hope that she would be known to future generations for her books alone.

A prerogative unavailable to most modern day authors. One may only remain anonymous while unsuccessful. But while failing to "succeed," authors are also human beings. Updating statuses. Posting photos. Tweeting things like:

@audreycamp : Pretty sure my printer just gave me the finger. This is how I feel about it. Cat vs Printer: http://youtu.be/CSK1D3bZhRs #video

Ms. Cather valued her privacy so much she was willing to place post-humous restrictions on her personal correspondence... letters which, except for her notoriety, would have been kept secret anyway. Does our right to privacy end when we die? The executors of Ms. Cather's estate, beginning with her companion of nearly 40 years, Edith Lewis and followed by her own descendants, have all defended Ms. Cather's privacy in the 65 years since her death. But now the ban has been lifted. Should it be?

Imagine the sound the stones must have made in 1922 as the workers pried them apart, opening King Tut 's tomb for the first time since the dead boy king was sealed inside in 1323 BC. Imagine the dust and the stale air, the shouts of triumph and the heavy breathing of the sweat-stained laborers. Imagine the way Howard Carter and George Herbert must have ducked their heads and hoisted torches and descended into the burial chamber.

But we more than excuse it now. After all, we disregarded the dead man's wishes to be entombed for eternity after more than 3,000 years. And besides, his soul moved on into the afterlife. Or life just ends when it ends, and burial is an archaic tradition that doesn't benefit anyone, and a corpse no longer has a right to property, let alone privacy or dignity.

The two people who have edited this new anthology of Cather's letters claim, "These lively, illuminating letters will do nothing to damage her reputation... [they reveal her as] a complicated, funny, brilliant, flinty, sensitive, sometimes confounding human being."

Someday, I wonder if I will regret all the things I tossed up on the blinking, shouting billboard of the Internet. I wonder whether this blog will haunt me. Whether it reveals me as a "complicated, funny, brilliant, flinty, sensitive, sometimes confounding human being" may not matter. I've written about patriotism, faith, family, and marriage, and I've done it with wide open eyes and a sense of great conviction. But maybe my future children won't want to learn that their father and I tried as hard as we could NOT to have them, delaying their existence for more than a decade while we ran around the world having fun. Maybe writing about my teenage struggles to menstruate without upsetting my parents' standards for a pleasing bathroom experience is a bit too much info.

This is the price we all pay for living in the Information Age. It's the price that Ms. Cather's estate will pay now, too. And as the practical benefits to everyone else will easily outweigh the desires of a woman long since dead, I'll probably even buy the book. Hopefully, it will ease the angst of Ms. Cather's soul to know that I will continue to know her primarily for My Atonia and Oh, Pioneers !