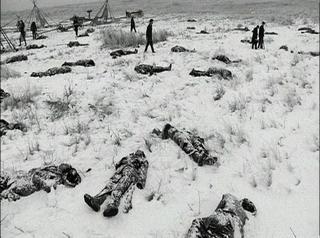 Please stop waving your selectively-historical, emotional arguments in my Facebook. It's irresponsible. I'm referring, of course, to posts which are intended to promote our Second Amendment rights by referring to historical atrocities which, allegedly, bear some resemblance to what's about to go down in the United States.

The most recent I've seen is a tidbit titled A Little History to Think About...

A lengthy caption runs under a black and white photo of the carnage after the massacre at Wounded Knee in December of 1890. Dead bodies litter the snowy ground. The burned skeletons of empty teepees lean in the wind. Members of the U.S. 7th Cavalry, perpetrators of the violence, walk through the scene, hats still on.

The 7th Cavalry ended the American Indian Wars by slaughtering the Lakota at Wounded Knee. Depending on where you get your information, the massacre may have started because one Lakota tribesman refused to give up his gun. And so, about 300 natives were killed, according to this Facebook post, in one of "the first federally backed gun confiscation attempts in United States history."

The person who wrote the inflammatory text accompanying this photo didn't sign his full name. (Once or twice he misspells Cavalry as Calvary . I suspect this is an accidental irony.) And he draws a bloody line of connection through the dots of history which begins in Biblical times, with Cain's murder of his brother Abel. What surprises me is not that the author roots his indignation and fear in religion, but where else he feels his greatest fear has been mirrored in the past. An excerpt:

"Evil exists all around us, but looking back at the historical record of the past 200 years, across the globe, where is 'evil' and 'malevolence' most often found? In the hands of those with the power, the governments. That greatest human tragedies on record and the largest loss of innocent human life can be attributed to governments. Who do the governments always target? 'Scapegoats' and 'enemies' within their own borders...but only after they have been disarmed to the point where they are no longer a threat. Ask any Native American, and they will tell you it was inferior technology and lack of arms that contributed to their demise. Ask any Armenian why it was so easy for the Turks to exterminate millions of them, and they will answer 'We were disarmed before it happened'. Ask any Jew what Hitler's first step prior to the mass murders of the Holocaust was- confiscation of firearms from the people."

The thing is, dear Gun Rights Advocate, anyone who thinks there's a legitimate chance that our government is going to send in the cavalry to take away his guns really ought to be taking bigger steps to thwart them than pointing to pictures of the massacre at Wounded Knee. I'm willing to admit that a person's paranoia doesn't always make him wrong, but unless he's willing to leave the country to escape this impending/potential tyranny, and unless he actually thinks "1776 will commence again," I question his convictions.

Gun-owners in the United States are not the Jews before the Holocaust. That self-comparison is so ignorantly insensitive to the history of global antisemitism, it actually makes me ill. Nor are they the Native Americans about to lose their home and history to a far more powerful population of invaders.

It interests me, though, that these are the groups a once powerful gun-owning block of the American population (majority politically conservative) must now identify with. In the first place, both scenarios include governments stripping a minority of its weapons while allowing that minority's opponents to maintain their arms. This is NOT happening in the United States today. And in both cases those governments were motivated by a hyper-conservative dogma (Manifest Destiny in the latter case, antisemitism in the former) which justified genocide.

Dear Gun Rights Advocate, you're not concerned about being a victim of genocide. Neither is any other gun-owner in America.

That you've retreated to this emotional response is evidence only that your position has weakened. You claim to be defending the Second Amendment, an original portion of our Constitution. That makes your claim to your weapons a legitimate one without these selectively emotional tactics. At least until we change the law. Until now it's been people on my side of the issue, those calling for bans on assault weapons and curbs on the size of ammunition clips, who have been pointing to emotional scenarios as evidence in this debate. And ours are more current (and more difficult to argue with), like the three major mass shootings in 2012 ( Connecticut , Colorado , Wisconsin ). Perhaps our progress makes you feel like emotion is what sells.

But I think this debate is too important to leave to those who would be moved more by emotion than by fact. Comparing yourself to one of the six million Jews exterminated during Hitler's Holocaust is a crime against the real victims and their descendents. It is also irresponsible. Such contentions will only serve to fire up a base of like-minded people who don't understand the true particulars of history. As the expression goes, those who aren't aware of history are destined to repeat it.

What happened at Wounded Knee is not, as you claim, "[a] prime example of why the Second Amendment exists, and why we should vehemently resist any attempts to infringe on our Rights to Bear Arms." To grasp this scenario and hold it aloft as some kind of banner for your side, you passed over almost 200 years of American settlers overrunning lands previously occupied for centuries by native tribes. Those tribes were no match, technologically, for repeat-shot rifles, canons, fortresses, or the Iron Horse.

Before you claim that the victimized Lakota are your brethren in this age-old fight to keep and bear arms, first remember that they were not recognized as American citizens and had no voice in our fledgling democracy. Then remember that it was a set of selfish, conservative ideals that nearly starved the native tribes out of existence, stole their land, decimated their way of life, and disarmed them. The Lakota Sioux never had a fighting chance. You, an American citizen in a civilized society, absolutely do.

I'm not arguing that you shouldn't be allowed to own guns. But I think there should be a limit to the number and the type, and I think you should have to provide ongoing proof of stable mental health, as well as be required to train to use the weapons you have effectively and safely. I may not feel like I need to own a gun in Norway, but it's possible that, if/when I move back to America, I'll feel the need to protect my family. But then, as well as now, I would prefer to keep this debate on firm footing in the present tense, between reasonable people.