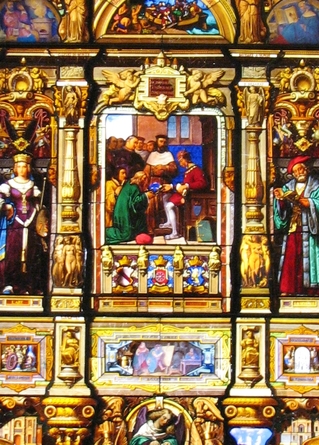 These cries bring me to the window of my rooftop flat. The first English words I have understood within a burbling stream of mournful chanting. I learn toward the opening of the window, four inches, no more. The morning air meets my face, cool. The sky is blue and streaked with breezy, insubstantial clouds. It is early on Saturday, and I've been awake for less than fifteen minutes. The street far below me is empty, but I am not alone.

It's uncanny how my mind separates the parts of this moment into pieces and analyzes them for me. The voice is a man's. A young man's. He is crying. I've been listening to him slyly, almost ashamed to be a part of something so private for a person I cannot know and do not, in fact, even see. This young man lives in one of the apartments across the street. He is exhausted. I can tell by the warbling crack in his voice. I am free! He stresses the word 'am,' and thus, he is less stating fact than he is pleading for it to be true.

The words come like a torrent. They are unending and mostly unintelligible to me. Another language, one with a thousand undulating foreign sounds. I scan the windows in the building across from me. A few are flung open; French doors on small balconies. In the floors that are lower than mine I can make out furniture shapes between curtains. A mirror above a fireplace. Coffee cups on kitchen tables. Nothing to signal the presence of a lonely, frightened mourner.

I live a life of value! I do! It is mine! And I am valuable!
These sound like affirmations. The things we say to the mirror to build ourselves up before an important morning at work or after a break-up. Sometimes we say them to talk ourselves down from the ledge. But what I hear is so sad. In my mind, I've begun to refer to the man chanting as Mourner. I can picture him. His eyes are bloodshot and filled with tears. He is overwhelmed by emotion, probably amplified by lack of sleep. He has lost someone or something, and he spins frantically from corner to corner in his apartment. Hands fall heavily onto objects on tables and bookshelves. Books rotate back and thump onto their spines. Fingerprints smear the dust on lamps left untouched during this long-light summer. Framed photos of smiling faces clatter facedown.

In you I am holy! It is my divine right! Mine! It is mine!

This is a filibuster. I picture Jimmy Stewart as Mr. Smith on the floor of the Senate, bunches of fraudulent telegrams crumpled up in each hand. "You think I'm licked. You all think I'm licked!" he hollers.

Mourner never stops crying out. A human trumpet played by a breathlessly fatigued spirit. For a few minutes I wonder whether this is a recording. It seems too ceaseless. Then there's the juxtaposition of the message, so positive, with the tone of Mourner's voice, so desperate and alone. But it isn't a recording. I can tell that Mourner is moving. Sometimes he turns away from me, and the turn dampens the volume of his voice. Sometimes he sobs between words. I can feel the red-raw crawl of oxygen down the back of his throat every time he inhales.

I am free, o righteous god. In you I can stand!

I wonder if Mourner is from some country in the Middle East. Or perhaps that is only true of his god. I still can't see Mourner, but the language he fairly shrieks between these English affirmations is not Norwegian. And who else besides a Christian or a Muslim would allow himself to get so worked up in a conversation with god?

I also can't imagine why he would take the time to switch between languages while so deep in prayer. Or is this prayer? Perhaps you wonder why I believe I can picture what Mourner is doing behind the walls of his apartment as he wails at the ceiling. Would you believe me if I told you I've been among people wailing like this many times in my life? That at church camps and Christian conferences this kind of emotional, outward, hysterical capitulation was encouraged. That I myself have stood shaking like an aspen in a forest of my peers, tears streaming down my freckled cheeks, beseeching the Lord aloud. Oh yes.

The tram rumbles by and for a moment I have lost the frayed sound of Mourner's voice. But there it is again. And I've dragged Jonathan from his bed to listen, because I want to be sure I'm not imagining this. I have begun to fear that Mourner's hand holds a gun. It glints black and heavy, and his long index finger curls around the trigger. I don't know what makes me think he is veering toward violence. Maybe it's the inhuman way he's managed to yell religious nonsense for fifteen straight minutes. Maybe it's that, even in the constant affirmative, he sounds utterly unconvinced.

He steps back and looks at me, one ear still cocked toward the sound. I lean forward. He's right. Mourner has switched back into his other tongue. We wait another full minute, but understand nothing more.

But it was. It has been English. I understood him , I say. Something urgent is rising within my chest. He said, 'O righteous god, I believe! I am free! I live a life of value!'

Jonathan nods but looks away from me. He is skeptical.

Mourner's voice is unraveling. Every ululation is ragged. But he hasn't stopped. And now I wonder if I actually understood anything at all. Is it possible that his desperate, seeking tone triggered my own memories? And that what I believed I heard hinged on my own experiences? My past religiosity, at one time more frantic than devout, is something I rarely acknowledge now. But I have witnessed men with poisoned-tongues leading prayer in a hall of thousands. I have seen people attempting to cast demons out of a girl who writhed and screamed under the constraints of her captors' hands. I have felt the weight of bodies around me as the faithful succumbed to the heat and the fervor of ritual, and collapsed to their knees, their bellies. Abject. Prostrate. Nothing, in the face of the invisible divine.

Adrenaline moves within me. Also invisible. Once I might have mistaken it for the hot hand of the spirit guiding me to action. No longer.

Over the last year, walking along my quiet street in Oslo, I've heard many things from within the apartment buildings on either side. Piano lessons. Karaoke. Clinking glassware. Gregarious families cheering on their favorite football teams. Laughter. This morning, I heard a man reach the unraveled end of his spiritual rope. I heard him entreat his god in two languages. And I believe that what brought me to my own window and made me search for him was the sense that I understood his pain. The words were also my own. He was lonely, and I wanted him to feel the presence of someone besides his own silent god. That I knew he wasn't licked. That somebody was listening to him.