I write in the margins and on the blank pages of books authored by other writers. It's a habit. When I happen upon those scribblings later, it's always a treat. The following is an essay I penned on a trip to Northern Italy in 2009. All summer long I'd been following the Green Revolution in Iran. I'd seen the blood pool in the street beneath the body of Neda Agha-Soltan after she was gunned down during a protest in June. Her death scarred me. I wanted to know about the lives of other young women in Iran. To that end, I picked up Dr. Azar Nafisi's Reading Lolita in Tehran to read on our vacation...

I am seated on a bench in the northern Italian mountains. There is a white church steeple and a brass weather vane in the shape of a rooster straining in the brisk wind. Muddy brown sparrows hop from branch to branch in the midget pines to my right. Jonathan's head is tilted back and his eyes are closed. We are waiting for something, breath bated, and hopeful.

Clouds engulf the head of Monte Cervino, the exotic Italian name for this side of The Matterhorn. Even as the radiant blue sky is visible over our heads in all directions, a remarkable dome, this mysterious mountain is coy. She has wrangled her own weather this morning and wears it like a white headscarf. For an instant, she reveals her eyes. She watches me. I am yearning for more, lusting for her full, perfect face. But she is well aware of her status as a check box, one of many on this trip, and isn't about to give me the satisfaction. That's her call. I snort with ambivalence and, in response, she tucks even her pretty, snowcapped eyes away from us again.

While we wait, I read. Reading Lolita in Tehran has accompanied me every mile of the way on our trip through France, Monaco, and Italy. The 2003 memoir by Dr. Azar Nafisi chronicles the clandestine activities of a group of young Muslim women in the mid-1990s. In search of literary truth and personal independence, they risked their safety to congregate in the private home of their teacher. There they could shed their heavy scarves and robes, sit in a circle, and study the great novels of history.

A verbal scalpel slices the cover of Lolita and allows the students to see past the prose and into the heart and guts of the work, its intentions and its context. I can recall the cover of my own copy of Lolita, Vladimir Nabokov's masterpiece, purchased at the UC Davis bookstore at the beginning of my junior year. It is a photo in grayscale, saddle shoes and girlish ankles. Tiny white socks folded down in delicate cuffs.

Reading Lolita in my Introduction to Literary Criticism class startled me. Humbert Humbert, the perverse romantic, the child rapist poet, was the first narrator to make me feel sick. I wanted to hate the book. I wanted to plant my feet staunchly on the moral high ground and pitch the book into the fire.

It took a good teacher to change my mind and heart.

I cannot remember his name, but his gait, crippled, lurching and rolling, is burned into my mind's eye. He'd been in a bicycle accident as a child, shattering his fragile leg bone beyond hope of anything more than a cursory repair. Yet, thirty years after that event rendered him weak and unstable for life, he paced the breadth of his classroom at Davis without more than a nod to his disability, and he willed his classful of eager English majors to reconsider Lolita as something more than the senseless ramblings of a pedophile.

He wanted me to mine Humbert's grotesque justifications for something deeper. Consider the author's intentions, my teacher urged me. Nobokov was not a depraved man with a penchant for little girls. Nabokov didn't want to suck the marrow from the skeletons of their fairy tales. He was a Russian author with a genius for gaining access to another plane of thought and fancy, and he excelled at granting that access to his readers in turn. Nobokov invented Humbert as he invented so many other protagonists. He constructed an individual dispossessed of the stranglehold of our realities and allowed that individual to run free.

Nafisi introduced this same concept to the young women who'd gathered in her cozy, curtained apartment in Tehran. Her six students also struggled with appreciating Lolita as something other than the confessions of a sexual predator.

"Why do we enjoy books like this? Isn't that wrong?" they asked each other.
Nafisi answers these questions by calling up a quote by Nabokov himself. Every story is a fairy tale. It presents goodness and wickedness at odds, which in and of itself is reminiscent of real life, but then also provides the "potential to surpass present limits... [a fairy tale] offers freedoms that reality denies." (47)

Here, it is important to remember that she was sharing this insight with young women whose reality offered very little in the way of freedom. When Nafisi describes their Thursday rendezvous at her apartment, she details the décor of the room, the sampling of desserts served with tea, but she spends the most time describing the entry of each girl to the session. It is an uncloaking ritual. Where moments before only meek, downcast faces were visible beneath the scarves and the shawls, one pass through Dr. Nafisi's hallway reveals each girl a Venus. They push through the crust of leveling earth as flowers. Colorful t-shirts, jingling earrings, designer jeans, a taut midriff, curled hair, a swirl of perfume. They are vibrant individuals, and their metamorphosis is due to the fairy tale environment crafted by Nafisi.

The reality those young women left behind each Thursday was post-revolution Iran, a country descending into a regimented, hyper-conservative, religious rut. Their dreams of scholarship were pushed aside in favor of a militaristic enforcement of humility and modesty. When entering their university campus, these girls were forced to walk through a separate gate. They were judged by female guards who patted them down, looking for contraband hidden within the folds of their robes. They were slapped, ridiculed, expelled for wearing nail polish. Dr. Nafisi also endured these humiliations for months before tossing in the towel and refusing to allow the increasingly conservative student body to censor her curriculum.

My sense of entitlement as I sit cross-legged on this bench suddenly seems laughable. I arrived here expecting a mountain to expose herself to me simply because I stopped by for the morning.

But that's my life. Independent. Entitled. Every day, I expect to be able to drive, to read my books, to sing loudly along with my car stereo, to loop my affectionate fingers through my husband's hair in public, to travel, to attend a university and walk through the same door as my male classmates, to debate with my elders, to make money, to choose whether to have children. I expect all of these things with the first conscious inhale I take every morning.

As well I should.

Nabokov wrote Lolita in a voice completely unique to the genre. He opened the lonely, tormented mind of a man who pursued a wrongful dream and harmed a child. Some would call his tale pornography. I would call it creative and, more importantly, necessary. It will never be my favorite book, but it lives on my shelf alongside hundreds of other well-read volumes, and I've opened it many times over the last few years. Knowing now what young women in Iran have been through, and what curious, earnest students of all genders have suffered in any country where books are censored, I am happy to own Lolita. It's tame compared to several other books I own these days, and that's important, too. Censorship of the written word is the last halting, unnatural step before the censorship of thought and speech.

We left Monte Cervino to her cloistering late in the morning, but Jonathan returned the next day.

I was packing for our drive back down the mountains and across the border to Geneva. It was going to be quite a day, and I wanted to get off to an efficient start. When Jonathan returned, he had a gleam in his eye.

As he'd rounded the bend into town, his only goal to retrieve some cash and grab a bite to eat, Monte Cervino had dropped her shyness like a bath towel. She emerged from the clouds in a craggy, powerful burst of blue stone and white glaciated snow. She was brazen and fierce, flirting with my husband, a man whose real weakness is the wilderness. She played for the camera as he snapped a few quick shots to bring home to me. Through my disappointment at missing the spectacle in person, I couldn't help feeling a thrill. Monte Cervino was absolutely free. Whether cloaked or disrobed, she knew her own boundless beauty. 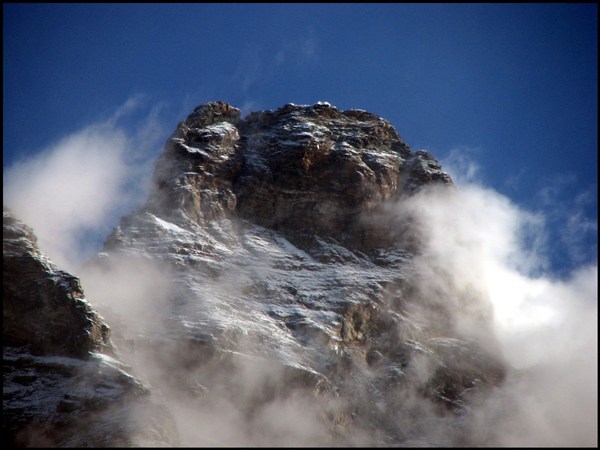 In Dr. Nafisi's living room, she taught Lolita , The Great Gatsby , and a million more "controversial" novels. Books she'd been prohibited from teaching in her classroom at the University of Tehran. More than allowing her students a chance to let their hair down, and more than giving them a free forum in which to discuss the sociocultural analysis of the classics, she presented them with the knowledge that knowledge is power. Even beneath a heavy black robe. Beauty is about intelligence and discernment in spite of the chaos of the world. Freedom of the mind is most important.

When they departed, the girls donned their scarves and robes once more. They exited the sanctuary. Again they appeared to their restrictive society as uniform, humble, modest. But thanks to literature, to authors who took risks, and to a teacher who took the greatest risk of all, that handful of young women found their own potential to surpass those limits. They learned how to rise above their reality and continue to think, to remember that freedom is the single most precious and imperative goal.